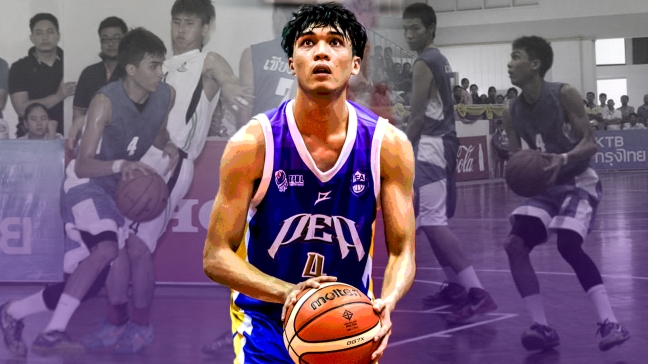 Every place has its own meaning to each separate person.

For me, my first time at the Chantaburi Stadium was the venue’s debut as the home of the Mono Scorpions against PEA Basketball Club in the TPBL. It was a fresh experience for Thailand basketball reaching out to a larger group of fans.

But that was only me.

This stadium was used as the venue for the 31st Thailand National Youth Games hosted by the province of Chantaburi. Eaktanat was the star of the Chiangmai basketball team that made it all the way to the championship game. Though they eventually lost to a stacked Bangkok squad, it was a great experience for him nonetheless.

“I was really impressed with the people of Chantaburi,” Eaktanat recalled. “Every game, no matter who was playing, they would fill up the stands. It showed that the people here really love basketball and they cheered the whole time. It pushed us to play our best to not disappoint the fans who were watching.”

Despite the title game loss, Eaktanat’s play won the hearts of several fans in attendance. The speedy guard said that he had already packed his clothes in preparation to return home after that game, so when fans asked for his jersey, he didn’t hesitate to comply.

4 years passed by since his last time playing at the Chantaburi Stadium and here he was again, back at this place of memories.

“I felt excited coming back to play here after 4 years,” Eaktanat said “I wanted to see if the people that watched me 4 years ago could still remember me and I wanted to find out whether the kids that got my jerseys were still following their basketball dreams.”

“When I came out to warm up, the good feeling was still the same. The people of Chantaburi are still excited about basketball and you could see it in the stands that were full as well as the loud cheering.”

Maybe it was that positive energy that boosted Eaktanat to a strong start in this game. With his very first touch, just 10 seconds into the contest, he drilled in a three-pointer from the right-side wing. Only a minute later, he splashed in another three from the left corner.

Eaktanat scored another 2 points before Coach Krit Isariyacheewin subbed him out for a breather to close the opening quarter. Not bad for his first 10 minutes of action.

“I wasn’t feeling anything at that moment since I was focused and defending Freddie Lish. But when the game ended, [that quarter] kind of felt like going back to play at the Thailand National Youth Games.”

“Back then, it felt like I had to score at every opportunity since I was the team’s scorer. Now it’s different since I have to be more of a playmaker, creating opportunities for my teammates. I kind of forgot what the desire to score felt like.”

At the final buzzer, the 22-year-old guard finished with 9 points, 5 rebounds, and 1 block as PEA claimed a 72-64 win to open the TPBL season.

Aside from celebrating the victory, Eaktanat enjoyed meeting some fans that had cheered on for him 4 years ago when he was still just a teenager playing for Chiangmai.

“After the game, there were 2 people that I given my jerseys to that came to watch. It felt good to know that these people still remembered me after all these years.”

“I was a bit disappointed that some of the other kids I gave my jerseys to didn’t come to the game since I wanted to know whether they were still playing basketball or not. I wanted to know if I had been able to motivate them. Knowing that can push me to keep on improving so that hopefully I can inspire even more people.”

That day, there were no kids that walked up to Eaktanat To-Ngiw to express that their path in basketball was inspired by him. But if he continues to improve rapidly as he has done over the years, he surely can become a role model for the next wave of ballers.