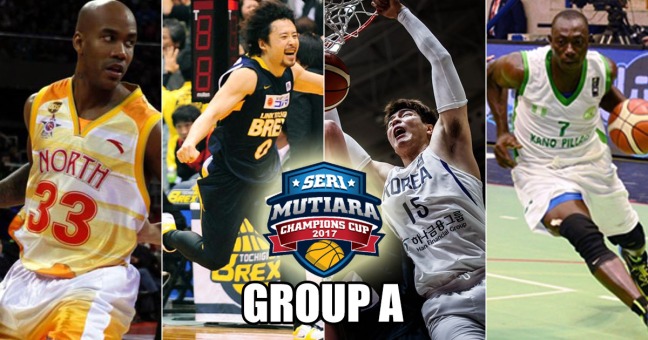 The Seri Mutiara Champions Cup is set to tipoff let’s take a look at the teams in Group A of the tournament!

The international invitational tournament hosted by NBL Asia is boasting what it claims to be the strongest ever playing field in it’s 3rd year of existence… and for a good reason. The two groups are the tournament are packed with champions from different leagues and some highly recognisable stars.

The group stages of the tournament will be played from 12-14 September. Teams will battle to determine the top 2 clubs that will advance to the playoff rounds which will be played on the 16th before the Final Showdown on the 17th.

Let’s take a look at each team in detail:

Again, I really wish I could say I know more about the Kano Pillars of Nigeria… but I have to admit that I still don’t. And that’s why watching them play in the Seri Mutiara Champions Cup is going to be interesting.

Not only for the chance to get to know who the Pillars are, but also for an opportunity to gauge the difference level between club basketball in Africa and Asia.

Most recently in the 31st FIBA Africa Champions Cup 2016, the Kano Pillars finished in 4th Place.

I could pretend to know more about the team, but this is as much as I know so far.

I really wish I could pretend to know more about this entire line up but… nope.

On a more serious note, the Key Player worth mentioning is Usman Abubakar whose name seems way much more easier to pronounce. The 31-year-old shooting guard was the team’s leading scoring with 18.3 points per game in the FIBA Africa Champions Cup and logged the most minutes as well. While that seems impressive (along with 4.7 rebounds and 3.1 assists), it should be concerning that Abubakar is also shooting only 28.6% from the field. He makes it up with a monster amount of three point shots (10.7 attempts per game) and being a great free throw shooter (95.2%).

If Abubakar turns out to be the Pillar best offensive weapon, they might be in for a long tournament.

Here’s is the most important thing about this team.

The “Brex” in the team name comes from:

That has to be the most disappointing explanation of a team name ever since I had always been picturing some connection between a TRex playing basketball (this is a team from Japan, by the way, so anything was possible).

Tochigi Brex formed in 2006-2007 and won their first National League title in 2009-2010. They were most recently crowned champions of the Japanese B.League this past season boasting the league’s No.1 defense.

The Brex (that name is catching on) will be parading 3 World Imports: Ryan Rossiter, Kyle Richardson, and Cedric Bozeman.

According to the internet (which is sometimes not reliable as it should be), Richardson recently played in the third division of the B.League for the Otsuka Alphas Tokyo so playing here for the Brex might be a try-out of some sorts.

This will be considered a return of some sorts for Cedric Bozeman, who played for the Westports Malaysia Dragons (ABL) back in 2012-2013. The 34-year-old former McDonald’s All-American (!) has had a long and twisting career going from the NBA, Belgium, Poland, China, and the Philippines (Hi Ginebra Fans!). Now he is now enjoying a lengthy career in Japan, where he has played for the last 4 years for several teams.

Ryan Rossiter has been a mainstay Import with the Brex having played with the team since 2013. The 27-year-old has been a steady force for the Brex over the past 4 seasons, recently averaging 17.1 points and 13.0 rebounds.

It won’t only be about the imports for the Brex. They will also have “the Japanese Steve Nash” (dubbed by Ryan Rossiter), Yuta Tabuse. He’s widely known as the first Japanese-born NBA player (though Japanese-American, Wataru Misaka, was actually the first Japanese Player to ever play back in 1947) and while that was more than 10 years ago, the 36-year-old still has enough tricks up his sleeves to be one of the top point guards in the country. Tabuse peaked in 2013-2014 where he averaged 15.4 points and 5.9 asissts for the Brex and has been steadily giving way for younger players since. He averaged 7.2 points and 3.4 assists in the B.League last season.

Another standout local player for the Brex is Kosuke Takeuchi, who is considered the the top big man in Japan. He’s been a mainstay on the national team since he was 20 years old and he still plays a huge role for the team, recently averaging 7.3 points and 5.5 rebounds in 18.8 minutes per game in the FIBA Asia Cup 2017.

The LG Sakers are among one of the most popular basketball clubs in Korea. They’ve been around for more than two decades (formed in 1994), but it’s surprising that they’ve yet to secure a KBL title yet. Despite that, the fans are local as the Sakers have been among the top teams in the league in fan attendance.

For those who must know, a Saker is a falcon (also endangered) which explains the team’s logo.

I’m totally more convinced that the team owners decided on the name Sakers because it sounded like Lakers though.

The Sakers will be highlighting their storied Import, Josh Powell, who may or may not have signed this contract after a typo which confused him into thinking he would be signing for the Lakers.

Jokes aside, Powell will forever be mentioned as a two-time NBA Champion with the Los Angeles Lakers from 2008-2010. He bounced around the league and around various leagues around the world (including 2 games with Barangay Gibebra San Miguel!) before ending up here with the LG Sakers. Aside from being an NBA Champion, Powell also has claim as a Euroleague Champion as well when he played for Olympiakos in 2013.

(I hate the fact that Googling “Josh Powell” doesn’t get you to the player but a long list of tragic news and the first video you get when you Google “Josh Powell Basketball” is a video titled “Josh Powell is the worst player in NBA HISTORY“. Dude should consider a name change)

The Sakers other import is Justin Tubbs, who has a cool last name but is obviously not as recognisable as Powell. Tubbs is a point guard who is known for his athleticism and has played in Greece, China, and other Middle-Eastern clubs in the past 6 years.

Powell and Tubbs will also have two of arguably the best Korean players playing on their side in the Seri Mutiara Champions Cup.

Kim Jong Kyu is one of the brightest young big men in Asia and has shown steady improvement over the years with the Korean National Team. He’s not a bruising big man, but he’s a great fluid rim runner with decent shooting range.

With Jong Kyu playing down low, the Sakers will have Cho Sung Min ready to be firing away from the perimeter. Sung Min was a mid-season acquisition for the Sakers last season in a move that was planned to push the Sakers deep in the playoffs. Unfortunately, the 34-year-old suffered and injury that derailed the Sakers from their ambitious goal. When healthy, the National Team veteran is considered one of the best three-point shooters in Korea Basketball (which says a lot).

Note: A recent update has also been rumored that Cho Sung-Min might not be on the roster after all. Sad.

The Beijing Fly Dragons were pretty miserable last season in the CBA, finishing in 17th place.

But that’s all about to change! Or that’s what they hope will happen after signing 40-year-old Chinese Basketball Legend, Stephon Marbury, during the off-season

Sadly enough, a Fly Dragon is not part-fly-part-dragon but it’s just merely a flying dragon.

I have to admit I never realized that Marbury’s middle name was Xavier. While that is not important, the fact that he’s playing for the Beijing Fly Dragons instead of the Beijing Ducks is.

For whatever people say about Marbury and his time in the NBA (19.3 points 7.6 assists per game jfyi), he is now one of the few people in the basketball world that can claim to have a statue built in his honor.

This was a result of leading the Beijing Ducks to their first ever CBA title. Marbury would lead the Ducks to two more titles, but you have to realize how awesome he must have be to get a statue after just one championship winning season. Here’s a list of other awesome things about Marbury in China which also includes playing himself in a musical.

If you can’t tell, I am a big fan of Marbury and his awesome career turnaround.

The scoring load for this team will most likely be piled on Shavlik Randolph, another NBA veteran. The Duke alumnus played here and there for 10 seasons in the NBA (with some sprinkles overseas) and has now found a home in China where he has played in since 2015. Randolf led the CBA in scoring back in 2012, where he averaged 32.0 points per game.

Chin-Min Yang is technically another Import, since he’s Taiwanese but whatever. The ex-Taiwanese National Team player averaged 11.6 points in 33.6 minutes during the past season, his first with the Fly Dragons.

Seri Mutiara Champions Cup 2017 Group A: Things to Look For

Beijing Fly Dragons will top the group undefeated.
Usman Abubakar will have one game where he takes 20 three-point shots.
LG Sakers will lead the tournament in photos with women fans. Especially Kim Jong Kyu.
Realization that Marbury and Tabuse were one year apart from being team mates with the Phoenix Suns.
Josh Powell walking around to Marbury and Randolph just to casually bring up his two NBA championships.
Emcee at MABA Stadium cranking up an ABBA song after Zaid Abbas scores for no reason.
Fans wearing retro KL Dragons jerseys taking pictures with Cedric Bozeman.
Justin Tubbs winning the Seri Mutiara Dunk Contest by dunking over a tub.

Check out the Preview for Teams in Group B here!

One thought on “Seri Mutiara Champions Cup 2017: Group A Preview”