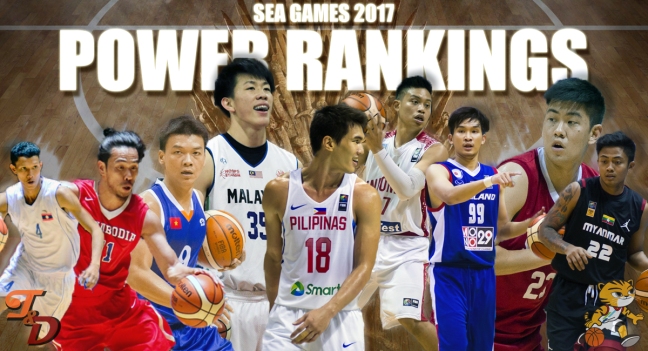 With less than a month to go before the tipoff of SEA Games 2017 Basketball (which will be held from August 20-26), I figured that I might have some fun with a majority of the roster from each nation slowly resolving themselves out.

So for the next 20 days, I’ll try to churn out Power Rankings of all the participating nations based on what we know about each respective team so far.

So let’s get started with our power rankings!

Laos basketball has potential (there are a surprising number of players with Laos heritage playing in the States) and the national team management that I have crossed paths with certainly do seem to have the right mindset in building the sport… but it’s going to take time.

It’s hard to read at what Laos is currently working with since the last time we saw the Laos senior squad was at the SEABA Championship 2015 where they only managed a win over Brunei to avoid the bottom spot.

There’s no Brunei to look forward to face in this SEA Games and Myanmar is on the other side of the table in a different group, so expect this to be nothing more than an experience gaining journey for the Laos side.

One thing that Myanmar has going for them is constant participation in the big stages. They haven’t been able to do much damage, but at least they have participated in the SEA Games 2015 and SEABA Championship 2017.

Again, I don’t really expect much out of Myanmar (especially being pitted against the Philippines, Thailand, and Malaysia) but it’s going to be interesting how much improvement they can show in this tournament.

Wana Aung was a semi-sensation during the SEABA Championship in a cute way with his athletic scoring prowess and zero interest in defense and that’s something to look forward to in SEA Games 2017, if he still makes the roster.

The buzz about Cambodia is that they are rolling out ten US-based national team players in their roster. While that does sound very intriguing, it’s not something new.

There are only a couple of new faces on this National Team squad (Daniel Meas and Tommy Chea) so unless they are extraordinary talents, I don’t see how the Cambodia National Team are that much improved from their last run in the SEA Games 2015.

Pek Mith is going to be their leader and he’s trying to help build up a good program but the team’s (and players’) overall lack of consistent competitive play and training will be the main factor that’ll hold them back.

My gut feeling thinks that Vietnam can do a lot better than 6th but there’s too much to question about how well-prepared they’ll be.

The reports are that Vietnam will be able to field Horace Nguyen and Stefan Nguyen (ABL standouts with Saigon Heat) along with Tam Dinh (VBA standout with Can Tho Catfish) which would form a solid core in their starting five. Getting Todd Purves to coach the team along with his well-coached Hanoi Buffaloes players is huge, too. The Vietnamese basketball scene as a whole has benefited much from have their own professional league as well as their consistent participation in the ABL which we should be able to see in display in this SEA Games.

BUT (you knew there was a but) it’s just not quite clear how well prepared they are going to be. While Horace, Stefan, and Dinh will most likely be able to hold their own against the competition, the rest of the squad will need more time to gel and get ready. For the meanwhile, it just seems like Vietnam is a little bit behind in terms of preparation.

I’m not really sure how to feel about the Singapore National Team. The players have done so well in the ASEAN Basketball League scene as locals that you would expect them to eventually breakout in National Team play.

After mixing up squads in other international competitions, Singapore was finally able to field an nearly full squad in the SEABA Championship… and they still weren’t able to display what fans expected.

Maybe it was the fatigue of another heartbreaking end to the ABL season. Maybe it was just not the same playing without a dominant bigman (Justin Howard) and a do-it-all guard (Xavier Alexander). Maybe it was just playing under a new coach in his first tournament. Whatever the case, I was less impressed with Singapore coming out of the SEABA Championship than going in and that’s where my expectations begin here in the SEA Games power rankings.

Singapore’s build up towards SEA Games with a training camp in Manila, a healthy Mitchell Folkoff, and a fit Russel Low might be able to change my mind later on.

Thailand’s SEA Games preparation has been headlined by the inclusion of Freddie Goldstein and Tyler Lamb into their 16-man preliminary roster which should really boost their spot in the power rankings to higher than 4th… but there’s too much else going on that’s grounding them here for now.

Among the teams with contender status, Thailand started their training camp the latest. Their ex-Head Coach Tim Lewis was axed out of the blue with only a month to go before the competition, leaving big shoes to fill in. Douglas Marty and Piyapong Piroon should be able to fill in the void for now, but it’s not going to be an easy task.

Thailand will still be a pretty formidable team based on raw talent, especially with the addition of the two Thai-Americans and rising star center Chanthip Jakkrawan. My main concern is more about the aforementioned coaching and about the limited timeframe for preparation. While other contending teams will have at least one competitive training camp overseas, there seems to be no plan of anything similar to that for Thailand at this moment.

It’s going to be a pretty tight race at the 2nd,3rd, and 4th spot heading into the tournament. For now, Indonesia holds a slight edge over Thailand due to how far they’ve gone to prepare for the SEA Games and how long they’ve been practicing together.

This will be basically the same Indonesia team that got Silver in the SEABA Championship despite having very little practice going in. They were able to beat Thailand despite not having both Arki Wisnu and Jamarr Johnson, and that’s where their main edge over Thailand is.

They’ll be losing some size after replacing Jamarr Johnson, but with rumored chemistry issues, Indonesia might be better off replacing him with Biboy Enguiao who won Silver with Indonesia in 2015.

With one training camp in the United States of America already completed earlier last month and having just started another training camp in Lithuania, Indonesia is primed to be among the most prepared team in the SEA Games in addition to being one of the most talented.

To be blunt and very straightforward: Malaysia is not as talented as Thailand and Indonesia. While it’s not a steep drop, I think that it’s not too crazy of a statement to make.

What solidifies their runner-up spot in this edition of the power ranking, however, is their preparation and the fact that they are the hosts of the SEA Games.

Malaysia has already held an invitational tournament against decent competition at the SEA Games venue (MABA Stadium) earlier in June. Other than that, they are also wrapping up a training camp in New Zealand which climaxed with a final game against a Select New Zealand team featuring stars like the Webster brothers and Isaac Fotu. Those two productive runs should be able to give Coach Goh Cheng Huat most of what he needs to know about his team.

Another major factor why Malaysia should not be overlooked is that they are going to be the hosts of this tournament. They will be playing on the court that the players have basically lived at for the past months in front of a crowd that will always have their backs. And let’s face it, the refs will be wavered to give at least some home court favouritism in these sort of situations.

With that said, Malaysia being hosts doesn’t take anything away from the talent that these players have. This is a young special group of players who has had proper preparation to play in an environment that will only aid them in their quest to dethrone the reigning King.

Surprise potential addition Perry Lim might not be an instant superstar but if he makes the final 12 player cut, I feel like he could add a new dimension to Malaysia’s style of play.

Were you really expecting anyone else to top the power rankings?

Sure, the other nations have improved by leaps and bounds but even then, the Philippines still feels a bit out of range. It doesn’t really help that the Philippines has kicked it up slighty another notch after some scares in SEA Games 2015 that featured a line up made up of collegiate stars.

In this SEA Games, they will be fielding 11 professional players (7 PBA players) with the lone amateur being Kobe Paras. Kiefer Ravena, Troy Rosario, Kevin Ferrer, Baser Amer, and Almond Vosotros were all on the SEA Games 2015 Gold Medal squad and their performance will be a decent barometer to gauge how much other nations have improved since.

Most of the SEA Games squad have just completed their run in the William Jones Cup where they finished 4th.

SEA Games 2017 is the Philippines’ to lose and while the gap between the South East Asian Kings and others have inched in a bit closer, it seems like theirs no need to push the panic button… yet.

The rankings (or at least some of the spots in the rankings) are bound to shift and change spots as we get closer to the SEA Games 2017 and as the line ups are “officially” released, but this is how I view the teams are stacked up right now.