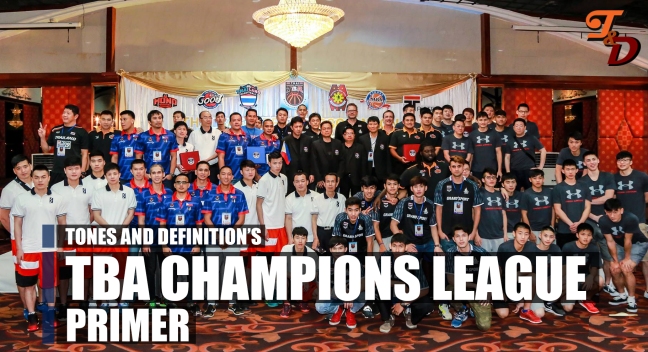 There wasn’t much time to put this primer out as the final roster was sent out one day before the opening date, but I’ll do the best I can. As always.

While the “Thailand Basketball Association” is still a mystery, I expect/hope that we’ll get to know more about this organization as the pocket tournament goes on.

Let’s talk about the actual basketball that will be going on though.

Here are the teams that will be playing through this 6-day stretch:

You can totally read a brief intro to the tournament HERE as well, just for your information.

The teams will be facing each other in a single-round robin format with placement games for first to fourth place on the final day.

That pretty much covers the basics things you need to know.

Let’s get to know the contenders!

The Philippines National Police basketball team are the recent champions of the UNTV Cup, which is a charity basketball league in the Philippines. The level of competition is questionable but there are still some former early ABL ASEAN Imports like Chester Tolomia and Warran Ybanez.

…andddddd that’s all I have on the Philippines National Police.

This team was the host of the Invitational that the Philippines National Police and Hitech participated in late last year.

OOH! They are really tall and will probably be the tallest team in the tournament.

…I feel like I am failing so hard at this preview.

As far as I know (and so far, that’s not a lot), Basket Good is a Youth Basketball Club in Korea. That’s literally all I can decipher from this Korean Blog.

I tried again to be able to give the readers some more depth and I failed.

This is getting really depressing.

Guys. GUYS. I can actually tell you something about this team that might actually be useful!
This is the only international team that will be featuring imports: Anthony Mayo and Cregg Friday.

Mayo is a burly forward who averaged about 2.1 points and 2.1 rebounds at Stony Brook in the NCAA Division 1. Most recently in whatever league Triotek plays in, Mayo averaged 28.7 points, 14.3 rebounds, and 3.3 blocks. He will certainly be Triotek’s main force.

The other “import” is Cregg Friday, who is Vincentian (yes, that apparently that is how you call a native of Saint Vincent and the Granadines). He moved to Taiwan on a basketball scholarship back back in 2009 and apparently has been there since. Friday isn’t the dominant scoring force that Mayo is with only 9.3 points to show for his offense, but his frame will get him rebounds and blocks.

Aside from the imports, it seems that Triotek relies a lot on the scoring of Li Cheng-Han who averaged 20.7 points for his team.

However, the most interesting name on this Jonah Morrison. The 16 (!!!) year old Morrison is considered one of the top young prospects in Taiwan being the youngest player on the nation’s U17 team that participated in FIBA World U17 Championship. He averaged 4.4 points and 2.7 rebounds in 16.0 minutes.

I’m not expecting Morrison to be a monster (he’s still only 16), but I hope that we will be getting glimpses of an exceptional talent of the future.

I feel so much more useful now.

It’s your back-to-back TBL Champions and TBSL Champions! Except it isn’t! But it totally is!

This team is going to be fun to watch to see how Marty mixes it up on the fly, combining veterans with springy young players.

I just remember why this “scheme” sounded familar.

This past weekend, the Philippines National Team Pool went through a weekend of playing against different All-star teams of the PBA. In a way, this was pretty much the same thing: cloaking the National Team under an “All-Star” name.

All 14 players listed here are on the National Team pool, so the fact that Coach Tim Lewis is throwing these players in a tune-up tournament together means that you will most likely be seeing what the National Team in the SEABA Championship will look like. Check out for which line ups play with each other the longest and you’ll be able to deduct the Final 12.

Interestingly, both “Arm” Nattakarn Meungboon or “Ohm” Chanatip Jakkrawan are nowhere to be seen on both Thai team rosters which could mean anything ranging from Coach Lewis considering them shoo-ins and saving them to injuries keeping them out of the tournament.

If this does turn out to be the National Team, we’ll have a lot more time to break it down later.

That’s all I know that you need to know heading into this TBA Champions League!