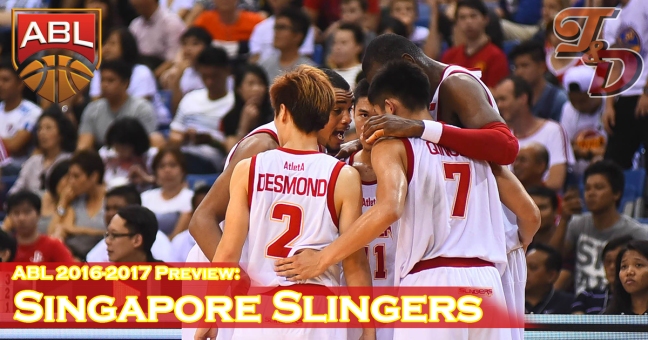 It must have been a long offseason for the Singapore Slingers. Having come so close to the ultimate goal and missing out ever so slightly must have kindled a fire inside them waiting to burst out once the new season starts. And here we are.

The ASEAN Basketball League starts in a few days, so I think that it’s time that we started discussing in details about all of the teams now that each team has started filling in their Imports quotas.

The league will consist of six teams from 6 countries this year (Hong Kong, Taiwan, Malaysia, Singapore, Vietnam, and the Philippines). Each team will play each other 4 times to make a 20 game season. The top 4 teams advance to the Playoffs where they will play best out of 3 series to determine the champion.

Two slots in the roster can be used on “World Imports”. World Imports can basically be any player from anywhere in the world. Teams usually use this quota on American Imports who play close to the basket.

For example, the Singapore Slingers (the team that resides in Singapore) could have signed me (a Full Thai citizen) to play on their team as a Heritage Import. However, they decided to sign All Austria, a Filipino-American whose Mother is fully Filipino. Take note that the league now has Hong Kong and Taiwan in the league, which means team can sign players of Hong Kongese or Taiwanese heritage as well. This means that an ABL team can indeed sign Jeremy Lin (who has Taiwanese heritage) to play for them … if they can convince him to do so.

After missing out on the ASEAN Basketball League title by thisclose, let’s take a peek at how the Singapore Slingers are projected this season!

The Slingers had as memorable season as the Westports Malaysia Dragons had last season, except for getting that final victory. Justin Howard played a full season for the first time in the ABL and notched a single game scoring record in the process (45 points). The Slingers racked up the second longest winning streak in ABL history (10 wins) lifted by the unexpected surge of Wu Qingde. The forward went 3/15 from beyond the three point line in his first two seasons before exploding for 42/115 last year. He was one of the few locals to average double digit points.

Despite early concerns about how they would struggle without much size they made it work playing small ball with with Xavier Alexander as point forward. Delvin Goh held his ground when they needed to go big. The three guard rotation of Desmond Oh, Wong Wei Long, and Heritage Import Kris Rosales was a perfect blend of offense and defense.

They finished the regular season with 16 wins, survived a scare of an upset from Hitech Bangkok City, but sadly ended the journey as runner up. There’s no shame in that, considering how they played and how closely contested it was, and it should only light the fire in the hearts of the Slingers this season.

I don’t know how they did it, but the Slingers managed to get even smaller than they were last season.

Actually, I do know how they did it. Despite being on the opening night roster, promising local big men Delvin Goh and Russel Low are highly expected to miss the entire season for the team. Low missed last season with commitments to his studies and it looked like he might be playing this season when he played all games in the Merlion Cup. However, it was reported again that Low is still not expected to be playing once again this season. Goh has commitments to the Singaporean National Services and will have to take the year off.

The only truly big body for the Slingers this season will once again be Justin Howard, who returns to the team along with Xavier Alexander. This is the first time that the Slingers have returned both imports from the prior season to start a season which says a lot about how well the chemistry was for the team last year.

The lone import that isn’t returning is Kris Rosales, but that didn’t mean he wouldn’t leave a present for the team. With Rosales’ recommendation, the Slingers signed Filpino-American Alli Austria. While Austria might not have caught much attention last season playing for the MX3 Kings, the Slingers coaching staff has high hopes for the guard.

Losing Low and Goh was tough, but at least the Slingers will be celebrating the return of Larry Liew and Mitchell Folkoff. Both were not on the roster last season, but have played for the team in prior seasons. Liew returns after a year of National Service and hopefully, he will build on to his underrated rookie season 2 years ago when he averaged 7 points per game and shot 32.8% from three. Folkoff played his lone season 3 years ago and will provide some size at the forward position this season. Ng Han Bin should be in better shape this season, but he will be fighting heavily for minutes along with high-flying Kelvin Lim.

Wong Wei Long and Wu Qingde are expected to sustain their production with a boost from 20-year-old Leon Kwek. The youngster flashed potential in his first season last year, and now that he’s gotten a chance to shake off his jitters, he could be in line for a breakout year.

Desmond Oh has already played 128 games in the ABL (most ever by any players) and his on the court production should dip again this year as the Slingers allow the new generation to blend in.

The Slingers have only two players who has never played in the ABL for their team. Coach Neo Ban Siang can easily start games early in the season with 5 guys who are used to playing with each other (Howard, Alexander, Qingde, Wei Long, Oh) before slowly integrating projected contributors like Austria and Liew.

It’s going to be a huge advantage for them in the first half of the season while they run plays etched in their muscle memories as other teams scramble to find their rhythm.

Getting down and Dirty

It takes nit and grit to succeed when you opt to play with one less import like how the Slingers have done for the pass two seasons. Nitty and gritty they have been indeed. Last year’s version of the Slinger’s weren’t afraid of getting physical and it shows up in the numbers as well. Not only did they commit the second most fouls (19.5 per game) they were also the teams most fouled on as well (19.9 per game). Alexander led the league in free throw attempts (7.3 per game) by bulldozing his way to the basket and Justin Howard was a foul magnet whenever he got the ball near the basket (6.3 per game, 6th).

It will be pretty much the same squad back this year, so I really don’t think we should be expecting much change in this area.

Despite whatever your girlfriend says, size really does matter.

The Slingers had a great season last year but they had only 2 true big men (Howard and Goh) and it showed in some stretches. No one could beat the Slingers if Howard kept his foul count below 4. The game plan for Hitech Bangkok City and the KL Dragons (the only two teams to beat the Slingers) was simple: Get Justin Howard out of the game. Once Howard was out of the game, it was either you get someone to outwork Delvin Goh or you find a taller guy to attack Alexander.

Now imagine the Slingers not having Delvin Goh, which is the case this year. What happens when Justin Howard gets into foul trouble?

Seriously. My only concern for the Slingers is how small they are going to be.

Alli Austria seems like a logical choice, but that’s too easy.

No, I like to make bold statements. Expect Larry Liew to make a burst similar to Wu Qingde last season because people forgot that Liew was the Qingde before Qingde was Qingde.

If you actually told me that Larry Liew warged into Wu Qingde’s body for the entirety of last season, I would actually have to try to convince myself that it wasn’t scientifically possible.

I like to read some of my past writeups because they amuse me at how little I knew at the time. One of my most favorite stupid statements in retrospect is:

Last year’s 12 win season was impressive but last year’s squad was pretty special. I don’t expect this year’s squad to be able to replicate their success with too many new pieces to set in place. 6-8 wins should be accurate.

In my defense, that 12-win season in 2014 really was special. But the 16-win season in 2015 was merely just special-er. I don’t think many people knew that Alexander and Rosales would be that good of a fit. I think even less people expected that Qingde would be that good either. They had 4 new rookies and 2 new imports. Forgive me for being so wrong.

This year’s team has fewer x-factors involved. Nothing is entirely predictable in basketball, but I think there is more certainty this season. Sure, Leon Kwek or Kelvin Lim or Tay Ding Loon could be unpredictably better than what we’ve seen in the past … but the odds are low.

The Slingers are going to struggle containing big teams, but they’ll win plenty of games against the new teams early in the season to stay in the top half. I’m giving them a decent 11-win season, but they could bow early in the playoffs.