Hitech set out to travel to Fujian, China on October 21 to represent Thailand in the 9th Zheng Chenggong International Men’s Basketball Tournament which will be held from 23-27 October.

The Zheng Chenggong Cup is an international tournament held by the Fujian Nan’An Basketnall Association in China. This year the tournament features a total of 8 teams as follows:

…for those of us less fluent in Chinese:

With their withdrawal out of the ASEAN Basketball League and the rumored extended conference of the Thailand Basketball League yet to kick off, Hitech needed some sort of competition to keep their players fresh.

This Cup was exactly what they needed to test out some new things. Here’s the roster

With Tyler Lamb and Freddie Goldstein headed to their other respective clubs in the ABL season, Hitech will have regroup and find an alternate identity after relying so heavily on the two Thai-Americans during the ABL and TBL. It also seems like Hitech will be trying Coach Sopon in leading the senior team after his success with the youth level.

Piroon has mentioned that this team’s purpose is to develop their younger players like U18 National Team player, Attaphong Leelapipatkul, and recent FIBA Asia Challenege National team standout, Patipan Klahan.

This tournament should be the start of the new generation of Hitech Basketball and should give us a hint of their direction going forward.

One notable omissions to this squad is obviously Wuttipong Dasom who has rarely not been on a Hitech roster barring any significant injury, which makes this absence an intriguing move. Other missing names are veterans like Kannawat Lertlaokul and Warawut Wuttikornphan and youngsters stuck in deep rotation like Suppawich Khukhandhin and Anasweeklaewnarong.

Hitech will have a size disadvantages against the favorites of this tournament, but the players should get valuable playing time and experience to prepare them for what ever competition comes up ahead.

I am quite proud about my knowledge on Philippines basketball as a Thai … but I have to admit that I know nothing whatsoever about this team.

Here’s what I could dig up on the web:

… still don’t know what to expect from this team.

It’s not exactly the regular Senior National Team for Malaysia, but there are plenty of familiar faces here.

The biggest star here should be Kwaan Yoong Jing (26 years old) who starred in the SEABA Stankovic Cup early in the summer. There were news that he has been contemplating retirement and his absence from the past two KL Dragons roster seemed to hint towards that, but his inclusion here might be a boost he needs to return.

He is joined by National Team/KL Dragons veteran Chee Li Wei (33 Years Old) who should provide a well needed size presence for this team.

Wong Wee Seng should be the one to provide their punch from outside.

Similar to Hitech, Malaysia Select Team should be using the exposure for their national team pool more than anything else. They could struggle in terms of size and physicality when they play the China and Taiwan teams.

Hey look! A team I recognize that isn’t from Thailand or the Philippines! Kinmen Kaoliang Liquor recently played in the Merlion Cup earlier in September.

Kinmen Kaoliang or KKL didn’t impress that much however, finishing in 5th place in the tournament. KKL has actually finished in the bottom half of the Taiwanese SBL for the entire past decade. Most of the players are back including Lin Wei-Han and Chien Wei-Ju who played well, but the import situation has changed. Marcus Melvin played for KKL in the Merlion Cup, but since he has since signed elsewhere they had to look elsewhere. Eugene Phelps had recently played in the Philippines Basketbsll Association (PBA) in the Governor’s Cup for Phoenix Fuelmasters and he was one of the best out there. Phelps led the conference in points (36.1), rebounds (19.8), free throws made (9.6) and free throw attempts (13.6). Not bad.

Phelps should be considered an upgrade over Marcus Melvin, merely because he plays more physical inside the paint. That should free up more space for shooters like Wei-Han and Wei-Ju.

Merely the addition of Phelps makes this team a favorite to win it all. 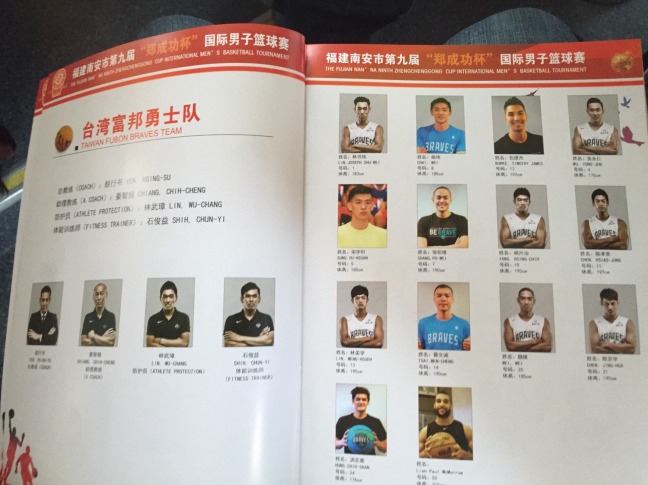 Another Taiwan team! The Fubon Braves have actually been a bit more competitive than KKL in the Taiwan SBL, finishing in second place for the last 4 out of 5 seasons.

Let’s start out with their american import, Liam McMorrow.

These Taiwanese teams seem to have a famliar taste. While KKL’s import, Eugene Phelps, was PBA Phoenix Fuelmaster’s import for the Governor’s Cup in this season, Liam McMorrow was the Fuelmaster’s (then known as Barako Bull) import for the Governor’s Cup in 2014-2015. He averaged 27.1 points and 19.9 rebounds in that conference. McMorrow has also played in the NBA Summer League, NBA DLeague, and the CBA. Most interestingly is that McMorrow had only started playing basketball seriously since 2008.

McMorrow will have plenty of local talent surrounding him, but the more intriguing names are also the league traditional Taiwanese names: TJ Burke and Joseph Lin.

TJ Burke is a Taiwanese-American who was born in Hawaii most known for having played in the NCAA Division 1 for UC Riverside for his first two collegiate season. The timing all coincided with Jeremy Lin’s outburst with the New York Knicks (aka Linsanity). Burke wasn’t the impact player that Lin was at Harvard, and later transferred to Vanguard University in the NAIA. This is going to be Burke’s first professional season playing basketball. Speaking of Jeremy Lin, if you were joking about Joseph Lin being Jeremy Lin’s brother … well, it’s not just a joke. Joseph Lin of the Fubon Braves is Jeremy Lin’s brother. According to this report, Lin was deciding on a career in graphic design and animation or trying out to be a professional gamer, before he was spotted by SBL scouts and recruited to play for the Braves. Lin has done a good job of casting his own shadow by winning the SBL’s Rookie of the Year award, making the All-Star game, and averaging 12 points, 4 rebounds, 4 assists, and 1 steal per game.

Of course, it’s not all about McMorrow, Burke, and Lin. The other Taiwanese players of the Fubon Braves should be able to hold their own … hence why I peg them as the favorites of this tournament.

Tong Whye Physical Association (Singapore), Enerskin (Korea), and Fujian Nan’An (China) probably have their own key players to boast about … but sadly I know nothing on them. You can check out the rosters here and if you happen to know anything about these players and teams please do share: