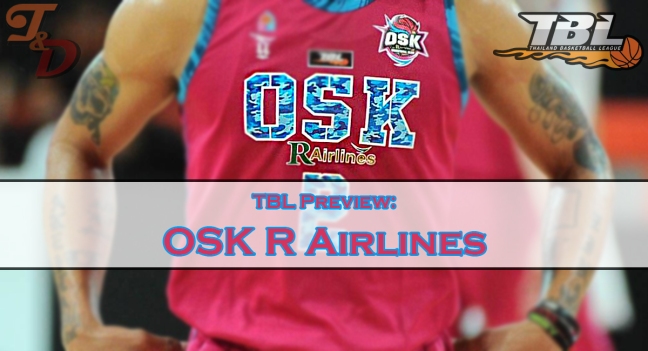 I don’t know how everything went down behind the curtains, but OSK R Airlines seemed to have popped up out of thin air. There was no build up. The OSK school pipeline to professional basketball had been dried up significantly over the years.

And they aren’t here for just the sake of being here. OSK are here to play.

I walked into the gymnasium of the Physical Education department of Srinakarin Wirot University while the sun was starting to set. This is where the OSK basketball Team had been practicing recently. Some of the players were quietly working on their game, mostly the guys who were still in college and studying here at SWU. I saw Coach Prasert Siripojanakul sitting around midcourt and walked over to greet him.

It had been a solid 6 months since I had last saw him when I was following the Mono Vampires team around. Coach Prasert was still head coach of the Vampires at that time, as he had been for the past 2 years. Lookin back, Coach Prasert (or better known as Coach Seng) was in a similar position as he was in right now. He was the Mono Vampries choice as a head coach to lead their newly built team back in 2014 and he led them to a championship 2 seasons later.

Now he is the head coach of OSK R Airlines, another newly built team.

“The owner and board members of the team has set a target for this team to make the playoffs,” Coach Seng says. “I have this team that is built up from younger and older players who might have missed opportunities in the past.”

Right there could have been a quote from back when he had just taken over the Mono Vampires as well. Coach Seng is in familiar territory. As always, the atmosphere around Coach Seng is a feel of optimism. Even though they are a new team, the players are looking forward to the challenge. The younger guys are hungry for their first chance in the big leagues and the veterans on the team can feel that hunger. They feed off each other.

The practice today was pretty simple. Coach Seng ran some fastbreak formations for a short while before pitting the players against in each other in scrimmages. Chemistry is an issue that the team needs to figure out which means that the more they actually get to “play” together, the faster they can grow.

In one particular instance, Avery Scharer (the team’s ASEAN Import) drives towards the basket. He doesn’t get a foul called for him and jogs along side Coach Seng who has the whistle in his mouth. Scharer tries to convince Coach Seng otherwise and Coach Seng jokingly tells him that he’ll call a technical foul on him to talking to much.

“No Coach, I’m calling a technical foul on you!”

The players slow down play briefly just to enjoy a laugh together.

Anucha and Thotsapith Langsui to OSK might very well be one of the biggest offseason moves in the TBL. Big bro Thotsaptih missed out last season to recover from an ACL tear, but he should be coming back into play soon. Anucha himself played sparingly and hurt last year.

However, two years ago, both were the top two leading local scorers for PEA with Thotsapith scoring 10.3 and Anucha going for 9.5 per game. They should be a huge help to the imports, if they can stay healthy.

The more intriguing prospect of the two right now is Anucha, who is not even yet 20 years old but has the height and range combination that has led to this statement by Avery Scharer.

“He’s so young he doesn’t even know how good he is yet,” Scharer raves of Anucha. “If he knew how good he was, he’d be the best player in Thailand. Period.”

Avery Scharer is going to be the heart and soul of this team. That’s just the way he plays.

“I’m going to play every game like my last on both ends,” Scharer says of what he brings to this team. “I know a lot of people who don’t like to play defense, but I think that if you can steal the ball, that’s two points on the other end. [Also,] my ability to make the players around me better. When you play with me, all the sudden you go from averaging 4 points to 10 points. It’s not a coincidence. It’s because I put you in those positions and those spots. They see me working hard and they will want to work as hard as me because I battle for my guys.”

For better or worse, Scharer is going to pretty much dictate the fate of this team.

And he is such an entertaining interview.

Kraiwit Wetwittayakit and Supachai Sangthong both faced similar situations in their respective former clubs. There was not enough space for them to play.

No one denies that they could still play and play well, but sometimes it’s just hard to wiggle into a comfortable rotation.

With this move to OSK, they will be able to prove themselves once again.

Let’s start with this quote from Avery Scharer, because Scharer is just so quotable.

“Honestly, I think we can win the whole thing,” Scharer says. “I went to the [SEABA Stankovic Cup Championship game] and they were telling me that these were the best guys in Thailand. Those weren’t my same sentiments. I felt that 5 or 6 guys here, should have been on that team easily. So I definitely feel that we have a good group and the sky’s the limit.”

Everyone is feeling good about this team.

“I feel like we are a family,” Sriwongkod says. “We might be a new team, but we aren’t turning our backs at each other all the time. We talk to each other and we don’t put on masks to confront one another.”

“My philosophy is to let the players play to their own games,” Coach Seng says. “and we’re going to entertain the crowd.”

This is going to be a fun team to watch. Finally closing out with another Scharer classic.

“Come to all out games to support us,” Scharer shouts out to fans as he closes out my interview with him. “I guarantee you that you’re going to leave happy. We’re here to put on a show. We’re here to please the fans and ultimately, we’re here to win. Get your popcorn ready, get your soda ready, and be ready for a show. Not only will we win, but we’re going to win in style.”