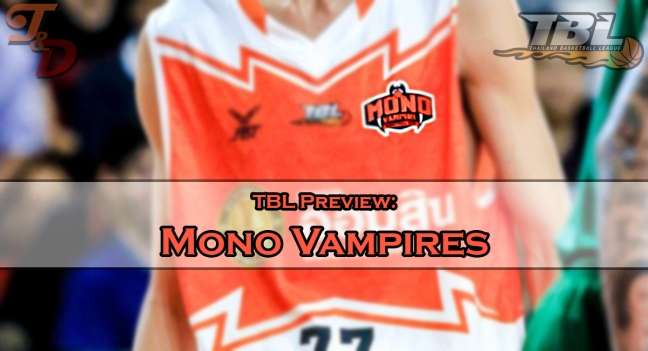 “There’s so much pressure” Chanachon Klahan says. “It was hard enough to win a championship. It’s even harder to defend that title.”

What makes it even harder to defend a throne is going through a series of major changes.

Finally, the snazzy new Stadium29 arena was all theirs. The Mono Vampires had to split time with the Thailand National Team throughout most of the entire past 2 months.

Now, the squeeky clean new court, the facilities, the jumbotron, the bathrooms, the VIP rooms, everything was theirs. It was a complete change from the gym at Prachaniwet that they had used as their home grounds one year ago when they won the Thailand Basketball League title in only their second season of participation.

Things have changed since then.

New Head Coach Jon Corbacio walks into the gym and we exchange our greetings. If you think Coach Jon is young, well…he is. Only at 27 years old, this is his first time as a Head Coach of a professional basketball team.

“I have so much respect for all the coaches I’ve played for in the past,” Coach Jon says. “Knowing everything they had to do on a daily basis besides getting on the floor and practice planning. There’s more to it than just that. Just doing those little things every day gets tedious.”

Coach Jon will be replacing Coach Prasert Siripojanakul, who had coached the Vampires to the championship last TBL season and was released during the ABL season for disclosed reasons. He will be among one of the three foreign head coaches in the TBL this year.

“There are some changes from last year with our new foreigner head coach. He’s put in a new system like morning practices and we’ve been getting to learn new skills” says superstar “Bas” Kannut Samerjai.

Even though the venue has changed, the main core of the local players remain the same. That’s been a big part of why they are still considered one of the best teams in the league.

“I think this team is more like a brotherhood,” Captain “Sing” Chanachon Klahan says. “Whether it is practice or game time, we can always approach each other with suggestions. No one is saying ‘I’m the best’.”

Despite all of the changes surrounding them, the core of this Mono Vampires has remained unshaken.

And they are going to be hungry for another title.

Chitchai Ananti has exploded since last year going from a scorer on Mono-Thewphaingarm to being one of the most explosive scorers on the defending champions. Ananti has played with this Mono Vampires squad before in the ABL, so he’s not exactly a new addition, but he’s never played with this team in this league.

The Mono Vampires have a formidable scoring line up already, but adding in Thailand’s SEABA Stankovic top scorer into the mix (12.2 PPG) should bring their offense to another level. Ananti can be streaky from the three-point line, but he’s shot a decent percentage. He’s also pretty deadly in transition where he can use his length to finish over opponents.

Even in a team that is already filled with superstars, I wouldn’t be surprised if Ananti rises and shines above the rest.

Another transfer from Mono Thewphaingarm and National Team standout, Teerawat “Big” Chantachon will finally be making his debut for the Mono Vampires. Chaiwat Kedum isn’t getting any younger and Chanachon Klahan has become more of a stretch 4 (not to mention injuries). Chantachon is going to be the premier big man for this team and while he still needs to refine his offensive game a bit, his development is going to be fun to watch.

I don’t think it’s too much to expect a championship from the defending champs. They have the same local core which was their strength last year.

“[The Mono Vampires] have a disadvantage of not having an ASEAN Import and we’re not that big,” Darongphan Apiromwilaichai said. “But we have the advantage that this is our homecourt and we’ve been playing with each other for along time.”

Remember that 7 of these players were on the SEABA Stankovic Cup squad which means they have been practicing intensively together at Stadium29 for quite a while. That could actually be a pretty big factor and we’ll see how it affects their shooting percentages.

The import situation looks a bit shaky but if they figure that out, a trip to the Finals to defend their title should be a sure thing.

Someone is going to misunderstand Josh Crawford for Josh Warren. (I know I already did)