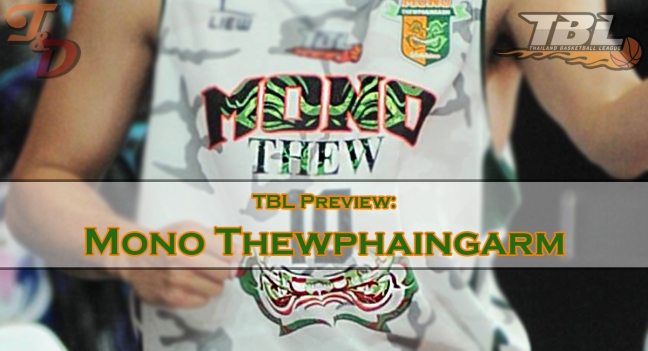 I was sitting out of breath on the side of a football pitch while I watched the Mono Thewphaingarm basketball team go through their fitness/condition/core training. They all took turns joking around at each other (and even directed some at me) as they did each position.

Despite being tired and breathless beyond what I had experienced in a long time, it felt sort of cozy to be there with the Mono Thewphaingarm team in what they like to refer to as a family.

“This team is more like a family for me,” Tawatchai Suktub says of the Mono Thewphaingarm team. “I’ve play for a lot of teams, but this teams feels special. We’re like brothers both on and off the court.”

There’s a certain sense of brotherhood that oozes from this squad. You can see the liveliness of the players on the bench and how they express themselves on the court. It helps that a large part of these guys are alums of the Thewphaingarm High School, but the team has also done a good job of drawing in cheerful personalities like the aforementioned Suktub or Poomin Singhasem. That feeling of togetherness is so strong that they have mentioned it as their advantage coming into the TBL.

“[Our identity is] Teamwork,” Tanakarn Sriboonreung says. “We’ve been practicing for quite a long time and we’re using the same core of players which gives us the advantage over teams that sign a lot of players over the offseason.”

Tanakarn may or may not have been referring to the recent transfers of Chitchai Ananti, Theerawat Chantachon, and Narathip Boonserm to the Mono Vampires. While it is obviously difficult to keep the team going when you are poached of your key players, Coach Joe Sunthornphong Mawinthorn has his ways to keep the Mono Thewphaingarm train going.

“We practice all year round [at Thewphaingarm] so I get to see the development of all the players at an early stage,” Coach Joe says. “I’m able to see who does well in which areas which helps me in selecting who to add to support the team.”

Despite all of the players that Mono Thewphaingarm lost, they were still able to get one guy back and that one guy is someone who Coach Joe has also seen grow up before his very own eyes as well.

“It’s like a home-coming,” Nattakarn Meungboon says of his return to Thewphaingarm. “In the past I’ve played with guys who are like big brothers to me. This time, I’m coming back to Mono Thewphaingarm as a big brother myself.”

The team caught quite a number of people by surprise last year by making it all the way to the TBL Finals by beating Hitech. With the recent changes to the rules, which allows teams that finished lower than 3rd place from last TBL season, Mono Thewphaingarm feels that they are even a much bigger underdog than they were last year.

They will need to be strong as a team or as a family to bring out the best in what each player has to overcome the odds this season.

But they overcame the odds last year, why not do it again this year?

“Jeng” Tawatchai Suktub has always been a player that is unfairly overlooked. He was one of the most effective scorers in the TBL two years ago when he was still with the Madgoats, yet when you mention that Championship Madgoats squad, he would mostly like be only the 4th or 5th name that pops up.

Let’s hope this year, Jeng can finally get the spotlight to shine his way. And that might very well be happening. Coach Joe himself had named Jeng to be one guy who could potentially have a meteoric rise like Chitchai Ananti from last year.

I’ve always been on his bandwagon and you’re welcome to hop along now while there’s still room left.

“Arm” Nattakarn Meungboon comes into this squad bringing in the star power that they so very desperately needed after losing out their two National Team Players in the offseason. While Arm didn’t make the SEABA Stankovic Cup National Team, he certainly has the talent to have made the squad.

Arm might not be a flashy scorer, but his well rounded game of 4.6 points, 2.4 rebounds, and 2.0 assists from last year should expand even more in his bigger role here at Mono Thewphaingarm.

Now he will be reunited with Coach Joe, who he has always seemed to strive under.

The odds are firmly against them. They don’t have any recent National Team players (like Mono Vampires stacked up) nor do they have any half-thai stars (like Hitech has) and they won’t get to have an ASEAN Import (like the remaining 5 teams will have). But the talent that they do have on hand is pretty solid.

They will have to fight out for a playoff spot, but trust me that they will be in that race when we approach the final stretch of the season.

And once they make the playoffs…we’ll we’ve seen what they are capable of.

Tanakarn Sriboonreung wearing the best shoes of any player during the entire season at some point.

Mono Thewphaingarm getting a load of players from another team.