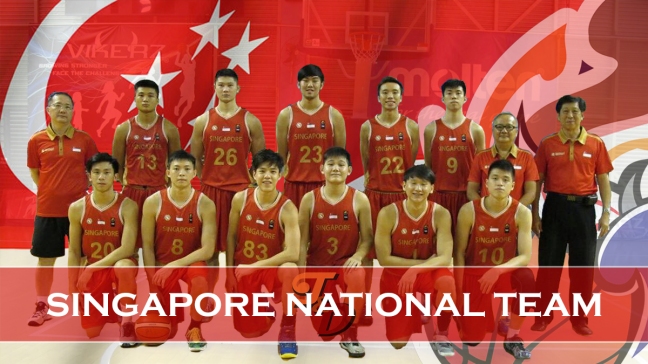 I had high hopes for Singapore. Like Indonesia, they were running off high fumes from the SEA Games and the ASEAN Basketball League where their performance reached unprecedented heights. A bronze in SEA Games and a trip to the ABL Finals had us looking forward to what more this particular core of Singaporean players could bring.

Whatever it is, we weren’t going to see it here.

Singapore had hustled and played solid fundamental basketball with a core of Russell Low, Larry Liew, Ng Han Bin, Wong Wei Long, Desmond Oh, and Delvin Goh (who all played more than 20 mins/game in SEA Games). This is more or less the same squad that won a championship in the 4th SEABA Stankovic Cup, which was held in Singapore.

I didn’t expect all of them to return because Larry Liew (National Services) and Russel Low (exams) had already missed the ABL. Still, I had not really expected that the only one from that core returning would be Delvin Goh.

We (or at least I) might be seeing a whole different Singapore National Team in this tournament.

Let’s break the team down:

Soooooooooooooooooo yeah, after 12 years, Coach Neo Ban Siang has decided to step down from the helm of the Singapore National Team which left the position vacant for the SEABA Stankovic Cup.

Singapore then sought out for someone familiar with the scene and got Frank Arsego, who had coached the Singapore Slingers in the first ABL season. However, Coach Frank didn’t really have much time to be with the team (arriving in Singapore in Mid-May), he has decided to take a step back in this tournament and study from the stands.

The interim coach will be Coach Neo Nam Kheng. All I know is that New Coach Neo has had experience with the Singapore U18 National Team, so his familiarity with this younger core of players should be useful.

So, as we mentioned. Only Delvin Goh returns from that “Core”. However, we still have plenty of players returning from the SEA Games squad and the ABL Slinger squad. From the ABL and SEA Games are Chin Hong, Kelvin Lim, John Ng, Delvin Goh, Qin Huang, and Leon Kwek. Only Shengyu Lim was from last SEA Games (and from plenty of other prior international events).

The core three who I expect to breakout is Delvin Goh, Leon Kwek, and Qin Huang Toh. Goh has seemingly always been on the verge of a breakout but this might finally be the perfect time. He no longer has Wei Long or Desmond Oh or anyone else. This should be his team. After playing solidly against and aside imports in the ABL (good for 3.2 points and 3.9 rebounds), Delvin Goh should hold his own against other big men in the competition. He seems to have really improved his footwork and his shot-blocking instincts have slowly caught up to his size Look for bigger numbers than his already impressive 10 points and 5.7 rebounds from SEA Games.

Leon Kwek looked also on the verge of a breakout, starting his very first ABL season scoring plenty of points. His minutes got toned down towards the end, but I feel like he got the experience he needed. He might have ended up with only 3.7 points per game in the stats sheet, but he displayed a solid set shot from the baseline and athleticism to finish in transition. Now if only he could stop fouling so much…

Some people might question why I am so high on Qin Huang. Leon Kwek and Delvin Goh were reasonable choices to breakout here. Why would a guy who played the least minutes in the last SEA Games suddenly break out? Well, there’s no Wei Long anymore. No Desmond Oh anymore. No Larry Liew. SOMEONE has got to pick up the pieces in the back court. Of all the returning players, only Qin Huang can play the point guard position. While his ABL numbers don’t stand out (1.4 points, 38.5% 3P), his play in the very few limited minutes wasn’t bad. He played solid defense (albeit in garbage time) and made three point shots that were given to him.

Not going to go into much depth about Kelvin Lim and John Ng because they rarely got to play in the ABL or in SEA Games/SEABA Championship. We’ll learn quite some more from the two in this tournament here.

Of the remaining players in the roster, 25-year-old Shengyu Lim poses as someone who might make some noise. Lim was a part of the Singapore Slingers a couple of seasons back and had also won the first ever three-point shoot-out as well. While he’s been absent from the Slinger’s roster the past two season, he’s been doing some work in the Pro-Am Singapore Basketball League for a team dully named “SG Basketball”. In a league where 9 of the top 10 leading scorers are American or Filipino, you have Shengyu Lim sitting quite pretty at No.8 with 21.7 points per game, dropping threes at a 38.2% clip. Say what you want about the level competition in the ProAm SBL, but that stat line is pretty impressive. For a team that is looking to rebuild offensive options, returning to a veteran like Shengyu Lim might not be a bad idea.

I blasted Indonesia pretty hard for not sending their top players and you might be wondering why I have taken a different approach with Singapore whose top players are not playing. In Singapore’s case, it’s not a problem of conflict in scheduling; it’s the fact that maybe those core players just need a frickin’ break.

Since the SEABA Championship in 2015, I don’t think they have had a break at all. Almost instantly after the SEABA Championship was the SEA games and both were held in Singapore. The gap between SEA Games and the ABL wasn’t much of a big one and the same guys were playing and practicing night in and night out. Maybe it was time for those guys to take a rest and see what the next generation can do.

What Singapore has shown (or at least their core players of the past) is that they will always play stingy defense. The likes of Goh, Qin Huang, Kwek, and others should all be the same because they have always practiced under the same system.

This tournament here should be a nice indicator of whether the Singapore basketball development system is the real deal or maybe they just struck at the right time with that generation of players.

I’m willing to bank on the former.

In the middle of the first quarter, Delvin Goh gets the ball in the post. He’s going up against Sukdave Ghogar of Thailand. The two have crossed path so many times, they are probably bored of each other by now. Ghogar has always seemed to have the upper hand in these match ups, and rightfully so. The Thai has displayed better footwork and has a stronger physique from being 3-4 years older.

Not this time. Goh backs down Ghogar with one power dribble and then fakes a drive to the right. Ghogar goes for it, but doesn’t commit completely. Goh turns around and pulls up for a shot.

Ghogar smirks a little as he’s seen moves like this before. He thrusts himself forward into the air to contend the shot.

But Goh doesn’t raise from the floor! He pump fakes Ghogar into the air and pivots closer to the basket for the easy layup.

Goh would continue his dominance down in the post and that would propel Singapore to the victory over Thailand. He would finally solidfy himself as one of the best ASEAN inside players outside the Philippines. He would solidify the fact the the torch of Singapore basketball can be trusted with his generation. The win would help Singapore get into the final top two positions and a spot in FIBA Asia Challenge.

In the middle of the first quarter, Delvin Goh gets the ball in the post. He’s going up against Sukdave Ghogar of Thailand. The two have crossed path so many times, they are probably bored of each other by now. Ghogar has always seemed to have the upper hand in these match ups, and rightfully so. The Thai has displayed better footwork and has a stronger physique from being 3-4 years older.

Not this time. Goh backs down Ghogar with one power dribble and then fakes a drive to the right. Ghogar goes for it, but doesn’t commit completely. Goh turns around and pulls up for a shot.

Goh raises up for the turn around jumper, but Ghogar has seen this and he thrusts up and blocks Goh’s shot completely.

It would be that way for most of the game. Goh struggles to operate against Ghogar and without his inside dominance, Singapore are unable to keep the Thai perimeter players from spreading out to cover their shooters.

Singapore would lose the game and miss out a spot in FIBA Asia Challenge. While the young Singaporean team displayed good progress, it seems like they are not ready to shoulder a team without their veteran seniors.

Check out the other team previews here: