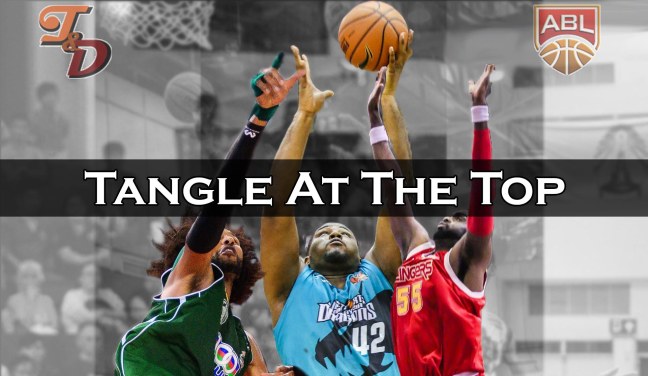 If you were wondering how the ABL standings might end up, I’ve summarized it here.

ABL Season 6 isn’t going to get quite a dramatic regular season finish like Season 5. It was only until the last few games that the Saigon Heat were able to clinch their first playoff appearance ever by going beating the Indonesia Warriors (who would sadly end up in 5th place) in an overtime game.

I remember watching the live feed of the game and going through all the emotions that came with it.

We’re not going to particularly go through the same situation this year. The Saigon Heat have already punched their ticket into the playoffs, no matter what happens in their final two games. They won’t be able to move up further the number 4 seed either. For them, the drama is over early.

The rest of the table, however, is a screwed up mess.

The KL Dragons recently moved up to 1st place in the standings after an impressive victory over the Singapore Slingers this past Sunday. The Slingers and the Dragons have an identical 14-4 record right now and they split the season series 2-2, but the Dragons get the tie-breaking edge here by outscoring the Slingers in their confrontations +4 points.

Hitech Bangkok City sits quietly at 3rd with a 13-5 record.

The race for the No.1 seed and outright homecourt advantage throughout the entire playoffs is still pretty much wide open.

As you might have noticed, each team has finished a total of 18 games. I use the term “finishing a game” because while Hitech Bangkok City only have 18 completed game, they only have to finish the remaining 39 seconds allowed to be replayed for their game against the Mono Vampires.

Let’s take a look at each team’s reminding game:

Only one of those matchups are between the two top 3 teams, so that game on Wednesday (17/2/2016) will play a huge part into what could happen next for each team.

Which raises the question: what could happen in this final stretch?

I ran a spreadsheet to simulate every possible scenario which could effect the final standings and it resulted in 25 possible variations. If we consider that each team has a 50% chance to win each game, we got the following odds for all 25 possibilities:

For those who are quick enough to notice, there is an 8% chunk missing. This 8% is the total of the 2 scenarios where teams end up in three-way ties. I’m not sure how the ASEAN Basketball League sorts out three-way ties and I’m more than eager to witness that, but I think the possibility of that happening is quite low.

Let’s take a look at the situation for each team.

Starting off with the team that is most likely to end up in first place, the KL Dragons have peaked at the right moment of the season. Two straight victories over Hitech and Singapore over the past week have put the KL Dragons here.

And they can easily finish off the season in the same spot as well. All they need to do is win the two remaining games.

The game against the Pilipinas MX3 Kings shouldn’t be much of a worry, as the Dragons will be playing at home in the season closer against a Kings team that will probably just want to get this ABL season over with to prepare for next year.

The game against Hitech Bangkok City, however, might be a bit of a problem. Hitech at 100% is capable of taking down the KL Dragons so that’s something to watch out for. But then again, Hitech are probably going rest Tyler Lamb (hamstring) and maybe even Chris Charles (ankle) as well. And they might not even want to win this game (more on that when talk about Hitech).

If Hitech do beat the KL Dragons this Wednesday, look for an interesting situation on Sunday’s game between the Singapore Slingers and the Saigon Heat because…

Unlike the Dragons, the Slingers aren’t the sole controller of their fate in the playoff seedings. If they want to clinch that No.1 seed, not only do they have to win their two remaining games, they have to hope that the Dragons slip on one of their own games.

The Slingers shouldn’t have a hard time doing their job. They play the Mono Vampires on Friday, whom they just recently beat down without mercy a little bit over one week ago.

What’s interesting will be their second game against the Saigon Heat on Sunday. That will be the last game of the regular season for the entire ABL, meaning that the Saigon Heat could possibly be able to determine who they want to play in the semi-finals.
If the Dragon’s lose one of their two finals games, the Heat could choose to intentionally lose to the Slingers on Sunday. This would set them up with a semi-finals series against the KL Dragons, if they feel that is a better match-up.

The Slingers have as much a chance to end up with the first seed than the second seed (40.0%) so it’s pretty clear what their intentions are going to be.

Win both games and let the rest of the pieces fall into place.

They started out the season with a 7 game winning streak, but it’s been quite a roller coaster for Hitech since then. After looking like a lock for the first seed, they are suddenly looking on the wrong side of getting home-court advantage in the playoffs.

Going by pure probability, Hitech has the lowest chance of getting the top seed at only 12.0%. In reality, it should be significantly harder than that. Hitech will need to beat the Dragons this Wednesday and hold off the Mono Vampires in the remaining 39 seconds this Friday. And that’s the easy part. Aside from winning both of their games, Hitech will also have to hope that Singapore Slingers lose both of their games as well. Singapore has lost only 4 games this season and none of those loses were at the hands of the teams they will be playing this coming weekend. Hitech’s chances at a second seed are ridiculously slim.

It gets a little bit more interesting when we look at the chances of Hitech finishing at the second seed because it involves with who they will be playing in the semi-finals. There are six scenarios where Hitech Bangkok City ends up with the second seed. Five of those end up matching up with the KL Dragons. The only scenario where Hitech plays Singapore as the second seed is if Singapore is unable to collect a single win in the last two games. I find that highly unlikely.

Finally, we look at the position where Hitech is most likely to end up. There is a 60.0% chance that Hitech end up in third place where they will end up not having home court advantage. Hitech probably wouldn’t really care that much as they have suffered two of their biggest loses this season at home.

This is where Hitech’s game against the KL Dragons gets interesting. If Hitech decides that they would rather play Singapore in the semis, they could intentionally lose against the Dragons and hope the Dragons don’t screw up against the Pilipinas MX3 Kings on Sunday.

And that’s how you set up a semi-finals series against the Slingers!

Late update: I just got official confirmation that in the case of a three way tie, the teams will be arranged according to points differential in games against the other two tied teams.

As of right now, the KL Dragons lead with a +16 advantage, followed by the Slingers at +10. Hitech is stuck at the bottom with -26.

A three way is unlikely to happen, but if it should now you know it the tie will be broken.

So that’s a wrap up of how the last few days of the ABL regular season will unfold.

Here’s to hoping we’ll get one hell of a crazy ending heading into the playoffs.