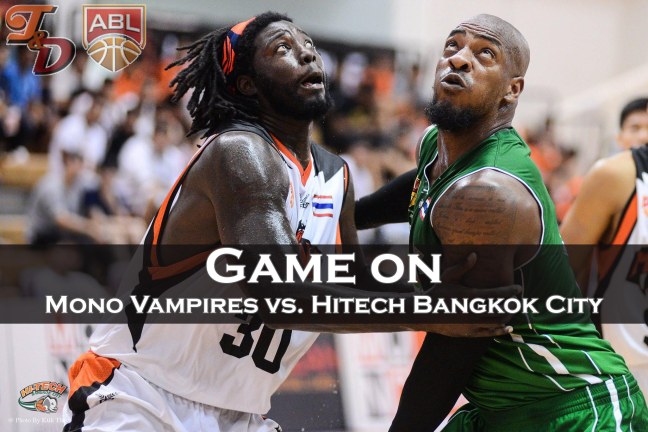 It’s been fun with the Bangkok Brawl and we’ve finally made our way to the final episode (of the regular season).

Barring a frantic run by the Mono Vampires in their remaining 6 games and a meltdown by the Saigon Heat, this could very well be the last time that these two Thailand based team play against each other in the ASEAN Basketball League.

Let’s enjoy it while it lasts.

It’s been a bit lopsided in the win/loss column with Hitech dominating the series 3-0. The Vampires have tried to make it close in each game, but they’ve never been able to seal the deal and get the “W”.

The Vampires have just been unable to keep up with the sheer athleticism advantage that Hitech has on them.

Freddie Goldstein took control of the 4th quarter in the first match up and ended with 21 points, 7 assists.
Tyler Lamb shot the lights out in the second game, going for 26 points of 60% shooting.
Chris Charles led the way in the third game with 20 points and 18 rebounds.

But now, Mono have their last shot at Hitech. They want to make this one count.

In the third game, the Vampires had recently added Mike Fey. While he had a decent game scoring (20 points), he didn’t help much on defense, especially in transition.

In this game, the Vampires will have recently added Leo Avenido. Avenido came off the bench in his debut to rack up 16 points, 5 rebounds, and 5 assists against the KL Dragons. Not bad.
However, Avenido hasn’t had such a good time playing against Hitech. Since last year, Avenido has scored only 9.25 points on 31.7% shooting against the Thai team, in their 4 matches while he was with the Saigon Heat. Those are personal lows against any team for Avenido dating back to last season.

He has made the Mono Vampires offense more versatile and the veteranship is well needed, but he’s going to need to be on his A-Game against Hitech to give them a good chance.

Both teams are coming off games against the KL Dragons, but both with different results. The Mono Vampires were ran off their court by the Dragons, while Hitech went to MABA Stadium and grinded out a victory.

Hitech should be oozing with confidence after that game. Their emotional and vocal leader Steve Thomas played one of the best games he has played all season. But even then, there are issues to worry for Hitech.

Chris Charles is coming off a very bad shooting game. He took a total of 28 shots and made only 6 of them, which would be his worst shooting game since going 2/11 against the Dragons last year. One can hope it was an off game, but Chris Charles doesn’t seem like his usual MVP-form self. Hitech fans are certainly hoping he can snap out of it and maybe a game against the Mono Vampires might be able to snap him out of it.

Second issue is that this will be Hitech’s 5th game in 14 days and 4th in 10 days, which is the most amount of games any team has played in this span. It might not seem like a lot if you compare it to NBA schedules, but you have to remind yourself that this is not the type of schedule that these players are used to. And they are travelling between countries. That fatigue is probably going to effect this game, either by a little or a lot. Whether it will be enough to turn this game around is another story.

Mono Vampires need this win badly. It’s probably their best shot at winning against a Top 3 team because of all the emotions that will be involved, so they had better make sure to capitalize. Hitech will also want to finish this rough patch of the schedule with a 3-2 record, before their long needed rest.

One thing we know for sure: No one is going to back down easily.

Ps. Mono Vampires will be moving their home venue to Sriprathum University. I don’t know how that will effect with their familiarity with the Home Court and their Home Court advantage…but I feel like there’s a possibility that it could be in play as well.

Captiain “Boy” Piyapong Piroon is not getting any younger and the young guns of Hitech keep getting better. He’s been taking up the a lot of the responsibilities of General Management for the team (and even going through Sports Management costs). It’s very possible that this season might very well be Piyapong’s Swan Song.

Not to say that he can’t play or has announced a desire to retire, but there’s always a possibility. And with all of the emotions flying which better stage to step up and perform other than the game against rivals, Mono Vampires?

He’s already delivered one classic three point barrage before half-time in game 2. Maybe he has one more of that sort of game left.

It’s been 3 games in the series and all we’ve seen is Hitech figuring out Mono Vampire more and more each time. The Vampires ran into trouble in transition defense last time and I doubt that the addition of Leo Avenido will have magically fixed that. They might have added “Pae” Chitchai Ananti to their lineup. While he’s had a good time playing against Hitech in the Local leagues, he’s yet to prove himself internationally.

Until he does, I still have Hitech taking the sweep in this series. They should beat the Vampires by 10 points.

Feature Picture from Onvisa Thewphaingarm
You can follow Tones & Definition at the following media outlets as well:
BLOG: tonesanddefinition.wordpress.com
Facebook: www.facebook.com/tonesanddefinition
Twitter: @tonesndef
Line: @tonesndef (the “@” is a part of the ID)