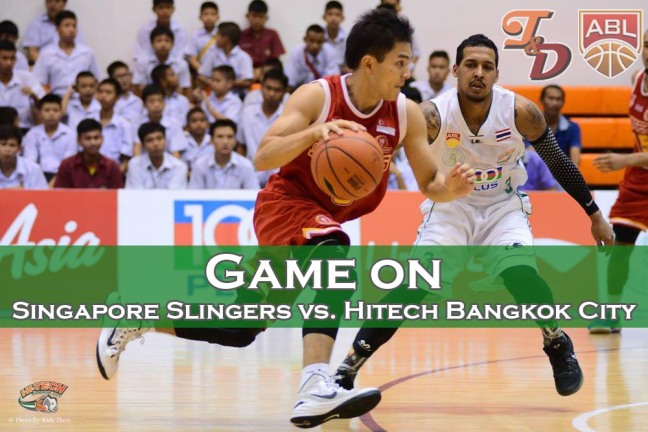 It’s a crucial battle for the top spot in the ABL! But it might not live up to the hype…

The Slingers just recently escaped an upset at the hands of the lowly Pilipinas MX3 Kings, while Hitech Bangkok City saw their 23 points lead evaporate within a few minutes in the fourth quarter before slightly edging away. Needless to say that both teams did well to show the composure of a title contender to finish the game with a win, but the fact that the games were so close to begin with might be a concerning.

Unlike the other matchups in the ABL, a game between the Singapore Slingers and Hitech is a game played between players who have quite a lot of experience playing against each other. Chris Charles, Steve Thomas, Justin Howard, and the majority of the locals have been going at each other s necks for quite a while. Even though the rivalry has been quite friendly, it’s also never been at the point where both team have really been at the pinnacle of the league at the same time either. I’m not excluding the KL Dragons, who have been on a tear recently, but you have to admit that the Slingers and Hitech have looked more “well rounded”.

This is the time.

And what timing it is that Singapore Local star and ASEAN MVP, Wong Wei Long, will be back from suspension since that game against the KL Dragons before the New Years break.

Wei Long had been averaging 10.4 points per game before the suspension and was the Slingers main offensive weapon from the perimeter. His absence left some worry for the Slingers offensive firepower and if it would leave some room for the Mono Vampires or Pilipinas MX3 Kings to spring an upset. Even though both teams came close, the Slingers were saved by the day from an unexpected hero.

Wu Qingde came to life and scored a combined 33 points in 2 games. He also his 8 three pointers in total. For reference of how unexpected Qingde’s shooting performance was, he attempted 12 three point shots during the entire ABL season 5 while making only 2. He surpassed those numbers in his career game in against the Pilipinas Kings alone. Qingde was known for being a scrappy offensive rebounder last year and he has expanded his role to be a “3 and D” this year out of nowhere.

While Singapore will be enjoying the return and a emergence of local stars, Hitech will be absent of some. Because it is the season of the University Games in Thailand, some of the more younger players have been attending the services of their schools. Hitech will be taking a huge hit with the absence of Wuttipong Dasom, Nakorn Jaisanook, and Bandit Lakhan who will be playing for contenders Dhurakit Pundit University.

Needless to say that this is going to be a big blow. If Hitech didn’t already have the disadvantage of playing away from home at OCBC Arena (where they have always seemed to struggle), they now have an even bigger obstacle to overcome.

Especially with the absence of both Dasom and Jaisnook who have plugged in very well in the perimeter spot beside Lamb and Goldstein. Dasom has been a terror on the break and Jaisanook has had his moments shooting the ball. Nothing to take away from Piyapong Piroon (who has been doing an okay job shooting himself) and Attaporn Lertmalaiporn, but that is a big hole to cover up.

This is where the hyped matchup might take a bit of a hit.

Now this is where it gets interesting. Hitech had to find someone to fill in the void at the small forward position. Who else to bring up than a young gun who has been playing really well (2nd team All-TBL via Tones & Definition), Patipan Klahan?
Klahan is a tall and long forward who has a sweet shooting touch (39% from three point range). He might still make some youngster mistakes (he’s only 21, cut him some slack), but this is a great oppotunity for him to get his feet wet.

Good to see Hitech finally bringing him up into the mix to prepare for the transition from the Piyapong Piroon/Attaporn Lertmalaiporn phase. I’m a bit surprised that he wasn’t selected since the start of the season, but better late than never.

Let’s be real and cut to the chase. The Slingers have not lost a single game at home even if teams have given them scare after scare. Luck has given them every reason to lose and it still hasn’t worked. Wong Wei Long is coming back. Wu Qingde is in top form. Leon Kwek might be cleared to play after being diagnosed with Dengue Fever. Hitech is missing out a legit starter and a bonifide sixth man. They will also have to try to integrate a new part into the team.

Everything is going the Slingers way. Nothing seems to be going Hitech Bangkok City’s way. I say Slingers beat Hitech by 5.

Feature Picture from Onvisa Thewphaingarm
You can follow Tones & Definition at the following media outlets as well:
BLOG: tonesanddefinition.wordpress.com
Facebook: www.facebook.com/tonesanddefinition
Twitter: @tonesndef
Line: @bne9911j (the “@” is a part of the ID)