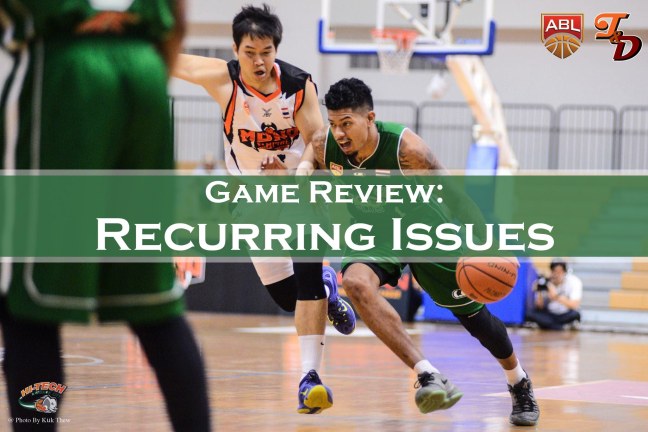 The Mono Vampires gave up a lot of running space for Hitech Bangkok City in transition ultimately causing the loss. Old habits are hard to break.

For the Mono Vampires, it was a similar game against Hitech as it was against the Singapore Slingers. They found themselves in a big hole early on getting run out of the gym on fastbreaks. Then they cut the deficit down to only two points. It wouldn’t end in as close an affair this time, as Hitech Bangkok City stepped on the gas pedal one more time and never looked back.

We’re a little bit past halfway through the season for each team, so I’ve pretty much come to conclusion that what we see right now is pretty much what we’re going to be getting. That’s what we got from both Mono Vampires and Hitech Bangkok City; the same old things we’ve been seeing.

The nature of the fastbreaks that the Vampires surrendered were different from the ones in the recent Singapore game. Hitech didn’t completely rely on Chris Charles to run up and down on every single fastbreak to finish like Justin Howard did. Instead it was more of a combination of the speedy combo of Goldstein, Lamb, and Dasom sprinting forward and pairing that with Steve Thomas’ or Freddie Goldstein’s passing.

However the component differences were, the results ended pretty much the same. Hitech finished the first quarter on a 14-0 run (mostly on fastbreaks) and took the lead at the end of one period 22-10. When the game got close, Hitech went on another run based on fastbreaks in the third quarter to break open a 20-point lead.

According to FIBA LiveStats, Hitech scored 24 points on the fastbreak. With Anthony McClain and Mike Fey struggling to get down on defense, Hitech were able to exploit this advantage to the fullest. It also helped that Tyler Lamb was point on this game, going for 4/8 from three-point range almost all of them from fastbreak pull ups threes.

But it wasn’t as easy for Hitech Bangkok City to score in a half court scheme especially in the first half where they only managed 33.3% shooting. They would finish the game at 41.0%, but they felt the wrath of the defensive presence of Anthony McClain.

McClain finished the game with a statement performance of 8 blocks. Freddie Goldstein and Tyler Lamb started out trying to aggressively attack the rim, but after a couple of tries which ended up in getting swat away by the Big Vampire, they had to rethink their strategy.

Goldstein ended the first half going 0/8 and ended the game getting blocked by McClain 5 times. The thing that everyone loves about Goldstein is that he doesn’t give up.

Once the second half started, Goldstein slowly changed the way he attacked the basket. He still drove towards the rim, but started to drop off passes at the last second. A few passes would get McClain to second guess his commitment to going for the block against Goldstein and that hesitation gave the diminutive point guard the room he needed.

You can see McClain hanging on Steve Thomas to prevent the pass in some plays, which gave Goldstein a better chance and laying it in. But in the later stages of the game, McClain decided to go back at Goldstein for the block, which made it easier to drop the pass of to Thomas.

Mike Fey came up huge once again against Hitech. He hit plenty of midrange shots including 2 crucial three-point shots that kept the Vampire in the game.

His 42.1% shooting isn’t spectacular, but it was among the best for the Vampires in this game.

His efforts on the boards and on the defensive end is debatable, but at least his offense was there in this game. The Hitech defense did find it hard to stop Fey without sacrificing some of their interior defense. However, it did also effect the perimeter spacing for the Mono Vampires perimeter players. While it did open up space for McClain inside, the Vampires never got to take much advantage of it. McClain would shoot only 9 shots this game (partial credit for Steve Thomas for the defensive effort).

Both teams seemed to not really want the ball that much as they combined for a total of 37 turnovers among each other. Hitech played a fast paced game and the Vampires ran with them so the ball was going back and forth a lot.

One offender of a large chunk of the turnovers was Wuttipong Dasom.

Dasom showed this game that he is still one of the best locals in the league at finishing on the fastbreak and cutting in the halfcourt set.

However, Dasom still has had problem’s with handling the ball in general. There were times when he would lead the fastbreak himself, ending up in a bad pass or dribbling the ball out of bounds.

Dasom is still young enough to be considered “under development” but that window shuts faster than you know. He’s going to have to improve his shot and ball-handling skills if he is to seriously be considered as one of the best in the country.

As mentioned, both teams were pushing the tempo a lot which lead into a lot of turnovers. But it wasn’t all bad for the Mono Vampires that resulted from rushing the ball up the court. The surge in the second quarter (a 16-4 run) was led by the sudden explosion of Kannut Samerjai and Chanachon Klahan when they suddenly attacked the basket as soon as they got the ball.

It might not have always ended up in direct baskets, but the drives got fouls out of Hitech Bangkok City which led to free throws. And they also got Chris Charles into foul trouble as well.

In the last game between these two, the Mono Vampires got Chris Charles into foul trouble which should be considered a huge plus for any team looking to take down the defending champs. Mono Vampire Manager, Apichok Saekow, knew that as he so emphatically expressed.

The Vampires were able to draw plenty of fouls on Chris Charles in this game as well and were actually able to foul him out with about 2 minutes left in the game.

That 5th foul might have been a bit too harsh on him though.

I guess an elbow to the face should be considered enough contact for a foul…but let’s look at the context of the play here:

There was no swinging motion. That was the typical stance of someone who just rebounded a ball and was protecting it from players who were ready to swipe it from behind him (which is exactly what happened, by the way).

What happened next might be a bit controversial. Charles looked to his right side, saw Freddie Goldstein, and was ready to pass. He saw Darongphan behind him and was going to change his mind, but it was too late. Contact was made and the foul was called (I know Chris Charles and I’m leaving the scenario that he moved into Darongphan to create contact out of the question here).

Darongphan, being the veteran that he is, felt the initial contact and saw the opportunity coming. He made sure the refs saw what happened and added a little bounce at the end. Classic veteran move.

Here’s my opinion on the whole matter: The foul was a bit too harsh on Charles, especially as his final and fifth one. There was contact made, but it was more of the defender rushing to find an arm in his face more than the offender throwing an elbow at him. As for the action from Darongphan, he did a good job selling the foul and making sure the refs saw what went on. It happens all the time and the fact that it was magnified so much was because the camera caught all of the action in slow motion and decided to show it on replay.

Hitech Bangkok City made a couple of pretty serious blunders which in a closer game might have proved fatal.

Hitech had never played in CU Sports Complex before and they might have been thrown off by the multiple lines of the multi-purpose court. Tyler Lamb and Attaporn Lertmalaiporn turned the ball over when they mistook the blue line of what I am guessing is the Volleyball court for the border of the Basketball court.

This is why teams should take sometime to get some shootaround sessions when they go to an away game.

To close this section on a lighter note, I guess it’s always fun to watch the Mono Vampires play at home because Mono Vampire Girls, bro.

But when you have Steve Thomas yelling for the ball to stay out on free throws…I guess that’s what happens.

More proof that Steve Thomas is an ageless Wizard.

Hitech grabbed 19 offensive rebounds in this game or 42.2% of all offensive rebound opportunities. Hitech turned that into a 20 points advantage over the Mono Vampires in second chance points.

You can’t let that happen and still expect to win.

We didn’t get to learn much from this game about the two teams. Except for maybe anyone who has never watched Mike Fey play, who has now gotten a chance to find out that he has quite the shooting range.

The Mono Vampires still have quite a problem on transition defense and when their three point shots don’t fall, they suffer.

Hitech Bangkok City is a really scary team on the fastbreak when Steve Thomas gets comfortable throwing the long pass. Their offense is still heavily relied on the mood of Freddie Goldstein however.

So…really pretty much what we already know about both teams.

Hitech Bagkok City will be playing their next game against the Saigon Heat on January the 13th at home before going on a 5 game road trip. The Saigon Heat are coming off of a tiring road trip where they blew out the Pilipinas MX3 Kings but were blown out by the KL Dragons. They have a brief rest at home before visiting Hitech, but that demoralizing loss to the Dragons might be a lot to recover from.

The Mono Vampires get a week of rest before hosting the KL Dragons who opened up 2016 with a convincing win. Of course, the KL Dragons have struggled away from home (relatively compared to their performance at home). The Vampires will have another crack at a statement win for their playoff hopes here…and if they miss out on this one, it might be time to say goodbye.