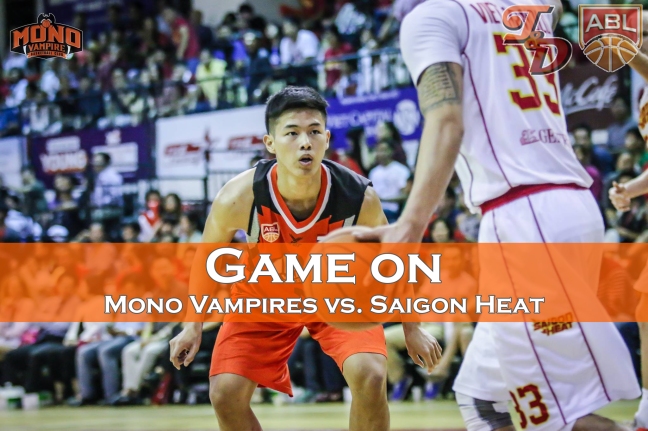 It hasn’t even been 48 hours since these two teams played and here they are meeting up in Bangkok to play again.

The Saigon Heat took the win again in their home court in the game last Friday. It looked to be a grind it out game with both teams in deadlock at 41-40, Vampire lead.

The Heat slowly broke away in the third quarter rallied behind aggressively attacking the rim and getting to the free throw line and broke away completely with the Will Creekmore putting on some finishing touches in the 4th quarter to round up his 22 point, 12 rebound game.

The Heat once again fed off a lot from their home court energy with the fans going crazy with every run they made and that probably played a key part in their victory, as always.

This time, however, they will be playing the Mono Vampires in Thailand where they will lack that sixth man spark from the stands. The Heat have only played one game away from home this season and they weren’t able to rally as they did back at home, but that’s only one game and we’ll see how much the Saigon Heat really depend on their home court advantage in this crucial away game.

The Mono Vampires missed out on an opportunity to turn things around before the start of the second half of the season last Friday with that loss to the Heat. Their playoff hopes have taken a huge hit, but it’s not all lost yet. They can start by defending their home turf in this game. It will be their second game at home where they are undefeated, mainly because they have only played one game against the MX3 Kings.

Turnovers have been cut down lately, with only 15 against the Heat in their recent game but it was another problem that had arisen in that game.

To say that Free Throws are a new problem for the Vampires is not completely correct, because it’s been bothering them all season. It’s only just been overshadowed by other issues. The Mono Vampires were dead last in free throw percentage before last Friday’s game at 53.4% (where no other team shoots less than 58%). They shot 6-17 from the line against the Heat.

Anthony McClain is certainly struggling from the charity stripe (shooting at only 43.5%) which hurts a lot considering how many free throws he gets. He went 1-8 against the Heat.

But Free Throws are probably not even at the top of the worries for the Mono Vampires right now, as their player rotation has seem to gone out of funk. It’s been awkward watching Coach Prasert make substitutions lately and whether that is caused by a misunderstanding between the players and the coaches instruction is something to discuss further on, but it just seems like the players that Coach Praset are sending in aren’t suited for the situation of the game on hand.

Defending home turf is crucial for keeping that playoff hope alive and the Vampires better get their act together to end the first half of the season on a high note.

Moses Morgan is an all around player for the Saigon Heat being able to do a little bit of everything for the Vietnamese based team. But more than anything, I feel that the Thai-American has been a “Big Shot Bob” type of player this year. At almost every game-changing (or potentially game-changing) shot, Moses Morgan has been at the center of it.

If the Vampires can keep Moses Morgan quiet or at least throw him off his game, that could do wonders for their chances in this game.

Home Court advantage is nothing to joke about. Home teams have won 60.4% of their games dating back to ABL Season 5. The Saigon Heat have only won 33.3% of their games away from home and even then, all their away wins have been in Indonesia.

BUT…the Mono Vampires have plenty of problems on their hands and I feel that the Saigon Heat will have enough fire power to steal the win here by 6 points.