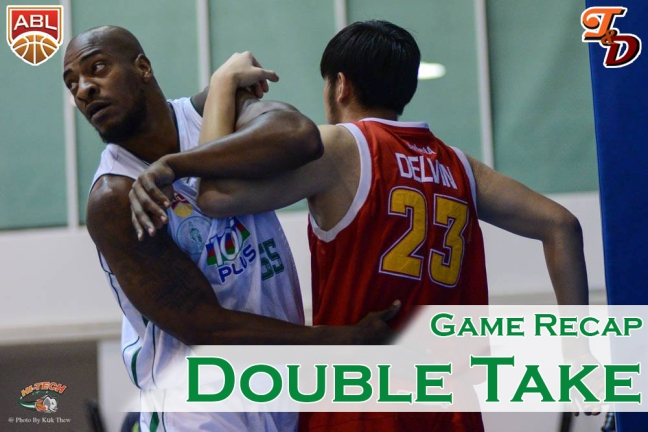 The last time Hitech Bangkok City lost this much at their home court (or for that matter, on any court) in the past two years was against the Singapore Slingers in last year’s season ending match up by 21 points.

Again, it would be the Singapore Slingers to take Hitech Bangkok City down.

To be fair, that Hitech Bangkok City 21 point loss to the Slingers last season didn’t really mean anything as the result of that game didn’t have an effect on the playoff standings. They would also be playing each other in the next round of the playoffs, so both teams were kind of going through the motions.

This 19-point loss however, was quite a different story.

Before you say anything, I will be changing the format of my game recaps. Personally, I felt they were getting too boring and stepping away from why I started writing this blog in the first place. Hope you enjoy it anyways!

With all due respect to the Singapore Slingers, this was a horrible game to watch. I’m guessing even Slingers fan will only enjoy this game for the fact that they were beating down the defending champions on their practice court (which I guess makes it a very enjoyable game).

But both teams made a lot of turnovers, committed a lot of fouls, and spent a lot of time at the free throw line. I think we should give out a medal for the fans that made it to that game to not only watch their team (Hitech Bangkok CIty) get crushed, but crushed in such boring fashion.

In retrospect, I should have chosen a better way to file the highlights of Desmond Oh stealing the ball form Hitech Bangkok City, but what’s done is done. And now I have multiple files named “151130 Desmond Oh Strip”. I wouldn’t actually blame anyone for seeing that file name and judging me.

Dirty misleading file names aside, Desmond Oh stripping is one of the most enjoyable things in the ABL. (Again with the misleading phrases).

Oh has been playing in the ABL for six seasons with the Slingers, and his longevity is certainly not because of his scoring. Desmond Oh is one of the most tenecious defender’s in the ABL and he’s earned that respect. Nowadays, he sometimes gets away with being too aggressive on the ball-handler, but it might be because the refs are used to his defense and let it go.

Tyler Lamb suddenly went missing in this game and it’s a game he will want to erase from his memory any way possible. No one wants to remember going a season-low 1 made field goal (15 attempts) and season-high 5 turnovers. Maybe the 8 game rest from the last ABL caused too much rust or maybe there was too much partying after Hitech won the local Division 1 tournament the night before.

Tyler did also continue to rack up another buzzer beating shot at the end of the first quarter as his only field goal pushing his league leading count for such shots to a grand total of 3.

For the past years, Delvin Goh is like that pokemon you keep in your sixth slot with your other 5 really good pokemon just so you can throw it in the first encounter to share EXP.

Finally this year, he’s at that point where he can hold his own for a couple of turns.

Without Russell Low as his buddy on the low post, this year it’s been up to Goh to hold down the paint along side Justin Howard.

And I really have to give him credit for not dong so bad, especially going straight up against Steve Thomas and not backing down.

Ng Han Bin didn’t really do much in this game but it was just nice to see him return to the line up after having been absent with a knee injury. Han Bin scored 5.2 points per game along with 2.8 rebounds per game last season.

I was never completely impressed with Justin Howard’s game. He never displayed freakish athleticism or offensive elegance that you would expect of a dominant force in this 12 games last year with the Slingers and the Indonesia Warriors.

As I’ve got to watch him more and more, I’ve gotten to appreciate more about his game. Howard is still an efficient scorer (55.6 eFG% last year and 57.2 eFG% this year) using an array of lazy looking post moves and ugly jumpshots. Not the most attractive game to watch, but deadly efficient.

The best aspect of his game is his verteran side. Howard fouled twice only 3 minutes and 40 seconds into the game but he ended up finishing the game without fouling out. For him to do that while still playing solid defense and scoring deserves much respect.

You keep doing you, Justin Howard.

That there is the field goal percentage of the Hitech Bangkok City team. If you feel like that is low, let me tell you that 28.4% is the lowest that any other team has shot this year.

Not the MX3 Pilipinas Kings who have yet to figure out what sort of team they are. Not the Mono Vampires who do not have an ASEAN Import. But Hitech Bangkok City, the defending champs, are the ones who have had the worst shooting night in the ABL.

Pretty much says everything about how much they struggled in this game.

I’m impressed with the quality of play that the Slingers have been displaying, especially with all the personnel change they’ve been through. I honestly feel like everyone already knows what you have to do to beat them. Push the pace and get Justin Howard to foul out.

But it’s just so hard to do that with the Slingers grinding the game and Howard avoiding fouls at all cost.

On the other hand, I’m not really impressed with Hitech, but not worried either. I feel like this is an anomaly of a game more than anything else. You aren’t going to catch Tyler Lamb going 1-15 again anytime soon and if he does, Chris Charles will have more to say than just 11 points.

Is it something that Coach Jing Ruiz will have to look into? Yes. But should he lose sleep over it? No.

Because last week’s article were completed at such a late time, Hitech’s next scheduled game as of press time will now be against the KL Dragons on the 13th of December. It will be one of the most anticipated match ups of the season as it will be their first match up since last year’s ABL Finals and with both teams standing among the top of the league, you can expect a tightly contested game.

DO NOT MISS THAT GAME.

The Slingers will be playing the Saigon Heat in another away game at CIS Arena on the 12th of December. The Slingers did well in their last match up in CIS Arena by beating the Heat, but the Heat will be having Stefan Nguyen this time around. Nguyen might be playing limited minutes, but it was those limited minutes that gave Hitech Bangkok City a headache in their recent matchup as well.