It took them 5 games and 5 close losses, but it was about time that the Mono Vampires broke through and won their first ASEAN Basketball League game.

Maybe it was their plan all along. Perhaps it was all orchestrated since the beginning for the Vampires to play all 5 other teams in the ABL to gain information about them just to bring them down in future games. Whatever the case, after a few close calls, the Mono Vampires officially have 1 win under their names and they are now out of the race for being the league’s next Laskar Dreya South Sumatra.

The celebration is well-deserved after all they’ve gone through but if I were Coach Prasert Siripojanakul, I would spend too much time bathing in the limelight and work on a few things.

The Vampires started out of the oven on fire as Ratdech Kruatiwa finally broke out of his slump of 17 consecutive missed three-point shots to connect with 2 long bombs in the first quarter (and another long two because he stepped on the three-point line).

Charles Mammie would do some damage himself in the early stages of the game. He scored 9 of his 11 points in this quarter and got the mythical stat of 1 ripped off barricade. Unnecessary, but impressive nonetheless.

It didn’t get any better as the game progressed for the MX3 Kings as their lazy defense and defensive rebounding gave up easy shots for the Mono Vampires to grab easy points.

“Palm” Darongphan Apiromwilaichai dropped the final dagger with a halftime buzzer-beating three pointer to give the Vampires a comfortable 52-42 lead heading into the halftime break.

But then, because it’s Mono and they love playing in close games, they gave up a mini 6-0 run after subbing out Anthony McClain. That would close in the gap before Ratdech Kruatiwa gave them more breathing room with a three point shot. Then the Vampires allowed another run when AZ Reid attacked his mismatch over Chanachon Klahan ferociously.

That would bring the Kings to within 1 point before Nattakarn Meungboon dropped another huge three point shot to push the Mono Vampires away again.

Anthony McClain came back into the game a couple of moments later and made us wonder why he left in the first place as he went on a rampage that put the Vampires up by 7 points…and then the Vampires gave up turnovers to allow the Kings to get back to within 3 points. The third quarter ended at 67-64.

With only 10 minutes left in the game, the Vampires seemed to have felt an urge to claw closer to that elusive first win. They went out on a tear (highlighted by an athletic three-point play by Quincy Okolie) to put the lead up to as much as 13.

Everything seemed primed for the Vampires to start popping out the victory champagne. The Kings tried to inch closer to prevent the upset, but even when they were wide open, they couldn’t hit their shots. The Kings went a miserable 4-22 from long range and they suffered for it.

So of course, Coach Prasert subbed in Jittapol Towaeroj and Chaiwat Kaedum for Ratdech Kruatiwa and Anthony McClain with 4 minutes and change left in the game.

I understand the type of coach that Coach Prasert is. He loves developing players and he loves to see them grow before his eyes. With four minutes left in the game, he chose to field in Sorot Sunthornsiri (a 21 year old ABL rookie), Jittaphon Towaeroj (a 24 year old ABL rookie who hadn’t play the entire game), Nattakarn Meungboon (who had played really well in the game, but was still only 24), Chaiwat Kaedum (an ABL veteran, but has only played in bits and pieces and doesn’t have the ball in his hands that much), and Quincy Okolie (an athletic import who has yet to solidify his status as a first option on the team).

A 13 point lead with 4 minutes left in the clock against a pesky, fast, team like the Kings is far from a safe lead. I’m sure that Coach Prasert acknowledges that, but I feel that this time, he let his passion for player development get the better of him.

Around the 2 minute mark, the Kings had forced turnovers to close in to a four point deficit. Coach Praset finally decided to put back in his vets; “Palm” Darongphan, “JO” Ratdech, and Anthony McClain.

It would be a crazy merry-go-round back and forth from there with the Mono Vampires turning the ball over and the Kings missing the chance to score on those turnovers.

The Kings would get their attempts to tie the game and take the lead, but they missed and failed to defend “Palm” Darongphan on the easiest of attempts and his 3 straight lay ups would seal the deal for the Mono Vampires to win the game 85-81.

The Mono Vampires finally got the win, but if I were Coach Prasert, I’d be far from pleased with how the team played. And that’s exactly what he would say in the postgame meeting.

The Vampires gave the Kings every chance to steal this game away, but luckily for them, the Kings counldn’t get the message.

It’s a great morale win for the Vampires, but I’m sure that Coach Seng feels like this game is a step backwards from the progress this team showed in the game against the KL Dragons.

As for the Pilipinas Kings, they still haven’t figured out what team they are and it hurt even more that Head Coach Jack Santiago was not available to coach this game. They go through bits and stretches where it looks like they know what they should be doing and follow that up with a possession when someone dribbles the air out of the ball and pulls up an ill advised shot.

Much more progress needed for both teams.

Almost one-thirds of a season has gone by and right now, the front runner for the most entertaining player has been AZ Reid.

How many players are willing to give up on a defensive set up to get their hair set correctly?

How many players can pull off a mockery of another person flopping and make it look so majestic?

HOW MANY PLAYERS CHEST BUMP THE OPPOSITION AFTER THEY COMMIT A 24 SECOND VIOLATION?

I’m a sucker for cool inbound set plays and ever though this one was a pretty simple set up from the Mono Vampires it worked pretty well.

There was barely nothing to that more that three guys forming a wall to get Natakarn Meungboon open for the three-point shot. It might not have worked with a more active defensive unit, but I liked the simplicity of it.

Chaiwat Kedum doesn’t get to play that much, but he’s been able to produce quality minutes once he gets on. In this particular game, look at how quick he moves to hedge out the ball-handler on pick-and-roll situations.

For a guy his size, he sure does move quicker than anticipated and it threw the Kings’ guards off their course.

Here are some crucial stats that might make you get a better picture about what actually happened in this game.

Mono Vampires had 18 offensive rebounds. That is a 49.1% Offensive Rebounding Rate. That also roughly translate to almost one extra possession off of every other missed shot. Of course, it’s pretty hard to do much when your tallest player (Charles Mammie, 6’8″) spends most of his time on the bench avoiding fouls and your only other inside player (Carlo Sharma, 6’5″) is left to go up against McClain and Okolie.

Another astounding number is that the Mono Vampires turned the ball over 22 times. That would account for the 2nd highest total that a team has committed, with first place being the Mono Vampires against Pilipinas Kings at 24.

With the Vampires getting a win while turning the ball over and missing free throws so much, it just goes to show you how valuable offensive rebounds can be.

It was entertaining to see Ratdech Kruatiwa make shots again.

I supposed that there could be something in the air of playing in the Philippines that makes his shoot better. He is now 9-18 from three point range while playing in this country.

It was a desperation play, no doubt and I guess that the Mono Vampires might have not been commiting their fullest on defense, but I loved this inbound set play drawn up by Interim Head Coach, Cholo Villaneuva.

The initial setup looked like a normal double screen down low with a pin screen up top for Acuna to curl and get the ball close to the inbounder. 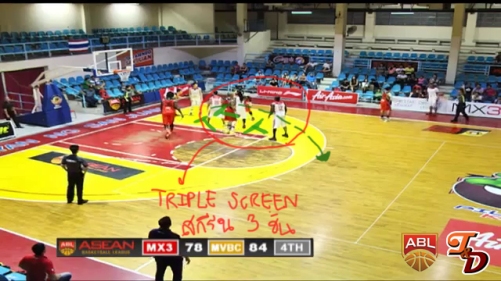 Darongphan bit on the bait and went up high cut off the direct pass. But he didn’t expect that Val Acuna would dive under the screen to get the ball at the top of the key. Darongphan would run into Charles Mammie’s screen.

It should have been Quincy Okolie to help cover Acuna, but Coach Cholo placed AZ Reid in his spot and had Reid rush out to the perimeter to keep Okolie wondering which way he should go. The Vampires could have countered by switching Darongphan onto Reid and Okolie onto Acuna, but the communication was lost.

Acuna got a wide open shot off a masterful play set up.

And yes, he missed the shot anyways, rendering the beauty of this play almost completely.

The Mono Vampires will look to improve their records further with a match against Thai rivals, Hitech Bangkok City on the 2nd of December. Hitech will have larger inside players so Mono Vampires cannot count on their offensive rebounding to pull them out of their turnovers and free throw woes. Hitech are not invincable and Mono Vampires have the weapons to take them down, but they will have to play a better game than what they have been playing.

The Pilipinas Kings will be hosting another game on the 5th of December when the Singapore Slingers will be making their way to Manila once again. The Kings lost to the Slingers by 8 points the last time around and aside from their games against the Mono Vampires, it’s been the only game where they haven’t been blown out. If the Kings can figure something out by then, the Slingers could be looking at a disappointing road game.