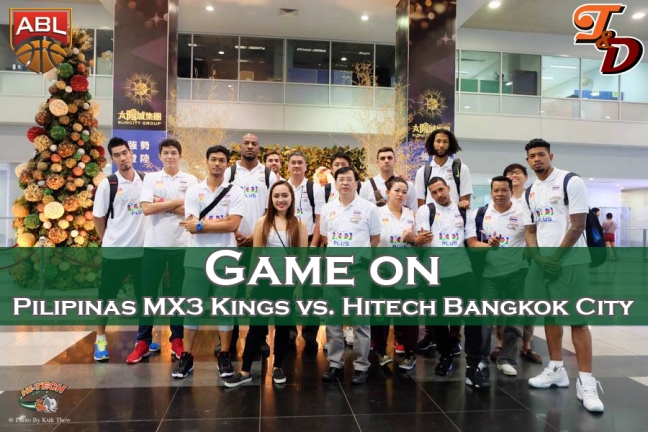 There have been a total of 8 games played into this ABL Season, so it might be a bit weird to say that Hitech Bangkok City might not know what team they will be facing in the game on Sunday.

If you are wondering where the Pilipinas MX3 Kings came from, I wouldn’t be surprised. The Philippines representative team in the ABL was still the Pacquiao Powervit Pilipinas Aguilas no more than a week ago.

Maybe we should have taken notice of the rescheduled November 7th game against the Saigon Heat against Pilipinas Aguilas that seemed to come out of the blue.

But the past is the past, and after some twists and turns, the Pilipinas Aguilas are the Pilipinas MX3 Kings due to some management changes.

Yes, the team logo is what appears to be a crowned Mangosteen done by a graphic artist working on MS Paint with a 5 minute timeframe and that is just plainly AWESOME.

Other than the (awesome) logo change, it appears that the Kings could possibly have a couple of slight roster changes. World Import Charles Mammie wasn’t mentioned in the news report of the teams changes as the key players, and neither were local standouts from previous games like Willie Miller, Val Acuna, or Eric Salamat.

Their past two games as Aguilas Pilipinas have looked less and less spectacular with their slight win against Mono and getting completely beat down by a KL Dragons team that has now been in overtime with Saigon and lost to the Singapore Slingers.

The Kings will be led by their Import, AZ Reid, who is averaging 25 points and 9.5 rebounds in their past two games. While he is only shooting 13% (2 for 15) from downtown, AZ Reid has shown in the past that he is capable of hitting the long range shot. Pairing that up with his post up game will prove to be a headache for Coach Jing Ruiz. Putting bigs like Steve Thomas or Chris Charles might negate Reid’s ability to attack the post, but Reid can draw the two big men away from the basket where their help defense is more valuable. If Hitech puts a wing like Tyler Lamb, Wuttipong Dasom, or Piyapong Piroon on Reid, he could easily eat them up in the post as well.

Hitech will be depending on their bigs as usual, with the ever reliable Charles and Thomas quietly doing their work. They have the upper hand on the Kings right now, but if there is one area that might allow the Kings to pull off an upset, it will be Hitech’s free throw shooting. They are only shooting 48.9% from the free throw line, where they shot 63.5% the year before. It shall be seen if someone can replace the sharpshooting Jerick Canada at the Free Throw line where his 75.8% free throw shooting was one of the best in the league last season.

Word is that Canada might be joining the crowd to watch the game at San Juan Arena as well, so that is certainly something to look out for.

Something else to look forward to is the return of Wuttipong Dasom. He received a DNP in Hitech’s last game against Mono Vampires, which was reported as a last minute injury. He also turned in an unimpressive performance against the Slingers in his first game, so it will be interesting to see if he can pick up the form that made him one of the most intriguing local prospects in the ABL last season.

It’s going to be pretty much hard to gauge how this game will go with all the changes that the Kings have gone through during the past few weeks, but maybe they can pull out a surprise here on their home court against the visiting defending champions.