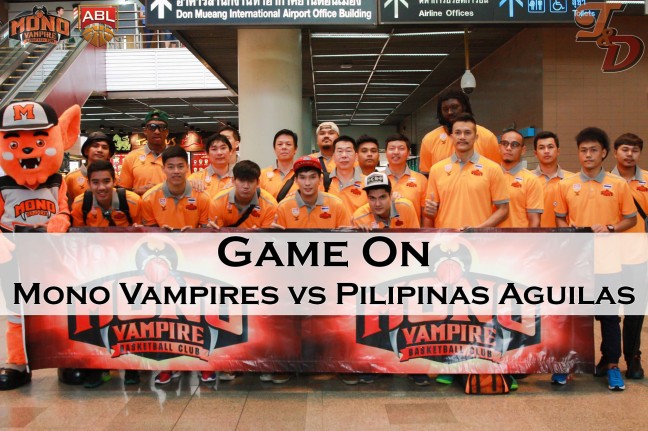 First impressions are crucial. You entire future could lie in the hands of that simple brief moment. That’s what’s up at stake here.

The Mono Vampires and the Pacquiao Powervit Pilipinas Aguilas (who we shall refer to as Aguilas) are the two new teams in the ASEAN Basketball League this season. You can read a season preview of both teams, here and here. In an unsurprising move by the ABL schedulers, they will also be playing each other in their very first game.

Aguilas will have a lot on their shoulders, being the representative of the most basketball crazed nation, the Philippines. Everyone expects them to dominate because of the “Filipino” tag, but even if they do dominate, some fans will still be like “but it’s just the ABL”.

Mono Vampires are a new team. At only almost 2 years old, they won’t be feeling as much pressure to get the win here. This will be their first ever ABL game and they would want to make a statement to cross town rivals (Hitech Bangkok City) that not only can they win in the domestic level (being recent Thailand Basketball Champions), they can win in the international level as well.

Additionally, Mono will be playing with only two World imports with the rest of the roster being locals.

Mono will not be pressured to put out a victory, but if could be a defining moment in their franchise should that win occur.

If we’re talking in terms of pressure, we’re talking about two teams in totally opposite sides of the field. Aguilas will be playing their season opener on home turf and carrying “Pinoy Pride” on their shoulders against a team that will have at least 60% of the players on their court as locals at any given time. I can’t even imagine the backlash of a loss. Aguilas will be pushed to perform and whether it will push them to their peak or push them over the edge is left to be seen.

In terms of pure basketball, if you are thinking that Mono Vampires could be the second coming of Laskar Dreya, you are wrong. Mono has a five-man National Team player rotation all with ABL experience. That should keep them afloat. They will be playing without much pressure and running in Coach Seng’s free flowing offense, it could be really fun to watch.

A big question for Mono: Who is going to stop AZ Reid? Anthony McClain and Quincy Okolie are good shotblockers, but I doubt that they will be able to stay in front of AZ Reid once he starts facing the basket.

A big question for Aguilas: Who is going to stop McClain? As a legitimately big seven-footer, McClain will have at least a 4 inch advantage on whoever Aguilas throws at him.

It should be a fun game and the Vampires should keep it interesting throughout the first half. However, the Aguilas team will be pressured to secure an easy win while the Vampires could be slightly drained from their approximately 18 hour travel to Davao. They also have a matchup against Hitech on the 4th of November, so it might be wise for them to keep themselves fresh for that game. Expect Aguilas to squeeze out a win, but not a totally convincing one.