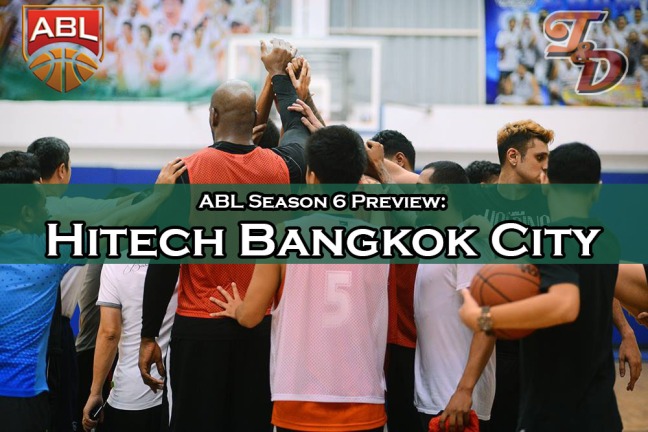 Let’s take a look at Hitech Bangkok City in the ABL!

The ASEAN Basketball League starts in a few days, so I think that it’s time that we started discussing in details about all of the teams now that each team has started filling in their Imports quotas.

The league will consist of six teams from 5 countries (Thailand, Malaysia, Singapore, Vietnam, and the Philippines). Each team will play each other 4 times to make a 20 game season. The top 4 teams advance to the Playoffs where they will play best out of 3 series to determine the champion.

Team rosters are consisted of 16 players.

Two slots in that roster can be used on “World Imports”. World Imports can basically be any player from anywhere in the world. Teams usually use this quota on American Imports who played close to the basket.

Another two slots in the roster can be allocated to ASEAN/Heritage Imports. Here is my understanding of the import ruling:

An ASEAN Import is any player with either

For example, the Singapore Slingers (the team resides in Singapore) could have used one of their ASEAN Import quota to sign me (a Full Thai Citizen) to their roster. Instead, they signed Kris Rosales (a Filipino-American).

A Heritage import is any player who

The wordings of the qualifications for the quotas might be a bit more complicated in the official terms of the ABL, but the main idea is there.

Hitech is considered one of the prestigious clubs in Thailand, having won multiple championships within the country. The club had its struggles early on in its beginning which builds up the pride of what Hitech has become today.

Hitech is coming off a disappointing run in the TBL 2015 where they were eliminated from the Semi-Final round to Mono-Thewphaingarm to highlight their late season slide by losing 3 of their last 6 games.

Winning a basketball season is not entirely about being the best team, but more than being the hottest team at a certain point. Hitech Bangkok City were almost on the wrong side of that theory. They ripped off an impressive 7 game winning streak. Those games were all at home and concern was raised about how they would perform in away games.

It didn’t take long to confirm those concerns to be true as Hitech lost their first away game to the Singapore Slingers. Hitech would bounce back and forth after that, never going on more than a 2 game winning streak. They ended the regular season with a loss to Singapore at home, which was probably to rest their players for the playoffs.

The playoffs started and Hitech never looked back. They won all four games and were especially impressive in Game 1 of the Finals where they dismantled the KL Dragons on the Dragons home court. It was a struggle in Game 2, but Hitech eventually came through to win the title on their home Thailand soil.

The thing about Hitech and why they were so dominant last season was their defense. With Christien Charles and Steve Thomas (you can read about both of them here), Hitech were the league’s best rebounding team (53.7 TRB%) and defensive team (10.3 BLK%, 36.6% Opponent FG Percentage).

Of course, it was more than the two world imports who sailed the ship into port. ASEAN Imports Jerick Canada and mid-season signee Patrick Cabahug made plenty of clutch shots and run the offense just enough to make it work. Hitech also got a mid-season boost from Wattana Suttisin, who finished the season with 7.8 points per game off an efficient 51 eFG%. “Reuben” Wuttipong Dasom, was a two way terror where he could pressure on defense and get out on the fast break to finish as well. Dasom finished the season with 8.2 points per game. “Dave” Sukdave Ghogar got very limited minutes behind Thomas and Charles but his 11.9 TRB% and 2.5 BLK% were tops among locals.

Hitech got plenty of contributions elsewhere from “Nop” Attaporn Lertmalaiporn (who hit a fair share of clutch shots himself), “Kaew” Kannawat Lertlaokul, “Peace” Bandit Lakan, and “Bas” Montein Wongsawarngtham. “Boy” Piyapong Piroon found time away from his responsibility as team manager to play some sturdy veteran defense from time to time.

Save for Wongsawarngtham, Suttisin, Canada, and Cabahug, the main core will all be back. Stepping into Wongsawarngtham’s role should be “Bobby” Nagorn Jaisanuk. Jaisnuk played a couple of games last season, but was dropped from the line up probably due to inconsistent play. He has grown a bit and should be ready to step up into a larger role. This makes Hitech the team that returns the most minutes played from last year at 67.8%. Singapore was second runner up returning 46.1%.

One local addition will be “Nai” Danai Kongkum, who Hitech picked up from the Nakhon Pathom Madgoats after the team disbanded prior to the start of TBL 2015. Nai is a stretch 4 with a solid mid-range game.

Missing out on “Kanu” Wattana Suttisin due to an ACL tear injury during SEA Games is obviously a huge blow, but I feel that the next two signings will smoothen the process.

Perhaps one of the most intriguing moves of the ABL offseason (in my personal opinion, of course) is the signing of two Thai-Americans, Freddie Goldstein and Tyler Lamb. Goldstein had once played in Thailand already in a short tournament from a couple of years ago and you can read some more about him here. Lamb on the other hand is one of the biggest “names” that will be playing in the ABL this year. You can read more about Tyler Lamb here, and about other Thai-Americans, including Saigon Heat’s Moses Morgan, here.

Of the 12 man roster that Hitech Bangkok City submitted, 9 players have already been playing together since last years season. One (Kongkum) had adapted well already in their run in the Thailand Basketball League. That leaves Coach Jerry “Jhing” Ruiz with the task of only integrating Goldstein and Lamb into the system. It might seems much harder than that, but it is a much easier task than what the other teams are asked to be doing.

Christien Charles and Steve Thomas is pretty much all I need to say about this section but it goes a bit more beyond that. The more familiar you are with players, the easier it is to communicate on defense. As noted above, this should not be much of a problem. Goldstein is an athletic freak and he should be a pest for all opposing guards. Tyler lamb played in Ben Howland’s system for two years and he himself has grown a reputation as a defensive player as well.

One thing I saw that plagued Hitech in the Thailand Basketball League was their untimely injuries. They played through the whole regular season without Dasom, Ghogar, Suttisin and Charles. Then came playoff time, and suddenly they (except Suttisin) were starting to play heavy minutes again.

It is possible that these players might have been rushed back into the lineup and made a blip in the chemistry of the team.

Hitech have the depth to withstand an injury, but they will have to manage it well.

Target on their backs

This is actually a bigger deal that what it seems like at first glance, but it’s a similar case to the backlash of being a Filipino team. Hitech will have to withstand the extra effort that teams take towards them. The KL Dragons (even with a mainly new roster) will want their revenge from last year’s finals. Aguilas will want to make a point on their return to the ABL by taking down the defending champions. Mono Vampires will want to take down their local rivals.

The target is painted clearly on their backs and they are going to have to out run the guys who are chasing them.

A team that returns it’s championship core and adds a couple of studs into their lineup should always be considered highly.

I predict a 14-15 win season once again for Hitech Bangkok City.