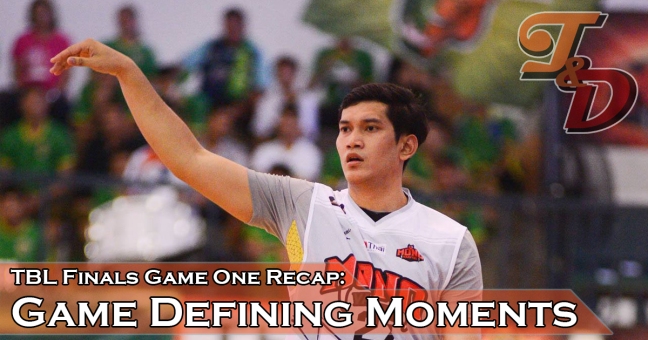 One of my coaches told me that there are two major defining moments in a game of basketball. One is, of course, at the start of the game. If you get off on the wrong foot, it will be hard to follow up and end on a high note. Every one pretty much knew about this already. This was why most of us try hard to be a starter on the team. Every one wants to make their presence felt.

But then Coach asked us what the second most defining moment in a basketball game is. In my head, I thought it was only logical that it would be the last 5 minutes of the 4th quarter. That’s when my coach said:

“If you think it’s the last 5 minutes of the 4th quarter, you’re wrong.”

The underdogs, Mono-Thewphaingarm started out well in this game. They blew off the first quarter to a 7-0 run and even though the Mono Vampires roared back to take the lead at the end of one period 14-13, it was still okay. No one expected Mono-Thew to take the lead from start to finish, but as proven in the Semi-Finals against Hi-Tech Assumption Thonburi, Mono-Thew loved playing in grind it out games.

They struggled heavily to score in the second quarter, scoring only 7 points and were held scoreless for a full 6 minutes. But they were still down by only 6 points at the half time intermission.

And here is where the second most defining moment in basketball starts.

Mono-Thew came out of Halftime and got 2 quick baskets to cut the lead down to 2 points.

And then all hell broke loose. The Mono Vampires went out running and ripped an 11-0 run highlighted by an Anthony McClain Slam Dunk. Again, Mono-Thew were held scoreless for a full 5 minutes.

Eventually, Mono-Thew would cut the lead down to 6 at the end of the 3rd quarter, but the psychological damage was done already. It’s quite demoralizing to cut down a lead to 2 points only to see it balloon to 13 in the span of 5 minutes.

By the start of the 4th quarter, the Vampires had complete control of the game. They controlled the pace and slowly nipped away while gradually increasing the lead before ending the game at 69-51.

This game wasn’t more of a dominating Mono Vampire victory as it was Mono-Thew losing this game. The signs were there throughout the game. At the very beginning of the game, Chitchai Ananti missed two bunnies at the rim. You have to admit that is not a good sign coming from your leading scorer. Another instance was the waning seconds of the first half, where Coach Jo set up a nice play but no one could put on the finishing touches.

You have to give credit to the Mono Vampires for their tight defense especially when swarming the ball near the basket but Mono-Thew missed a lot of shots on their own as well.

In the end, Mono-Thew ended up shooting only 26% with their three primary scorers (Chitchai, Nopporn, and TJ Cummings) heavily struggling.

And that was pretty much it. Mono-Thew did a good job handling the ball (11 turnovers) and they did well on the boards (75 DRB%, 33 ORB%). It just boiled down to the fact that no one could make their shots that day.

The Mono Vampires made it look easy, but handling a Mono-Thew run is not as easy as they made it look. Just ask Hi-Tech. However, the Vampires just withstood blow after blow that Mono-Thew gave them. You just have to give credit to the players for not losing their cool and continued to play their game.

Major props to Nattakarn Meungboon, in particular. He had two points coming into the 4th quarter and while Mono-Thew were trying to build momentum into a run, Nattakarn just threw hook after hook at them to calm them down. He ended scoring 11 points in total off two huge three pointers and this beautiful spin move hoop-and-harm layup.

Maybe this is some kind of suppressed outburst from missing the last 2 games of the TBL Finals from last year with a broken wrist.

The final scoreline of 18 points differential might look bad, but the final tally was exaggerated a bit by two late three point shots when in reality, the game was much closer than that.

Mono-Thew can’t hang their heads just yet. They have to remind themselves that it was just a couple of easy misses and move past that. It will be a whole new game played at their own court for Game 2 and even though they didn’t do very well the last time they played at the Thewphaingarm Gymnasium, out of all teams they should know that anything is possible.

Mono Vampires still do hold the upper hand, as they have since the beginning of the series. All they have to do is be comfortable with their game as they did in this play:

Their depth is still their greatest asset and they just have to play the same way they have always been to assure their first TBL Championship. 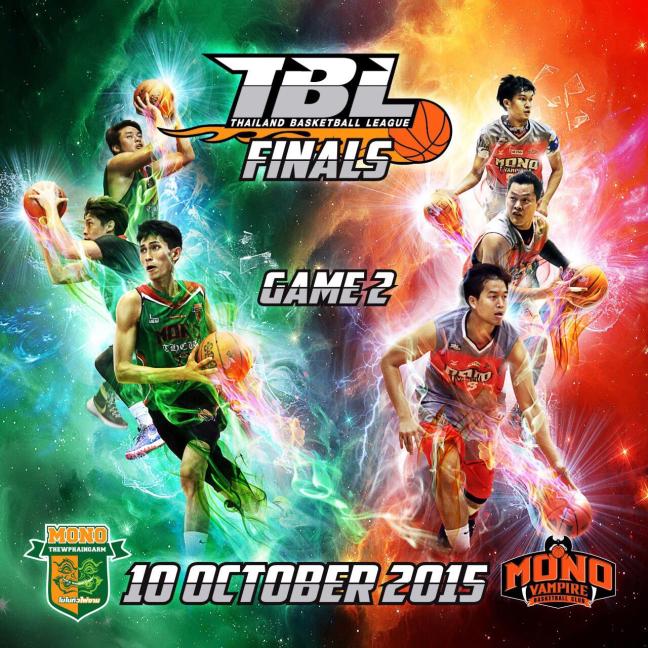 The second game of the Finals will be held this Saturday, October 10 at Thewphaingarm Gymnasium and will start play at 3.00PM. If you can’t watch the game courtside, you can watch it at the live feed at tbl.mthai.com or on Mono Plus (PSI Channel 77) or on the Mono 29 Digital TV channel. Don’t miss it.