With all due respect to Mono-Thewphaingarm, I have to admit that I did not see this coming.

Mono-Thew are a talented group of players. You don’t become a professional basketball team and finish 3rd in the TBL regular season by half-assing your way through it. No one denies the level of talent of the “Green Giants”.

But I am a guy who works with numbers to get an understanding of what happens next in basketball and I have to admit that I did not see this coming.

And yet, the Finals are approaching and it will be Mono Vampires against Mono-Thew instead in a best of 3 series.

Let’s talk about the first contestant in this TBL 2015 Finals.

The Mono Vampires emerged on the basketball scene in February 2014 and they made quite a splash by prying away some of the best talents of PEA. It would be good enough to push them into the playoffs in their maiden TBL season, but they would fall short after losing to eventual champions, Nakhon Pathom Madgoats, 2-1 games in the Semi-Finals.. They armed themselves again with a major signing of Chanachon Klahan going into the BTSL. They would again finish in 3rd place behind Hitech and Madgoats but made their way into the International Round of BTSL…to finish in 3rd place again.

To start off a team finish in 3rd place to obviously more talented teams (at that point) is not something to laugh about, but the Management continued their pursuit for success. During the off-season, Mono Vampires brought in a haul of 3 Thai National SEA Games players, who could be considered as the best in their positions.

That’s some John Calipari Kentucky Wildcat stuff going on there.

Road to the Finals

The Vampires had a pretty chill stroll to Finals. It could have been better without that one loss blip to Hitech Assumption-Thoburi, but:

After that loss to Hitech, the Vampires went on a rampage. They would go on the rest of the season to beat everyone by an average of 23.7 points per game. Only Thai General Equipment (8 points) and Hitech (3 points) were able to keep their losses under 20 points during that stretch.

They entered the playoffs to play against PEA and beat them in two games, surviving a second game scare that saw them trailing for a full 3 quarters.

How they will win:

The Vampires ran through every one with their dominant all-around game. The would be able to blow you out with long range scoring, where they led the league all 3P shooting categories (7.4 made, 26.6 attempted, 27.8%). If their outside shooting didn’t work out, they could go to Anthony McClain, who is practically unstoppable inside (59 eFG%).

Even when the shots didn’t fall, the Vampires were still gobbling up those offensive rebounds anyway. They blew the league away with an absurd 39.8% Offensive Rebounding Ratio.

All of this led them to be the most efficient offensive team in the TBL with a 46 eFG%.

“Maybe all we need to do is just score more than them.” Is something one might think of when brainstorming for a way to beat the vampires.

That’s not going to be easy.

Where Mono-Thewphaingarm are tenacious on ball defenders, Mono Vampires do not look to take the ball away from opponents as straight up like their counterparts. The Vampires only averaged 13.9 forced turnovers (second lowest in the league) because that is their mentality. They don’t expect to get the ball from you by swiping away or pouncing on passes.

They just force you into bad shots. Opposing teams shoot only 32.3% against the Vampires, which is a result of two things:

Everyone has the capability to stay on the court for lengthy periods. This keeps everyone fresh not only for offense, but defense as well.

How they will lose:

They showed how they can lose in their only loss of the season. Free Throws. Mono Vampires are the worst free throw shooting team in the TBL at 57.5%. They left 17 points at the line against Hitech in their first loss and another 15 points in their close game against Thai General Equipment. If you are a Mono Vampire fan, you can get a little shifty when they start missing free throws but it shouldn’t cause you much panic.

Case in point, they will be a bit hard to beat. 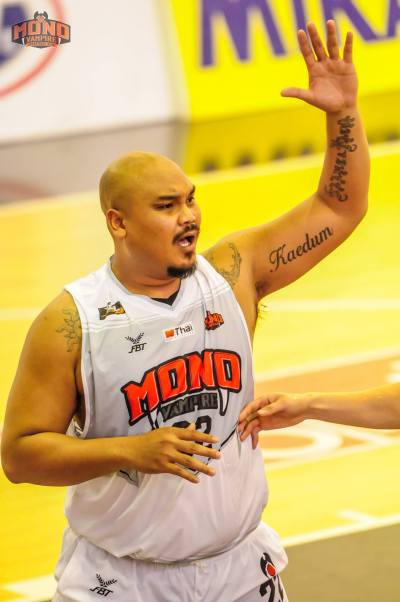 At least one or two of the Vampires’ perimeter rotation are bound to have a good game, so that’s not really something that could make or break a game in this series. Their mid-season Center acquisition, Chaiwat Kedum, might be a key to their stroll to victory. Mono are pretty thin in the front court. After Cadarian Raines and Anthony McClain, it’s pretty much only Chaiwat. Chanachon is not a true inside player and he still plays a lot on the perimeter.

If Chaiwat gets into the game and gets his way against the Mono-Thewphaingarm big men, it could be a done deal.

Now let’s see who they will be going up against.

That mystique has worn off a bit with basketball spreading around to a larger audience and the talent pool of the Thewphaingarm school has seemed a bit below par in comparison. Same goes as in the professional ranks as well. Hitech and Thewphaingarm used to be considered easy bets for a finals matchup. But the Pro game has grown and you have new powerhouses popping up like Nakhon Pathom Madgoats and Mono Vampires starting new teams. These new teams do not look too far for talent and they find plenty of talent under the Thewphaingarm name. Thewphaingarm players are everywhere in the TBL. With the players scattered, the pool for the main team had gotten a bit shallow over the years.

In last year’s TBL (playing as Thew-Charoen Aksorn), they lost their core stars to the Madgoats. To make things even more complicated, they split up into two teams (the other team being CAS-Siam U) and eventually ended up missing the playoffs altogether.

In another major tournament, the Basketball Thailand Super League, They ended up dead last in 5th place.

Then in the offseason, the Madgoats (temporarily) disbanded and a group of Thewphaingarm alums found their way back here.

I expected them to be pretty good…but I didn’t expect something like this.

Road to the Finals

Mono-Thew’s regular season campaign was slightly dull. It might have come down to the very last game to determine which seed they would get in the playoffs, but it was quite clear from a couple of games in who was going to make the playoffs anyways.

They suffered an early season loss to PEA on a buzzer-beater but got revenge in exactly the final week with an 8 point win to edge them into the third seed.

…and then Game 1 happened. Chitchai Anati and Mike Fey combined for 54 points with Chitchai especially shining with 55.6 FG%. And Mono-Thew went on to beat Hitech Assumption-Thonburi by 10 points. On their home court.

Even after that first win, people (including myself) still had it fixed in their minds that it was an outlier. Chitchai had not hit more than 1 three-pointer in a game before that one, and suddenly he hit 3 in this game. No scouting report could have prepared Hitech for that. That wasn’t going to happen again.

…and then Game 2 happened. Mono-Thew had everything set in stage for them. They were playing at home. It was the school’s establishment anniversary day. If they were going to upset this series, today would be the day.

They came crashing down to earth. They had the worst shooting day of their whole season, making only 15 field goals on 24.6% shooting. That 23 point margin would be the second worst of the season. To people who watched this game, it was a confirmation that Game 1 was an outlier and this was how the series was supposed to break down.

And yet at the end of the game, Mono-Thew were celebrating their advancement to the TBL Finals after a year of absence from the Playoffs entirely. Celebrating on their long time rivals home court of all places! They were ordering pizza and eating their celebratory meal right there!

How they will win:

Mono-Thew aren’t the most effective scoring team in the league. Far from it, their 39 eFG% was the lowest among playoff teams and only slightly a bit higher than bottom feeders Thai General Equipment and Dunkin’ Raptors.

But they made up for their inefficiency with quantity. They averaged the most possessions per game (86.37) in the TBL. They might miss a lot of shots, but if they can negate that effect by taking more shots.

To create more opportunities like that, they had to force turnovers which they did very well. Mono-Thew led the league in steal ratio (16.5%) by a wide margin and they forced opponents to turn the ball over 20.3 times per game, also a league high. Their defense pressure the ball handler early in the set and either got the steal there or ended up picking a forced pass. The top three locals in steals per game (Chitchai Ananti, Phumin Singhasem, and Darunphong Apiromwilaichai) are on this team.

The good thing about Mono-Thew is that they have a clear identity and they stick with it.

The thing that will push them over the hump is their three point shooting. In their two wins against Hitech, they shot 41.7% and 44.4% respectively. They shoot 25.8% from downtown when they win and only 17.2% when they lose. If they start making their threes, that’s a good sign.

How they will lose:

They don’t have much depth in terms of scoring. Unlike Mono Vampires, who can field about 6 consistent scorers, Mono-Thew scoring is limited to Chitchai Ananti, Nopporn Sangthong, and their import duo. If two out of the 4 find themselves in a dry spell, Mono-Thew will have a hard time no matter how many shots they get.

Foul trouble could also be a problem considering the depth they have. While Mono Vampires go 10 deep, Mono-Thew goes only about 8 players deep. And with their frantic aggressive style of play, it’s quite common for one of their players to be limited to playing time from foul trouble. Going against Mono Vampires who will send out wave after wave of players, Mono-Thew will have to be more resourceful of their fouls. 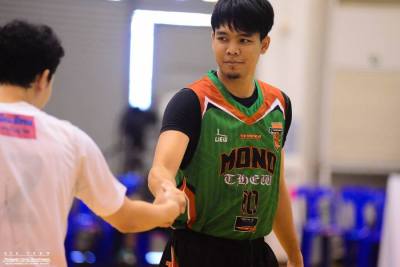 One person who I think still has potential to outgrow his current role is “Mam” Tanakarn Sriboonreung. He had two strong games early on in the season where he scored 23 and 16 points but since then he just seemed to have fallen off the grid. The potential is certainly there but the major issue is if he will be able to unleash here in the biggest stage of the league.

If he does, Chitchai will have another guy on the perimeter to draw the defenses attention because you have to admit that the defense aren’t that afraid of Darongphan or Phumin taking shots. That will create bigger gaps for Chitchai to get to the basket and use his length to score.

Watch out for a breakout game.

This is no slight to Mono-Thew. They are a really good team and I acknowledge their wins over Hitech. But the Vampires are so complete in every statistical aspect I can approach. Mono-Thew are headed into this series as huge underdogs.

But then again, they were underdogs headed into the Hitech series as well and look where that has got them.

The TBL Finals will commence play in the first game on Saturday, October 3 at 3.00PM at Prachanives Stadium.

Let’s get this party started.

One thought on “TBL Finals Preview: Tale of Two Brothers”