Welcome back to the second edition of the Thailand Basketball League Power Rankings!

While the first week was pretty dull in terms of game outcomes, it was eventful purely from the fact that there was actual basketball finally being played. Now without the element of surprise headed into the second weekend of the league, how was the TBL going to fare? สำหรับภาษาไทย อ่านต่อได้ที่นี่

Turns out that there was nothing to be worried about. The weekend started off with two back to back games that ended with last second shots. Another game was a complete routing of double score, which might not seem entertaining, but you have to admit that when offenses click, it is a pretty thing to watch.

So let’s get started with the most powerful Power Rankings of the TBL2015!

The Samyan Ravens are still glued to the bottom spot in the most powerful power ranking in Thailand, but this time they had a good reason for that.

After rumors that the Mono Vampires would be signing former PEA big man, Danupop Piboonvattanavong, turns out that Danupop would be playing for the Ravens instead. But luck was not on the Ravens side as their to-be franchise player suffered a torn Achilles barely days before the start of the season. This unfortunate event led the Raven’s general manager to ask for a one-week grace period to recover from the trauma before starting play.

As I am writing this, Danupop has went through successful surgery and we at Tones & Definition wish him a speedy recovery. We are very much looking forward to his return to the court should he decide to do so.

The Dunkin’ Raptors are still at the 6th position for a couple of reasons:

– They lost (won?) the battle for the last winless team against Thai General Equipment by 15 points. That 15 points would be the smallest margin of loss they have suffered. This will be a long season for the Raptors indeed.

– They had to play a game against the Mono Vampires who were out to prove a point after losing to Hi-Tech on a last second buzzer beater. The Raptors took a beating with a 54 point lost while scoring only 52.

– For mysterious reasons, Raptors were without their dominating import Dalron Lamar Johnson. He might not have guaranteed them a victory, but he would have made things harder for Thai General Equipment and would have softened the blow from the Vampires. His absence caused their rebounding to drop from a last week’s league second-lowest 43.9 TRB% to a miserable 26.3% in this weekend. Their defense was already pretty bad allowing 42.9% last week, but it was horrible this week when opponents made 50.9% of their shots against the raptors. Is Johnson released? Was he sick? Were there any politics behind it? It’s tough to say, but it’s going to be a longgggggg season without him.

With all of that said though, the Raptors are still fighting in this tournament. At the very least, it will be a nice platform to gain experience for future competition. Right now though, they just have to bite through the blows.

Thai General Equipment finally got a win, but that was still not enough to push them up the power rankings. They had their shot against Mono-Thew, but lost by 25 points in that match-up. They struggled on offense against Mono-Thew, shooting only 23.8% and it cost them a lot.

You can’t really blame a team full of teenagers to be inconsistent. You can/t blame Evan Brock either. He is playing his butt off and you can’t expect him to come over and drag a team of kids into a power house team. That’s like expecting the Philadelphia 76ers to become a legit playoff team if you put LeBron on their squad. It might  happen, but it’s going to take more than 4 games and 2 weeks to see results.

Surprisingly, Anasawee Klaewnarong and Suppawich Kukantin have played a total of only 25 minutes combined this past weekend. While Patipan Klahan has thrived in his expanded role, the remaining trio of Thai General Equipment’s Big Three have been glued solid to the bench. Should these two start getting more playing time, their experience and maturity should help TGE a bit more.

TGE had a monster weekend rebounding at 67.0 TRB% pushing them to a total of 59.7 TRB% to lead the league. Evan Brock is the league’s second best rebounder (24 TRB%, 10.5 RPG), Chanatip Jukrawan is the league’s local leading rebounder (22.6 TRB%, 8.25 RPG), and Patipan Klahan is a few spots behind. So at the very least, they seem to have the rebounding department covered.

I wanted to move them up the list as it wouldn’t really make sense putting them below the team that they just beat this week…but this is my power ranking and I shall do whatever it is I want. Seriously though, I had trouble putting PEA up ahead of Mono-Thew because they are still lacking in identity. Their win was a result of the luck of a long rebound and the unbelievable acrobatic three-point shot of Moses Morgan.

They have the potential to be a very dangerous small ball three-point shooting team with Chalormdech Limsuwan (37.5%) and Patiparn Krutsorn (33.3%)…who are playing less than 10 minutes per game. Release the hounds and let them shoot!

PEA are still not using very many players. They have the least amount of players averaging at least 10 minutes per game and of all the players in the TBL that are playing over 35 minutes per game, two are playing at PEA. I get that Jordan Collins has been playing like a man possessed (Only player to average at 20-10, 23.5 ppg and 11.5 rpg) and Moses Morgan will be revolutionary for Thailand Basketball, but for them to be playing that many amount of minutes and using that amount of possessions is a bit unhealthy.

The win over Mono-Thew is going to be crucial at the end of the season to decide the play off seedings, but PEA needs to find an identity and hold on to it really fast. 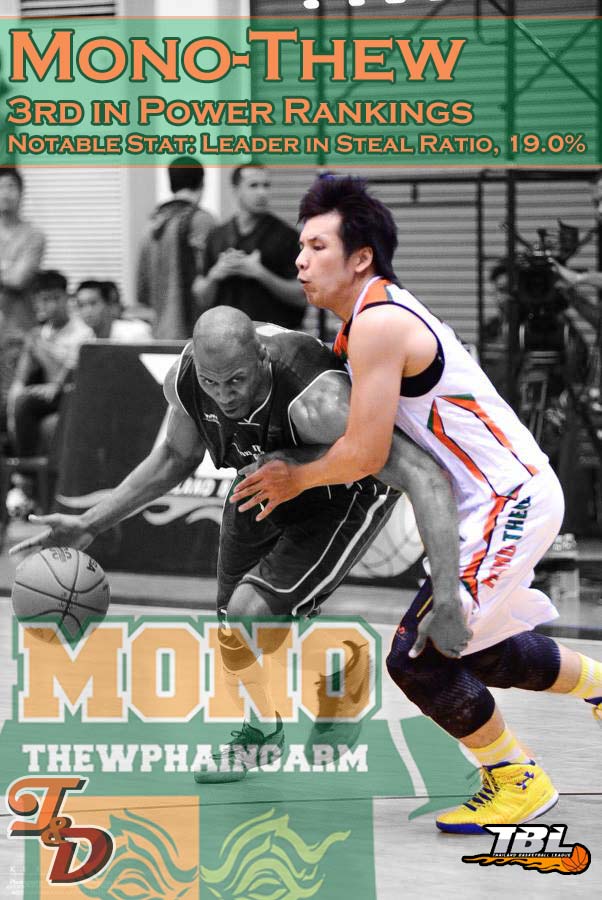 I really like the way this Mono-Thew team is shaping up. Last week, I singled out their struggles on making and preventing baskets and they did well in this week to improve on that. This week they allowed their opponent’s only 28.4% made shots, and they shot a respectably well 43 eFG%.

TJ Cummings is still struggling to score, hitting only 37.5% of his field goals and 40.0% of his free throws. As the import of the team, he needs to pick it up a gear.

Their three-point shooting is still very bad (17.0%) but they do have streaky shooters like Chitchai Anati (21.4%) and Tanakarn Sriboonreung (30.0%) that might be able to change that.

While they struggle on offense, their defense seems quite set. They lead the league in forced turnovers (23.0 TOPG), steals (13.5 SPG), and steal rate (19.8 STL%). If they can work things out of offense, this could be a very scary team in the playoffs when the pressure of the game kicks up another notch.

This is a tough pill to swallow for Mono Vampire fans. They did every better this week in terms of numbers:

And yet, after starting the season ranked as the most powerful team in the most powerful Power Ranking in Thailand, they drop down a spot. Even after almost completing one of best comeback wins in recent TBL history.

And they can’t really blame anyone either. Hi-Tech played a good game (more on them later) but the Vampires left 17 points hanging from the charity strip after going only 11 for 28. The bright side is that it seems like an outlier considering they shot around 70% in other games.

A good sign for the Vampires is that they came out breathing fire the very next day (at the expense of the lowly Raptors) to be the first team to break the century mark (102 points) and shooting over 50%. Jittaphon Towaeroj must have let out a sigh of relief in this game, where he broke out for 8 three-point bombs after going 0-for-11 in the three prior games.

Once everyone figures out their roles and embraces it on this team, we might get a different story in the second matchup of the two giants. 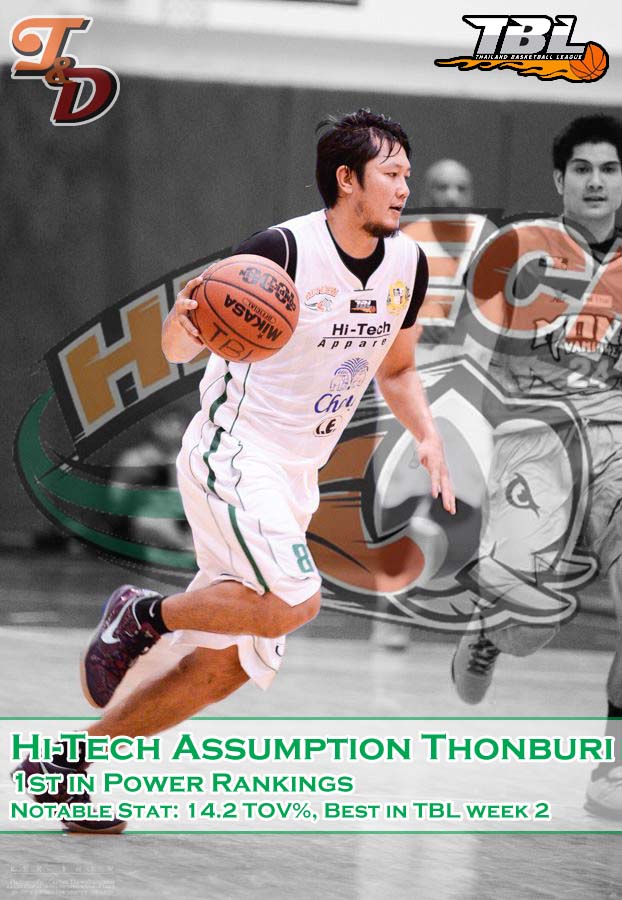 Undeniably the happiest team in the TBL at this moment are Hi-Tech Assumption-Thonburi.

The team started out a bit gloomily in the TBL. As teams left and right brought in exciting and talented new acquisitions, Hi-Tech for most of the part stayed put and added only Danai Khongkhum. But even then, Hi-Tech were without the two SEA Games Cadets, Sukdave Ghogar and Wuttipong Dasom.

4 Games in, still no sign of Dasom and Ghogar, but Hi-Tech has weathered the storm and are undefeated. They have balanced their scoring well. The resurgence of Suppachai Sangthong has given them a really nice additional weapon from the perimeter with his passing and slashing. Their scoring efficiency took a huge drop to only 39 eFG% this week and so did their rebounding, but despite all that, they stand alone as the lone undefeated team in the TBL.

But they were only one Mono Vampires missed box out away from going into overtime against a deep Mono Vampire team and you can’t over look that. Hi-Tech still needs Dasom and Sukdave to come back and give them that boost of star power if they are to make a run for the title. Don’t forget that this team currently only has 2 of last year’s top 7 local scorers, Nakorn Jaisanook and Piyapong Piroon, and Piroon has not been playing in last year’s shooting form.

The 4-0 record looks nice right now, but they can’t let that get into their heads as they look to end the first leg of TBL2015 against a surging Mono-Thew.

So here is the updated Power Rankings for the Second weekend of the TBL2015! 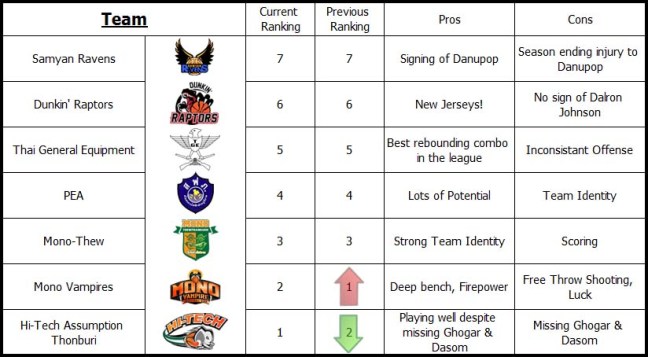 We finally got our marquee match-ups (Mono Vampires vs Hi-Tech, PEA vs. Mono-Thew) and they certainly didn’t disappoint. Teams will close up their first leg campaigns this weekend where we will only be having 3 games on Saturday as the schedule below:

Will the Raptors get their first win? Will Hi-Tech finally lose? Will Mono Vampires continue to breathe fire?