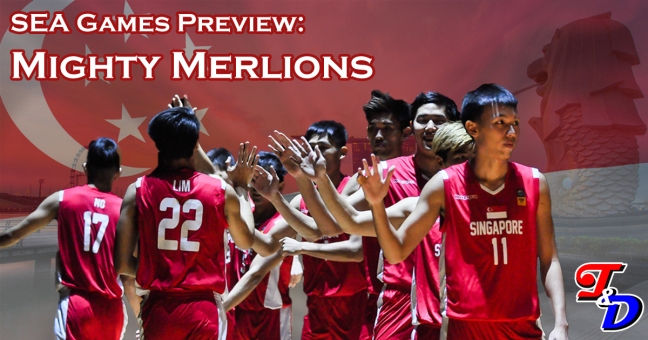 As the teams of the SEABA Championships approached their positions for the award ceremony, you could feel a sense of dissatisfaction from the Singapore team.

Winning bronze in any international competition is no small feat, but I think Singapore set the bar for themselves a bit higher than that.

The team has been on a rise as of recently in part because of their 2009 revolutionary core (Desmond Oh, Wong Wei Long), who are now in their prime, and the development of their other homegrown talents. Singapore was also the host of this years SEABA Championship, so everything seemed to finally start to fall in place for them.

In the SEA Games in 2013, Singapore impressively kept it close to the dominant gold medalists, Philippines, when they lost to them 88-75. That 13 point margin would be the closest anyone got to the Sinag Pilipinas that tournament.

Was it so farfetched for Singaporeans to expect that this year’s version (who returns all of their core players with an added boost of being hosts) could actually get the Gold?

Of course, we all know how the story went in SEABA. The Golden Dream shut down completely when the Malaysian National Team went and gave them a loss on their own home soil even before they could challenge the Filipinos in the final matchup.

But SEABA is SEABA, and the SEA Games are another beast altogether. Let’s take a small preview at what the Merlions have to offer.

What they can do:

Their on-ball pressure is one of the best in the region. Headlined by Wong Wei Long and Desmond Oh at the top of the press, the Singapore defense has forced teams to cough up 24.8 turnovers/game which is ahead of all teams, including the Philippines. Their steal rate is second in SEABA at 25.6% leaving quite a huge gap between 3rd place on the list, Malaysia, at 18.2%. The Singaporean guards are quick on their feet and are good at maintaining their balance.

One of the reasons that Singapore are good at getting to the line is their ball rotation. In a half court set, they are quite aware of the defense rotation and have a good sense of where to move the ball.

Because of this, they are able to get players in good position to score leading to good shots and draw fouls leading to the aforementioned large amount of free throws.

To top everything off, they hustle to get rebounds. They have only two true big men in Russel Low and Delvin Goh. However, they had a True Rebounding Percentage (TRB%) of 53.77% which was second in the SEABA Championships (almost a full 16% behind the Philippines). The highest rebounding total in one game was by their lead guard, Wong Wei Long, at 15 boards against Malaysia. If you don’t pay attention to their perimeter players, they will make you pay for it on the boards.

What they need to improve:

The numbers don’t actually point to anything that seems concerning for Singapore. They are found mostly around the top half of every statistical category, which is a good sign.

The things that might hold them back are some little things that happen in spurts and instances that can’t be captured in the big picture.

Sometimes they allow the opposition to take advantage of their defensive lapses so easily that you question their defense.

Sometimes, it’s the occasional crucial play that they let slip by like this breakaway fastbreak by Wong Wei Long with one minute and 44 seconds left that could have brought the game to within 2 points had he went up the hoop a bit stronger.

Maybe that’s the drawback of pressing hard for most of the game. The more you press, the more easy it is to slip every now and then. If Singapore are able to maintain their intensity throughout the entire game, they will probably have less moments where they might look back and wonder what could have been.

What a turnaround this has been for the Singapore Slingers’ ASEAN MVP of the ASEAN Basketball League (ABL). Wei Long was the only local player to average in double digits, going for 10.4 points per game in the ABL. He didn’t go off the the SEABA Championship, scoring a pedestrian 6.6 points per game. Wei Long is still one of the best Iso players that this region (outside of the Philippines) has to offer.

His efficiency is something to question though. He had a mediocre 42.0 eFG% in SEABA and it’s not something we haven’t seen before. Wei Long shot only 37.9 eFG% in the ABL. However, Wei Long has showed from time to time that when you need a basket, he can and is willing to get you that basket.

What has really turned the table in the SEABA Championship for Wei Long has been his Usage Rate and Turnover Rate. In the ABL, Wei Long was 6th among locals in Usage Rate and the only few that topped the 20% mark. Even more impressive was his 12.1 TOV% which would be the lowest mark among players who actually had ball handling duties and were not primary shooters. In SEABA, Wei Long had a 24.0 TOV% and had a Usage rate of only 13.22%.

Hopefully, “SEA Games Mode” Wei Long will not be the same as “SEABA Mode” Wei Long, as they will need a legitimate scoring option on their team.

Here’s another Singapore Slinger that seemed to have a complete turnaround. Low went from being one of the top 2 local rebounders in the ABL (11.9 TRB%) and finished out the SEABA Championship as Singapore’s 4th worst  rebound (8.19 TRB%). His offense didn’t get much of a boost, scoring 7.8 points per game in SEABA, opposed to his 4.86 points in the ABL while shooting at approximately the same eFG%.

Watching him play though, you get to see that he has improved a lot on his post play footwork.

He might still look really stiff and is still struggling to finish shots, but seeing that he has hit quite a low in SEABA, SEA Games should probably be the right time for Low’s performance to go up.

At this point, I wonder if I should just throw away everything I know about the Singapore National Team from the Singapore Slingers experience out of the window. The 22-year-old didn’t show any sign in the ABL that he would be such an important cog in the National Team line up. Sure, he was a good hustling forward and did his well in his limited role but the SEABA Championship came by and now we can see Qing De as a much more improved player.

Qing De was the only Singapore player to average double digits (10.6 points per game) and he did it on an impressive 47.7 eFG%. His 11.74 ORB% is top 8 in the tournament is something that has been in consistency with his ABL performance. Qing De, aka Scrappy Q, plays scrappy and he will out-hustle everyone. He has embraced a larger role in this team (evident by his 20.17% Usage Rate) and he has done so by rarely turning the ball over (9th lowest TOV% in SEABA with 9.08 TOV%).

Qing De has seemed to step up from his role as a bruiser and agitator. He is already a nice, young building block for Singapore and if he continues this rate of improvement, things will keep on getting brighter.

Young Stars (On the rise) 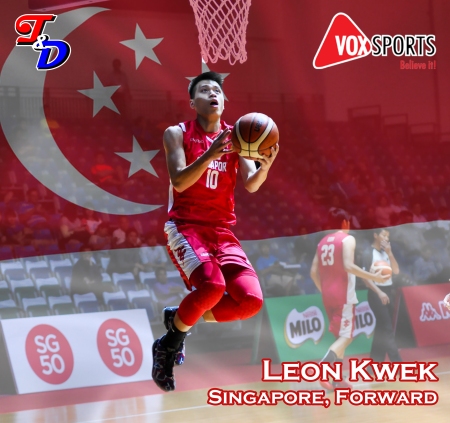 Kwek didn’t have the sort of impact that I had expected out of him in the two games tapes I watched from Singapore. He was Singapore’s second leading scorer with 8.0 points per game, but as each match went by and the opposition got better, his scoring kept dropping. He started out by scoring 18 points in the SEABA opener and was held to 8 points in two games against Malaysia and Philippines.

But still, Kwek displayed a nice sense of offensive awareness. He has the physical quickness to blow by defenders and finish and occasionally, he gives you a glimpse of what might come.

His defense still has to improve a lot. He looks out of place for most of the time on defense where the other Singaporean players usually look like a cohesive unit. But he will have a lot of room to improve.

Did I mention that he is only 18-years-old?

This dude is 18-years-old. How many points were you averaging in an international basketball competition when you were 18-years-old?

I expect a breakout performance from Kwek in this SEA Games and maybe if he is added to the Singapore Slingers roster this next ABL season. 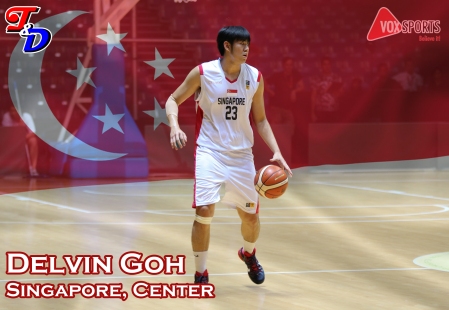 Can we still call Delvin Goh a rising star at this point? He is 20 years old and has been floating around in Singapore Basketball headlines for a while now. Having watched him from the ABL to SEABA however, he has still yet to make the leap to be called a solid star yet.

Goh is an accomplished rebounder. He was right up there at the top of rebounding among ABL locals (10.9 TRB%) and it was the same in SEABA (18.3 TRB%, 8th in the tournament). This is something that he has always done well and will continue to do well with his well-established big frame.

Something he has to continue working on (and something that seems to have plagued Singapore recently) is finishing. Goh takes most of his shots around the basket, so I still find it surprising that his Effective Field Goal percentage is hovering around only 37%. For a high volume isolation scorer like Wong Wei Long, 37 eFG% it’s easy to understand, but for an inside player who gets most of his shots off offensive boards, it should be much better. Goh has shot his free throws well enough, so all he needs is to make the easy baskets in front of him.

Delvin Goh burst on the scene a couple of years back and while there’s still plenty of time to go for him, he needs to pick up the pace of his improvement.

Singapore cruises through group play but barely loses out to Thailand in an “Avoid Philippines” match up. They rematch again with Sinag Pilipinas and once again pull a hard fought game, but eventually loses. They move on into the bronze medal game against Malaysia, but having pulled out all their tricks against Philippines in the game earlier, they ended up being too tired and miss too many shots before losing out.

The Singapore players can’t seem to score at all against an upstart Vietnam squad who are making their first SEA Games trip in a while. They eventually lose and after another lose the following day to Thailand, fail to advance to the elimination round.

Singapore’s defense eats up the Thailand National Team in the group stages and they advance to the elimination round to play Malaysia. Fired up with revenge after the SEABA Championship defeat, Singapore locks down Malaysia and proceed to the Finals against Philippines.

Valiantly, the Merlions play their hearts out on their home court and Wong Wei Long gets a chance at a game-tying buzzer beater which barely clangs off the rim. People will write songs about their battles and Singapore firmly stamps their presence on the basketball scene before heading into FIBA Asia.

That wraps it up for the SEA Games hosts, Singapore, national basketball team preview.