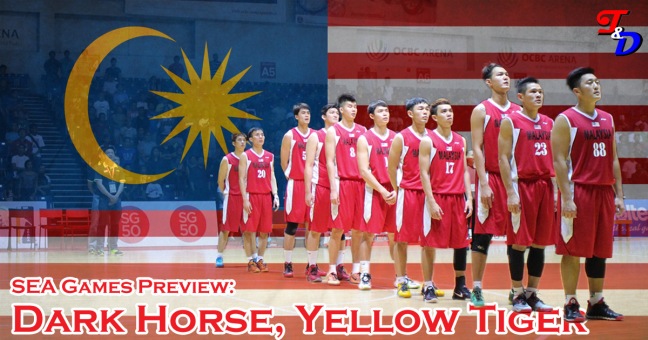 Here’s my Sunday confession: I didn’t expect much from the Malaysian National Team in the past SEABA Championship.

In my head, it was supposed to be Sinag Pilipinas (slightly covered here) with Singapore running away with second place. In my defence, Singapore were the host and they had a really good core of players who had been playing together for a long time. But let’s leave talk about Singapore for later.

Now, let me defend myself for why I had gave up on Malaysia.

Loh Shee Fai was one of the ABL local players who were in contention for the ABL Local Player of the Year. His 34 three-point shots made were only behind Leo Avenido and David Harrison, two players who played almost twice as many minutes than Shee Fai. He wasn’t just a chucker either. He made 34.0% of his three-point shots, while chucking about 5 shots per game. Among Locals who took a significant amount of shot, Shee Fai was placed firmly second in Effective Field Goal Percentage with 49%.

And then he tore his ACL.

Yim Shen Hao didn’y play as many minutes as Loh Shee Fai in the ABL, but he was a pretty good shooter once he got the chance to show his stuff off. He exploded for 19 points in a late season game against the Saigon Heat. Only Wattana Suttisin, Wuttipong Dasom, Wong Wei Long, and Mei Joni (What’s up Laskar Dreya!) scored more than that in one game. He attempted 28 three-point shots and made 50% of them, which might not be significant, but cannot be overlooked either. He didn’t take enough shots to be significantly considered, but his 60% effective Field Goal Percentage would have been even better than teammate Justin Knox.

And then he injured his knee as well.

Two potential dead-eye shooters (and one, Shee Fai, who was primed to be the Ace) were suddenly out for the Malaysian National Team Yellow Tigers (A moniker I picked up from the Football scene). Could you really blame me for overlooking them a bit?

Of course, Malaysia went into the SEABA Championships and stole second place right in Singapore’s home court.
Which only helps to prove that I really don’t know much about basketball…

So here we are, two weeks away from the SEA Games. Let’s take a look at a team who should now be considered as a solid contender to reach the Finals.

What they can do:

It could be misleading to point at their tournament three-point shooting percentage (2nd in the tournament, 27.5%) and say they didn’t take much of a hit from losing those two shooters. But if you take a deeper look in a match by match situation, it turns out that excluding the game against Laos (where Malaysia shot a ridiculous 15/35 from three), their 3p% drops to a pedestrian 23.3%.
Still, they have a pretty good shooting big man, Tian Yuan Kuek, who is a long stretch 4 and is one of the focal points of this team.

Their numbers weren’t kind to Malaysia’s rebounding (47% Total Rebound%, 4th). However, if you take out the games played against Philippines, where Malaysia rested their best rebounder Ivan Yeo, Malaysia sits firmly toe to toe with Singapore in Rebounds per game. Malaysia are physical and are willing to bang it up inside and get the ball.

Here are two things they did do well regardless of competition: Get the ball to the right people. They had the second highest assist rate in the tournament at 25%, way behind Philippines 31%, but only because it’s the Philippines. This point will only get better seeing that they added steady point guard, Wong Wee Seng, into roster for the SEA Games.

I got to watch them in only one game (against Singapore), but in that one game, they played solid enough defense to disrupt Singapore from getting any rhythm with a solid matchup zone.

Teams playing against Malaysia will have to watch out for their backdoor cuts which they all seem to have a good understanding of when to make a cut for an easy basket.

This is a solid team that doesn’t really excel in doing anything in particular, but they do the things that need to be done quite well.

What they need to do better:

Other than shooting from behind the three-point line, they have to also make a whole lot more of their free throws. They made only 43.08% percent of their free throw shots which was dead last in the tournament and could be a potential game changer in close game situations. No doubt that Indonesia, who are in the same SEA Games group as Malaysia will be taking note of this.

Another thing to be concerned about Malaysia is their slow pace. Tong Wen Keong on his own is a fast player, but Malaysia doesn’t have wings place next to him that are streaky runners to finish on the break. They were last in the league in Pace at 58.45 and they don’t exactly have sharpshooters to make their limited possessions count.

Bottom line for Malaysia, wanting to play slow is fine, but you have to be able to get good shots out of your possessions. And good shots are hard to come by with out the spacing caused by having three-point shooters and if you can’t hit your free throws. 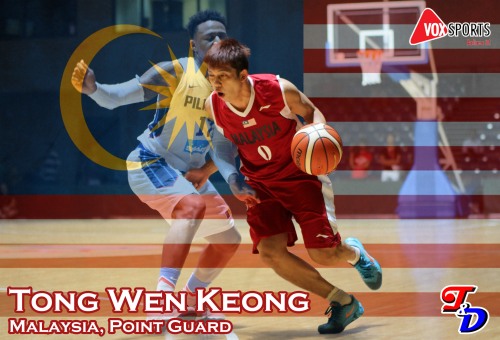 If you have been following this blog long enough, you will have known that I am an admirer of Tong’s game. The Young Floor General was stuck behind Avery Scharer for most of the ABL season, but he did log 10.7 minutes per game. In those minutes, he floored the position quite well. He had 6.11 assists per 40 minutes, which was good for 4th in the entire ABL, and almost a full assist more than Froilan “The Magician Baguion”. He ranked 9th in assist rate in the entire ABL (19.7%) in a very limited role.

Things didn’t change much in the SEABA Championships. Tong was second in assists per game (5.00) and third in assist rate (13.8%) trailing by none other than my other man-crush, Jio Jalalon of the Philippines.

However, because he is the main ball handler, Tong is still prone to turning the ball over, as he was among the “leaders” of turnover rate at 33.6%.

Of course, a player as flashy as Tong will turn the ball over more than not, but the end product is worthwhile as well. 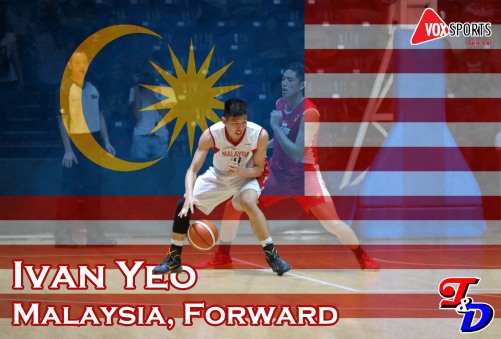 Yeo wasn’t on the Westports Malaysia Dragons in last year’s ABL and therefore I really kind of had no knowledge of him whatsoever headed into the SEABA tournament. Now that I’ve gotten a better look, I have a better picture of what is to be expected in the SEA Games. And I must tell you that they are pretty scary.

I was tipped by my trusted Malaysian Basketball insider to keep an eye out for Ivan Yeo and thank god he did. Yeo bursted on the scene with a 15 point, 13 rebound performance against Indonesia. He ended the tournament leading Malaysia with 10.0 points per game. He was second in the tournament with 11.38 rebounds per game, but was first in rebounding percentage (21.4%).
However, his stats may be a but inflated, because Malaysia sat him out for the game against the Philippines to be fresh for the game in the following day against Singapore.
That move might have removed some of the emphasis from his stats, but it more than solidified his importance to this Malaysian Squad.

Yeo is a bruising forward. He is about as tall as Wuttipong Dasom, but is a bit more muscular and cut. He shot 53.66% from inside the arc, good for 3rd in the tournament for players not playing for the Philippines (this criteria is going to be a trend). He has a nice mid range jumper and has a nice soft touch around the rim to get his shots in.

He seems to have developed a nice Pick & Roll combination with Tong Wen Keong which should be a nice go-to play for Malaysia going into the SEA Games.

PS. This has nothing to do with SEA Games, but if Ivan Yeo joins the Westport Malaysia Dragons next ABL Season, the level of local talent will be quite impressive. 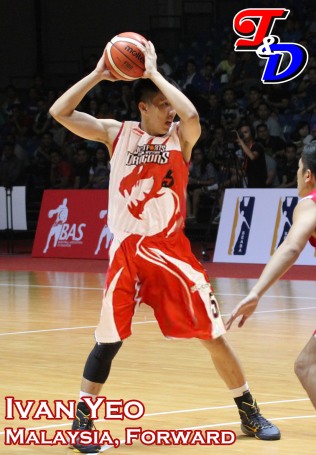 Kuek was the second leading scorer for Malaysia in SEABA efficiently scoring 54.29% from the field and 50% from the three point line. While he could have shot better from the free throw line (20%), his ABL stats don’t really give that much hope (58.3%). He was a solid rebounder in the ABL (6.55 rebounds/40 minutes, 8.6% Rebound Percentage) in 10.1 minutes per game, which is roughly the same rebounding numbers he posted in SEABA (8.3 rebounds/40 minutes, 9.55% Rebound Percentage).

His precense in the game is as a long forward how can stretch the floor with his shooting and grab some rebounds here and there.
His value lies more in that he seems to be the gathering point for the team and the vocal leader.

Malaysia Makes it out of their elimination group in 2nd place with a hard-earned win against Indonesia. They lose to Thailand in the playoff round before, once again, beating Singapore on their home turf in the Bronze Medal game.

In their Rivalry matchup against Indonesia, the refs get pretty sensitive and call a million fouls (not literally, because that would mean everybody fouling out). Malaysia’s struggle at the Free Throw line is real and they lose out to a more seasoned Indonesia team that kept on hitting dagger after dagger free throw. They miss the second round.

Loh Shee Fai and Yim Shen Hao makes a miraculous come back from his injury and helps add firepower to push Malaysia into the Finals before making a valient effort to keep it close against the Philippines inspriring the rival Singapore crowd to be unable to resist a standing ovation once the buzzer sounds.

That will be it for our preview of the Malaysian National Team for the SEA Games! 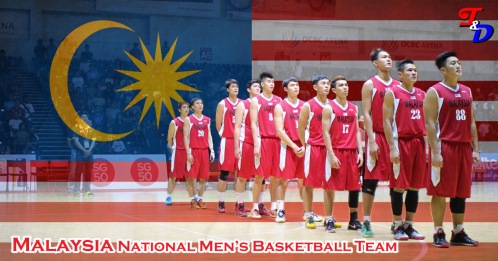