The Facebook notification sounded from my notebook while I was changing into my home clothes (basically just a pair of boxers) after getting back from work.

It was from Ariel Vanguardia, coach of the Westports KL Dragons of the ABL and current coaching staff of PBA’s Blackwater Elite.

I had gotten in touch with Coach AV for a while and we had a nice romantic date to watch a PBA commissioner’s cup game between Purefoods Star Hotshots (where Former KL Dragon, Justin Melton, currently plays) and the Alaska Aces.

So it was nice to hear from Coach AV again.

“Hey! We got tune up game vs. Sinag at 8pm tonight @Meralco gym in Ortigas. Maybe you want to scout Sinag team for your National Team.”

I sat there for a second or two wondering what Sinag was and why it sounded so delicious before figuring out that Sinag was Sinag Pilipinas was the name of the Philippines Basketball team that would be representing the nation in the upcoming SEABA Championship and the SEA games. “Sinag” means Ray (of Light) in Tagalog, so in a way, this team was like a beacon of light for the future of Philippines Basketball. It took me only a couple of seconds before I made up my mind to go to the game. With the SEABA Championship starting on April 27, this seemed like a good opportunity to see the team that is expected to win out the whole thing.

It was a chill 10 minute drive to the venue and I have to say that the Meralco Bolts have quite a nice place here.

The teams were starting to warm up already. I spotted a friendly face in Jerick Canada quickly, having seen him blaze through ABL backcourts the past year, and saw Coach AV. 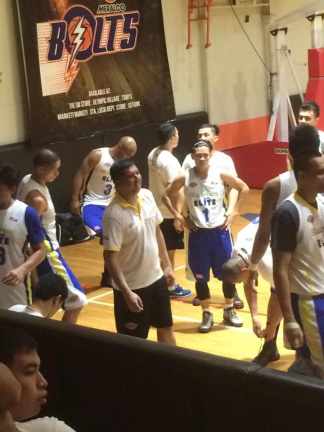 After a little bit of chit chat and catching up, I took a seat and started sizing up the players.

I won’t be talking much about the Blackwater Elite players because they weren’t my main focus throughout this viewing. But then again, this was the first chance I got to see Brian Heruela, who I have a basketball man-crush on. I’ve always had the impression that Heruela was built like a bowling ball when I see him on TV, but I couldn’t be much more wrong. Heruela is built like a wrecking ball. He is jacked and packed up so tight I must be a nightmare for defenders to guard him in while he’s penetrating and a nightmare for offending point guards trying to get by him as well. 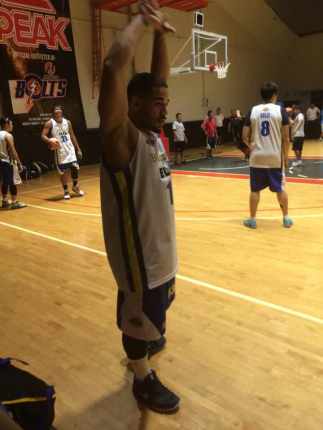 Heruela didn’t score that much, but he pushed the tempo for the Elite quite well. Blackwater still relies heavily on midrange jumpshots and Heruela did a nice job of relaying the ball into those shots. He could have toned down the turnovers a bit. Sometimes he just looks so anticipated to make a certain pass that the defense can read it out completely. 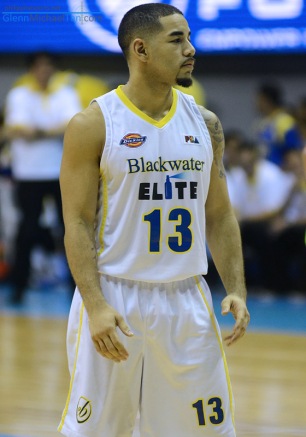 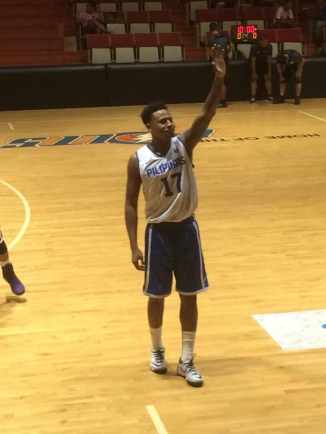 Anyone who follows the basketball scene in the Phlilppines has heard his name at least once. Parks is the reason that Moala Tautua’a isn’t a lock for the first overall pick in next year’s PBA draft. He was 2011 and 2012’s UAAP Most Valuable Player and he’s also a SEABA champion and MVP. I know all of those credentials, but I’ve never got a chance to see in person why or how he achieved them.

So here’s my take on Bobby Ray Park’s game. Remember that I have never watched him before in a full game, so this is just my impression of him in this one game. 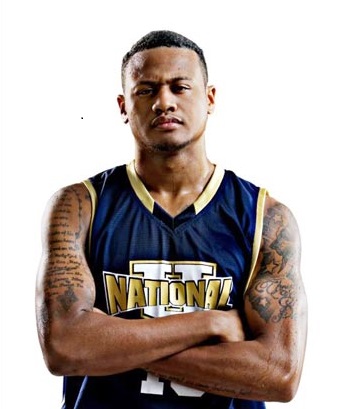 Strengths: Bobby Ray is very fluid and athletic. He doesn’t seem to be “forcing” his body into doing anything, so even the most insane athletic movements from him looks natural and easy. There were several plays where Coach Tab Baldwin would flash Bobby Ray on the baseline. Parks would get the screen, get the ball and make a drive towards the basket in one flowing motion.

I had expected him to be this super-athlete scoring at will over everyone. While he could possibly do that, it seemed he’s more comfortable playing a facilitator more. Parks looked to pass the ball and get the other guys into rhythm more than anything else. With this mindset and body frame, I can see Parks playing the 1-2-3 and maybe some small ball point forward at the 4 as well.

Weakness: I can’t really gauge Parks defensive presence from just one game and it probably wouldn’t be fair to do so. But from what I saw and vaguely remember as I write this, Parks was not assigned to locking down any Blackwater Elite wings and he was beaten off the dribble by Val Acuna and Reil Cervantes a couple of times. Cenvantes is strong and crafty I understand, but Acuna is more of a three-point shooter. You shouldn’t be beat by Val Acuna.

Still, it’s only one tune up game and Parks is the offensive focal point of the team. No point in looking in too much about his defense here.

There are just some players who wow you off right off that bat since warm ups. Troy Rosario is that kind of player.

Again, I have never watched these guys before, having only heard their names in PBA mock drafts and some news here and there. When Rosario leap up for a warm up dunk, I almost left up from my bleacher seat with him.

Strengths: His jumping ability is really off the charts and he could be seen at the highest point of rebounding battles. He is quite versatile on offense, being able to post up and drop hooks shots here and there while also being able to drift away and hit the three point shot as well. I can see him as a nice pick & roll/pop player, as he can both dive to the basket and finish above everyone.

He does a nice job on defense on switches, which I guess is quite easy when you can guard multiple positions.

Weakness: It’s probably nitpicking at this point, but Rosario seemed to be not able to create much of his offense off the dribble.

Considering by his frame and leaping abilities, I expected him to have a bigger presence on defense. Rosario committed a number of fouls he shouldn’t have committed by not simply standing his ground and outleaping his man.

This was the biggest surprise for me. Sinag started the game with star point guard Kiefer Ravena, who had a solid performance on both offense and defense, but he didn’t wow me as much as I expected for a guy who had been pegged as a potential Number 1 pick along side Moala Tautua’a and Bobby Ray Parks.

Instead, I left the court mostly amazed with a player I literally have never heard of and seen. Of course, that is because I haven’t been following Philippines Basketball that closely yet, but the top mental note in my head was “Number 6 of Sinag Pilipinas was awesome”.

I later learned from Coach AV that Number 6 was Jio Jalalon. Which only makes it more perfect because if there anything I love more than his game, it was that his name was so lovable. 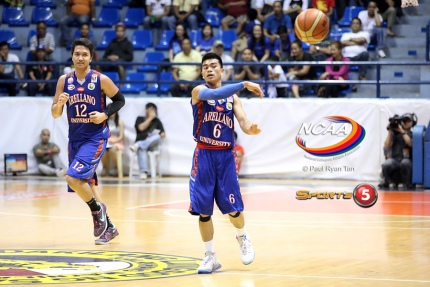 Strengths: Jio completely shredded the Blackwater defense. His dribbling skills might not be as flashy as Ravena, but he did enough to get by his defender. When he did get by his defender, he waited for another defender to collapse in before feeding it off to the open man. He usually found the right man in the right spot with the perfect pass off the dribble.

Sinag’s guards were ruthless on defense and Jio was not an exception. He hounded the Blackwater lead guards and made them advance the game more cautiously. Jio didn’t completely stand out on defense, but that was because ALL of the Sinag guards were great on defense.

Weakness: The exact same reason that made him so good might end up hurting him as well. He doens’t look for his own offense as much and that could lead to defenders just slacking off him to cover up ground. That’s why I think that being Tab Baldwin’s second string point guard is the best scenario for him.

Blackwater Elite and Sinag went into halftime 33-32 in favor of the Elite. But in the second half, Tab Baldwin put in a full court 1-2-1-1 press or something of that variation that forced Blackwater into rushing the ball up court and rushed shots. That press got them quite a nice run and a healthy lead. Later in the game, Baldwin again, tinkered by using a 2-3 zone which locked up ball rotation one the ball rotation moved out of the point guard. The game ended 78-72. 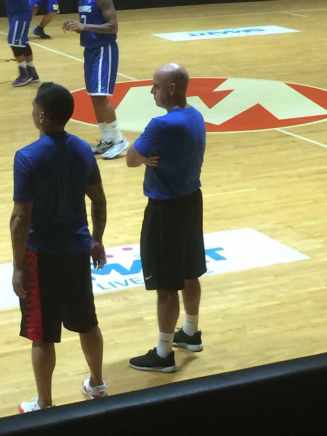 I’d have loved to have some video to be more visual, but my iPhone battery had run low as it always does when I need to use it most.

I think the whole Sinag team got to come into the game (forgive me for not being able to mention all of them) and it was nice to see Tab Baldwin trying out a lot of stuff that he might be using in the following week. 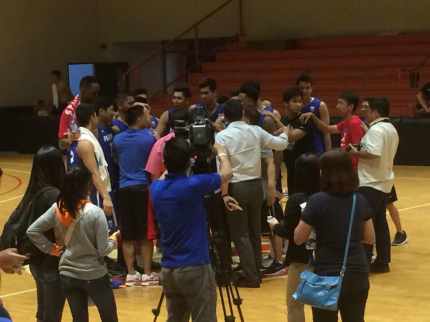 It will be interesting to see how they will fare in the SEABA Championship. This is easily going to be the best team as defending champions with plenty of star power and experience playing at a high level and they will be favorites to win it all. However, Singapore will not be lying around as they have a core of players who have unbelievable chemistry and have been playing together for years and the fact that they are the hosts. Indonesia and Malaysia might have a couple of tricks up their sleeves. Brunei and Laos are probably going to be bullied around (just saying the truth here) but their participation itself makes the competition more interesting.

As for Thailand and where they are in this picture? That’s another story for another day.

PS. I didn’t forget to leave without showing Thailand Basketball some love. 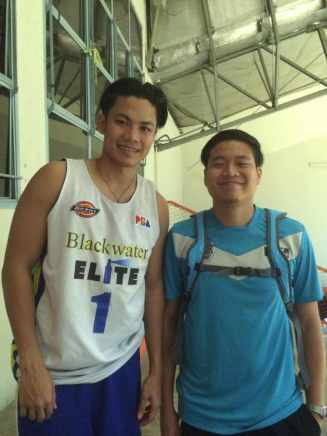 I figured that Jerick would be feeling nice to be at home, but when I asked him, his first response was:

“I do miss Bangkok, though.”