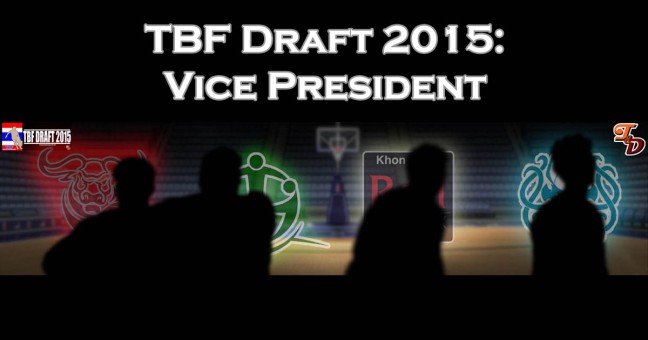 It’s one thing to win one championship, but it’s a whole different thing to win a second one. You’ll have the bulls-eye painted on your back, everyone will be looking to tear you down at any second.

Same here in our fantasy draft, it’s not hard to nail your first pick; It’s your second pick that makes a difference.

In case you missed it, Read our:
Introduction of Team Owners
Team Introduction & Rules
First Round Selections
สำหรับภาษาไทย ตามไปอ่านที่นี่ ได้เลยครับ

Picking your franchise player might be the most entertaining and important part of starting a new team, but it’s the pick afterwards that truly define the skills as a team builder. You have a certain concept for your team once you selected your first player, but can you follow it up successfully with your second pick? Read on to see how our team owners fair.

With the 5th Overall pick of the 2015 TBF Draft, the Mahasarakham Bloody Buffaloes select… 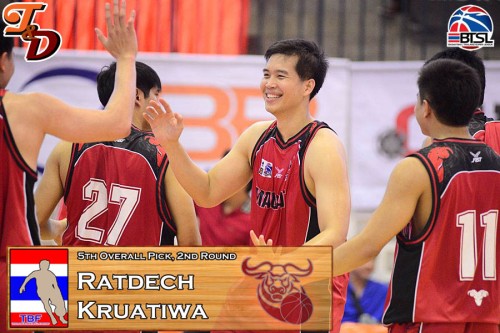 TK: Aside from being able to score, JO is a functional ball handler and a good passer. He has good height, length, and a veteran’s edge. He should pair up nicely with “Bas” Kannut Samerjai to pressure the opposing backcourts.
DAN: Dammit. I thought I had him.
KONK: A true idol of a generation.

The TBL2014 numbers don’t completely love him. His True Shooting% of 44% isn’t bad (for 10.44 points per game), but it’s not top-tier. He does rank 5th in three-point shots made per game which solidifies the fact that he is a threat from downtown, but among the top 5, he has the lowest three-point shooting percentage at 27.2% while no one else in that group shot less than 30%. But his reputation as a three-point shooter might be shadowing everything else he brings to the table. JO is a fair rebounder for a player in his position (3.56 per game) and he also averages 2 steals per game, which is something only 6 players in the TBL can say.
More than anything else, his value is that he is still the most dangerous player in the clutch in an isolation situation. No matter what the number says, if you are on his team and it’s a close game in the final minutes; you either run a play for him or you get him in an isolation.
If that sentence reminds you of Kobe Bryant, well that’s the kind of comparison I was aiming for.

With the 6th Overall pick of the 2015 TBF Draft, Thung Kru Team select… 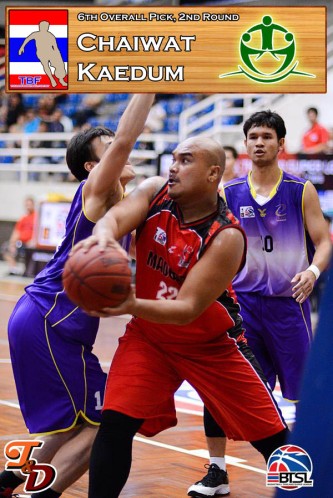 T&D: After choosing Sukdave Ghogar with your first pick and now Chaiwat with your second pick, you see to be building a formidable frontcourt it seem.
KONK: I was looking at “Kanu” Wattana Suttisin and the Apiromwilaichai Twins, but since I got “Dave” already with the last pick, I might as well just finish off with my twin towers first.
KUK: Gone. All gone. Sukedave and Chaiwat. ALL GONE.
KONK: Like I said, I want to take care of the paint first. Thailand has always had a problem with finding a solid center. Yak has been Thailand’s standing center since I was a kid and he still is up until this day.
T&D: That says quite a lot about Yak’s skill level and the quality of Thailand big men.
KONK: Yeah. Still, it wouldn’t be wrong to say that Chaiwat has been the best inside player of the past decade.

Chaiwat might not seem like much of an impact player from his plain numbers (4 points and 3 rebounds per game in the TBL) but he is the kind of player than offense and defenses shift around. He has the size to make that sort of impact. He will get the easy baskets near the hoop with his large frame and he can set bone crushing picks as well. As mentioned with “JO” his value goes beyond what the numbers say. You bring him into the game and the games tempo will have to change, either for better or worse. It’s only fitting that two of the most iconic mainstays of the Thailand National Basketball Team are selected right after each other.

Thungkru Team solidifies their front court pairing Chaiwat with Sukdave, and it will be quite hard to find a pair of inside players that will be able to take them down.

With the 7th Overall pick of the 2015 TBF Draft, the Khon Kaen Rad Complex select… 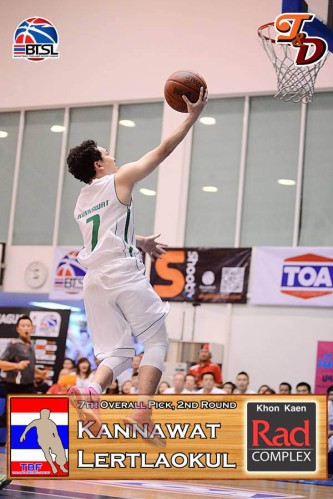 DAN: The small point guard with a big heart.
TK: I was expecting to pick him up easily with my pick. But I already locked up my backcourt.
DAN: I was going to pick JO at first, but you took him from right under my nose.
TK: I’m still open for a trade.
KONK: This was one of the PG’s I was targeting. Do I really have to wait for two of Kuk’s and another of Dan’s pick before I get my own?
TK: I still have to wait for everyone for another full round. That’s too long man.

Kannawat Lertlaokul is and has been one of the premier point guards of Thailand Basketball. He plays with a certain chip on his shoulder of constantly being the smallest guy on the court. He’s a smart scorer who knows how to pick his shots as he showed when he 43.5% in the ABL which is 5th highest among locals [Editor’s Note: I don’t know how this slipped in the write-up about Sukdave, but Dave shot 49% which tops all locals in the ABL with at least 1 FGA per game]. He was also among the top passers among ABL locals, finishing top 4 in assist rate (17.6%) and was second in assists per 40 minutes. When he played more of a lead-guard in the TBL (as opposed to being backup in the ABL) he still found ways to score and facilitate. He averaged 5.94 points per game and 3.44 assists per game. More remarkably was his assists to turnover ratio of 2.29 which was 3rd among point guards in the TBL.
What you are getting with Kannawat is a quick and crafty point guard who is willing to pass. He excels in leading the fast break and Dan’s team pairs him up with the best fast break finishers in Reuben.

This team is ready to run.

The “Phuket Krakens” are on the clock and will be announcing their pi…
Actually, the Phuket Krakens will be stalling their pick for a while.
KUK: I’m going to let you guys wait for a bit, just for fun.
TK: True spirit of a part-time actress. You sure do know how to stir up the drama.
KUK: You guys have been picking right out of my target list. Now it’s payback time.
DAN: I’m going to get some instant noodles to eat while we wait.
KONK: With two consecutive picks coming up, I wonder if you’ll be picking a certain “PAIR” of players.
TK: Whether it is a sibling pack or a twin pack, both are very intriguing.
KONK: I wonder what’s going to be left for us to pick up. I don’t trust Dan because he’s just stealing everybody.
DAN: (slurping instant noodles) Kuk still hasn’t picked yet?
TK: It takes time to pick the perfect guy.

The “Phuket Krakens” will be announcing their pick now.

With the 8th Overall pick of the 2015 TBF Draft, the Phuket Krakens select… 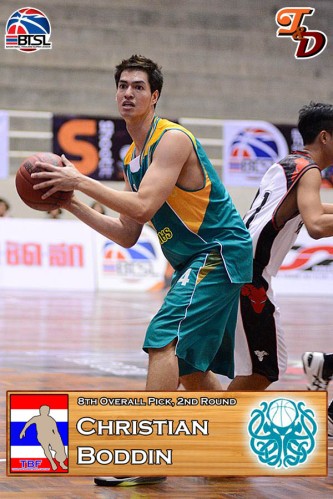 KUK: The experience and strong Center with the height that is able to go up easily against import players with out backing down! A fierce competitor down low who never stops smiles. And hey, he’s quite attractive.
KONK: I like the part about him always smiling.
KUK: I saw Konk’s team solidifying the inside and decided that I have to start building up my post as well.
TK: I’d have loved to bring out the “We aren’t drafting foreign players” joke, but I think the moment passed since we drafted Dave and Reuben…
KUK: Which reminds me that while I was taking pictures at Hi-Tech’s basketball camp, we asked the campers who the imports for Hi-Tech in the ABL 2014 were. A large about responded “Sukdave and Reuben”. LOL
DAN: (wipes instant noodles soup off mouth) Muahaha, I’m ready. Oh, wait. Kuk has one more pick. (gets another pack of instant noodles)

The numbers we have on him (TBL2014) aren’t impressive. He can score and he can rebound, going 4.86 points and 3.71 rebounds per game but that’s pretty much all the numbers have in favor of him. He shot only 40% (not that good for an inside player) and he didn’t record any blocks in the 7 games of TBL play. Yet, we’ve seen him stand up to imports over an over again in the BTSL and the TBL. He doesn’t completely stop the opposing inside import players, but he slows them down a lot and that’s not something a lot of people can say.
You’re not getting a scorer with Christian, but you’re getting a solid defender and a team player.

Judging by Kuk’s First Round pick, Nattakarn Meungboon, she has certainly found a type in the players she has drafted. It might take time for the whole team to be complete before we finally realize the collective power of the Phuket Ravens.

Second Round of the TBF Draft 2015

Each team started out in different direction and have continued in each of their respective directions with the second pick. The Phuket Krakens have teamed up two of the most unsung heroes in Thailand Basketball and we will see if Kuk continues to build a team of collective under the radar talent. Konk’s Thungkru team has secured the skyline with two of the biggest players in Thailand Basketball and might be looking to move on to secure his teams backcourt. The team from Khon Kaen has gotten two of the fastest players and will look to blow by their opponents completely in the open court, but will Dan continue his trend of picking speedsters. The Bloody Buffaloes two players of high steal rate and high shot volume. How that will work for TK’s team and how he will follow that up is still unknown. Here’s the summary of this round’s picks.

Here is a summary of the previous picks.

Feel free to share your thoughts.
Does every pick deserve their position?
Who would you have drafted in which slot?
Who do you feel were a bit of a reach?
Share your ideas in the comments section below or at our Facebook page.

Stay tuned for the Third Round. The Phuket Krakens are on the clock….