In all events of life, the most important part is taking the first step and such is the same in building a basketball team. The very most important step is getting you cornerstone. Eventually all of the players on the team will each have an important role on the team as well, but it is the franchise player that will lead the way to glory.

This TBF Draft 2015 will be filled with entertaining parts until the finish, but if I had to choose my favorite moment, it was the unveiling of each teams first draft pick. This is like the moment where each person has an empty canvas and then starts to dipping their brushes in paint to start their masterpiece.

Of course there is a limited range of paint to choose from, so we can all guarantee that everyone’s “Masterpiece” will be different.

The “Phuket Krakens” are on the clock and will be announcing their pick now.

With the 1st Overall pick of the 2015 TBF Draft, the Phuket Krakens select… 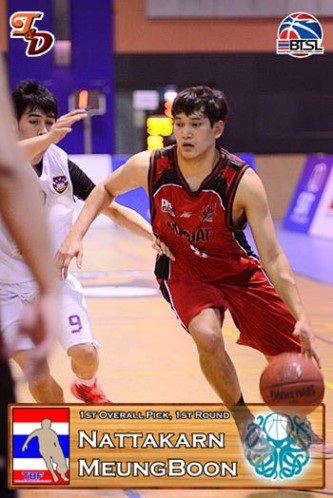 T&D: Why is Arm your choice as the franchise player for your Phuket Krakens?
KUK: I just put all the names in a jar and draw one out.
T&D: ….
KUK: Jokeeeee! I just like my point guards chubby and fluffy.
T&D: ….
KUK: Just kidding! In all seriousness, I view Point Guards as the rudder of the ship that is a basketball team. Arm is a very versatile player and can find the openings to get his team mates open for the shot. As a photographer, I love the face that he makes when he drives in for a lay up! (laughter)

Let’s fish for comments from the other team owners:

T&D: Dan, What are your thoughts on the First Overall Pick?
DAN: MUAHAHAHAHA.
T&D: …Okay then. Moving on. What about you, Konk? Has this shaken up your game plan?
KONK: Arm is a really good point guard and possibly the hottest commodity in the game right now, but my game plan is still on plan. I’m just waiting to see who P’Dan will be selecting.
T&D: And you, TK? How are you holding up?
TK: …I’m heartbroken here. This was my number 1 target. He really knows how to control the rhythm of the game, pick his options, and he can score in various ways as well. This hurts a lot.

So there you have it. After one pick, we have three responses from the other owners. One seemed like everything went according to his plan (Dan), One didn’t really feel the effect of this pick (Konk), and one seems to be completely heartbroken (TK).

Judging by the stats from TBL2014, this might seem like a confusing pick as Arm recorded mediocre stats (5.45 points, 3.91 assists, and 1.64 rebounds per game). But numbers if not viewed as a whole context can be deceiving. Arm was never going to statistically carry the Madgoats with the complete all-around team that they had, but his presence was highlighted on the biggest stage of the TBL Finals when he came down with a wrist injury. He would miss the last two games which saw the Madgoats completely lose rhythm in Game 2. He returned to official competition in the Melaka International Tournament and registered a solid 20 Points, 6 rebounds, and 4 assists game. This was a nice pick and well deserving for the Point Guard. Anyone who has followed Thailand Basketball closely will agree on the impact that Arm can bring to a team and his value.

And for those who haven’t figured it out, He is also the logo of the TBF as well,

With the 2nd Overall pick of the 2015 TBF Draft, the Khon Kaen Rad Complex select…

TK: You just had to do this to me didn’t you, Dan? Have I not suffered enough?
DAN: I just had to do it. When you have a chance to select an attractive face who speaks Thai with an accent, you just have to do it. Jokes aside, Reuben is one the most all-around players out there right now. Tall, quick, good midrange game, good penetration, and good offense game.
KUK: ….
DAN: Muahahahahahaha
TK: One of the best defenders in the game right now, very good in transition, and is almost guaranteed to one dunk per game. Can I propose a trade for a round of beer for everyone?
KONK: But…but…I wanted Reuben! This was my number 1 priority!
DAN: Muahahahahahaha, he’s mine.
KUK: As a photographer, this is one of the best picks. He’s guaranteed for a nice shot and he’s got a huge fanbase following him. My only regret is that I have to wait a 6 more picks before I get to pick again.

Reuben is a rising star in Thailand Basketball. Right now, he’s already among the top-tier. A more consistent offensive game and the ability to create off the dribble will solidify his position at the top. He scored the most points in total among local players in last years TBL (200 points) and was 3rd leading scorer among locals in the ABL (7.95 points per game). Pretty impressive for a guy whose offensive game still needs to be refined. Reuben is better known for his defensive presence and can be seen assigned to the opposing teams ace. During the ABL you can see him glued to the likes of Avery Scharer, Leo Avenido, Wong Wei Long, David Arnold, among others. He is among one of the only 3 local players in the TBL that logged at least 10 blocks and 10 steals. Reuben doesn’t get as many rebounds as one would expect from his leaping ability and frame, but if you are using him as the leading fast break guy, that’s something you have to be willing to sacrifice. As mentioned, he will need to improve on his ball handling skills to be more effective in the half court set, but if you are going to get a building block for the future, you won’t find any better than Reuben.

With the 3rd Overall pick of the 2015 TBF Draft, Thung Kru Team select…

Here’s what Konk has to say about this pick:

KONK: I picked this Thai-Foreigner Forward because his work ethic is incredible. I want a leader that is willing to work his ass of in practice, and I know that Dave is that kind of guy. Plus he’s a devoted Jordan Sneakerhead and he’ll have a big fanbase following him.
DAN: Nooooooo… [Dan is known to be a big fan and is good friends with Dave both being Jordan Lovers and Red Devil fans.]
TK: I feel like I have regroup myself after every pick. Why do you guys keep doing this to me?

Dave is one of the premier big men in Thailand, a very rare breed indeed. In the TBL, he was second in Rebounds per game among locals (7.06), among the top in FG% (52.8%), and was tied for first in Total Blocks among locals (17). When he is the premier player on his team, he will exhibit his all around skills. His per game numbers took a huge dip in the ABL, but that was mainly because the league featured two foreign imports per team (usually inside players) which Hi-Tech played Steve Thomas and Chris Charles a lot together. Still, his per 40 minutes numbers of 11 points and 9 rebounds showed what he might capable of if given more time. His Rebounding Percentage of 12.3% actually led the ABL among local players! In the first 4 games of the BTSL, Ghogar led Hi-Tech in Rebounds, Blocks, AND Assists (excluding Steve Thomas). Just goes to show you how well-rounded Ghogar really is. Once again, a solid building block for “Thung Kru Team”.

With the 4th Overall pick of the 2015 TBF Draft, the Mahasarakham Bloody Buffaloes select…

TK: He might be an over-thought right now with his injury but the images of his performance in the TBL2014 is still on my mind. This is one of the quickest point guards in Thailand with a killer First Step and three-point range. He’s also very comfortable with slashing and kicking out. In addition to all of that, he also has the looks and I’m quite sure that my pick is one of the better looking out of all of the 1st round selections.
KUK: Wait…was that a shot fired at Arm?
KONK: Dammit, I thought he would slide down the draft with his injuries.
TK: That feeling hurts doesn’t it?

One of the stars of the TBL2014, Bas showed that he is a solid point guard capable of scoring (8.87 points per game, 30% from three-points), passing (2nd in total assists and 5th in assists per game), and defense (1st in total steals and 3rd in steals per game, minimum 5 games played). We haven’t yet to see him play much in the BTSL, but he is a National Team player nonetheless so the quality is there. His light frame might be something to worry about, but when you have a first step that quick and the awareness for kick out passes like Kannut does, it’s something that can be looked over.

After a wild first round of First Round picks we have seen 2 point guards drafted (1 with the 1st Overall Pick), a Forward, and an Inside Player. In general, teams have seemed to have a different approach to how they will build into this draft. For me, I feel that all of these picks are deserving of their status as a First Round pick. Their might be some other guys left that are worthy of being the cornerstone of a franchise, but since we only have 4 teams, there can only be 4 First Round picks. Here’s the Summary:

That wraps up the first round and we get to see the first building block for each team!

Feel free to share your thoughts.
Does every pick deserve their position?
Who would you have drafted in which slot?
Who do you feel were a bit of a reach?
Who else do you think deserved to be a First Round pick?
Share your ideas in the comments section below or at our Facebook page.

Stay tuned for the Second Round. The Mahasarakham Bloody Buffaloes are on the clock….