This whole idea started because I am a petty asshole that never likes how things are. One of my top favorite daydreaming questions is “If I could do this from the start all over again, how would I do it?”. That was what I asked myself while watching a game replay one day, and that’s what has led us here, to the start of the biggest imaginary draft in Thailand Basketball history.

For those who have played NBA 2K or NBA Live, it’s fair to say that we’ve all been through that point that we start a Dynasty/Franchise mode and select the Fantasy Draft option. If I’m going to waste my time trying to run an imaginary franchise, I’m going to start it from scratch. 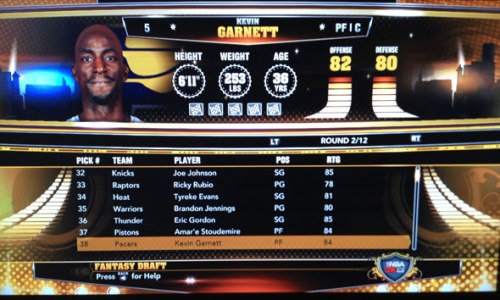 So that’s where this whole TBF Draft originated from. The concept is easy to understand. Throw all the active Thailand Basketball players in to the same talent pool and draft them onto new teams without any restrictions whatsoever. Anyone is up for grabs if your turn to pick comes up.

So that’s the concept. It was easier to execute in the video game with the AI, but now I was alone, and that wasn’t going to work out well. I couldn’t contact the current owners of the Thai teams to join me because of conflicts of interest and other stuff like that, so I decided to run an imaginary new league consisting of 4 newly formed teams ran by 4 new owners. I had to find those owners fast.

The first person I contacted was a well-known acquaintance of mine who has seen this blog from the start and has been a vault of information about Thailand Basketball for my reference. He’s always been a basketball fanatic and knows most of the Thai basketball players on a personal level. It wouldn’t be an understatement to say that he enjoys playing basketball more than life itself. I texted him with the idea and it didn’t take long for him to say yes. I feel that he wanted to see himself what sort of team he’d be able to form with all the watching and scouting that he has collected over the years. And our first team owner of the Thailand Basketball Fantasy Draft, Akepoch Santiwiriyanon who we shall refer to and “Konk”.

After I secured my first team owner, I immediately asked him if he recommended any other people who might be interested and is knowledgeable in the Thailand Basketball Scene AND is not affiliated or openly biased to any certain Thai team right now. I had a slight idea of whom to contact next, and P’Konk’s (P’ is how we Thais refer to someone who is a senior) recommendation only secured that spot.

I stumbled upon KukThew’s set of pictures while writing about the Thailand Basketball league way back last year, but it wasn’t until the ASEAN Basketball League (ABL) that she firmly set a place on the scene. Her pictures were a sensation in the league and Hi-Tech was known to be among the leaders in In-Game Photography in the league. While her good looks might distract you, you cannot deny the fact that her photos are certainly top-notch and they were referred to in the ABL website numerous times.

It didn’t take long for her to get interested in the Thailand Basketball Draft idea as well, and so the TBF added their first Female team owner.

After I got the second owner, I just did the same thing. I asked the first two owners to recommend me another person and it ended up being the same person I had on my mind.

In Thailand, we have this TV show called “Fan Phun Tae” which gathers a bunch of fanatics on a certain category and have them answer these ridiculous questions and play preposterous games which only the most craziest fanatics could answer/win. They held such an episode for NBA Fanatics and this led us to our third owner.

Say Hello to “Dan” Watcharin Jatuchai. P’Dan joins our gang of team owners and having been the color commentator in the BTSL himself, he will be more than ready to draft the players playing at their top form.

With the three slots now filled, I was left with one vacant slot.
Of course, I immediately put myself in that position because what would be the whole point of this if I don’t get to play as well, right? The final owner, “TK” Sajjatam Kulsomboon.

So there you have it! That will be the line up for the four owners of the imaginary teams in this imaginary league which is about to hold an imaginary draft.

If there is a lesson from all of this, it is that you should always let your imagination run wild.

Next time, we’ll be covering what name each owner will come up for their team and the back story behind it all.
Be sure to stay tuned!