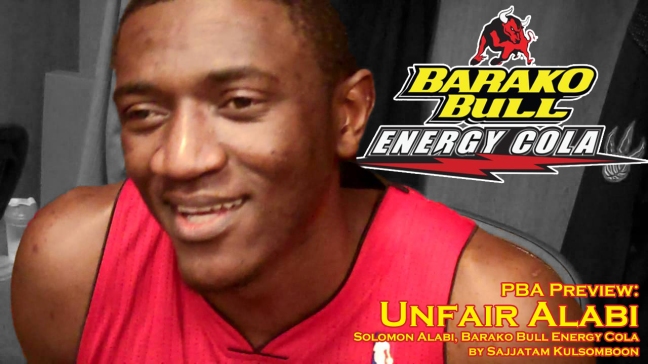 Being Solomon Alabi is unfair sometimes.

Sure, it’s unfair being 7’3″. The rim is so close. Everything seems easy.

It’s unfair to be so physically dominant like Solomon Alabi. Every NBA draft outlet was raving about Solomon Alabi headed into the draft the first thing on their scouting reports was his physical advantage.
Alabi had improved in each year at Florida State, being large piece of the defensively dominant Seminoles squad. He finished his junior year with a blocking rate of 10.56%. Imagine going up for a layup and getting swatted one every ten times. He averaged 1 block per foul as well, and you have to understand how difficult that is.
Alabi was a defensive presence to be reckoned of in the NCAA, and in the PBA where the players are shorter and slightly less athletic, his defense will only be more valuable for the Barako Bulls.

But being Solomon Alabi is unfair sometimes.
Not everyday you encounter a freakishly tall, chiseled, African, basketball players who started off playing soccer before turning to shooting the leather. But once one of those guys do show up, the media is there and ready to peg them as the next Hakeem Olajuwon in the making. They’ll keep saying he has room to grow. That he’s still very raw, still very young. They’ll keep giving hope. If the kid pans out, its great. But if he becomes the next Haseem Thabeet or Saer Sene, well then that’s the kid’s fault. If you were wondering who Saer Sene or Thabeet is, that my point is proven.

He might not have completely panned out in the NBA, but he has credentials that he made the league and played a couple of games there. Entering the PBA, expectations were high for him again.

Alabi is a really talented defensive presence and he will make inside shots tougher for opponents which is a must for a team that allowed the third most shooting percentage around the rim in the Philippines Cup Elimination round (76.92%, as per Humblebola). He’s going to bring that to the table.

But to expect him to be an offensive stud like the more popular imports, might be an unfair expectation on him.
Sure, he’ll get his points from being 7’3″, but it’s not his game to dominate on the offense.

By the way, here’s this interview from ESPN on Solomon Alabi than I happened to run into and really liked.