And Finally, we have our team Dramatic team of the year, the Saigon Heat.

Before we start off the ABL Playoffs 2014, I’d like to use this space here to look back at the regular season numbers and see what we can crunch from that to evaluate out expectations for this year’s playoffs from each team.

The Saigon Heat are easily the most interesting team in the ABL playoffs this year, not because of who they are, but more because what they have been through.

Actually at this point, it’s pretty unclear WHO the Saigon Heat are at this moment. They lost their Head Coach (R.I.P) 13 games into the season and then lost their star player, Dustin Scott, to eligibility issues after their 18th game. Scott was so versatile so he covered up a lot of the activity on the court.

As you can see in the graph, losing Scott means losing a lot of scoring, rebounds, defense, and floor game. Which is a lot.

However, that leads to our first strength of the Saigon Heat: Element of surprise.

After the Heat had found out that Dustin Scott was going to be ineligible two games before their big play-in game against the Indonesia Warriors, they went searching all over the place for a replacement. They ended up with Mark Yee in that game who had a so-so game and missed some crucial free throws in the clutch.They followed that up with putting in Dimitriy Guchko in the next game against Hi-Tech, who caught the Hi-Tech defense off guards and scored 21 points of 5 three pointers without missing and grabbed 15 rebounds.

Now, they are headed into the playoffs and Dustin Scott’s world import spot will be filled in with Dijon Thompson. Dijon was a star for UCLA in his senior season and he has had great success in the Eurocup most recently being named to the First Team All-Eurocup.

Still, that doesn’t guarantee anything about how he will play along with the Heat team, or what kind of role they will put him in and that is where their first opponents, the KL Dragons, will find some difficulty. The other teams coaching staff are probably thinking about throwing away the Heat’s scouting reports a bit now with Thompson coming in and changing the dynamics of this Heat team.

However, this Heat team was not something to laugh about. They might top out in some statistical categories, and if they aren’t, they are probably at the top.

They were anchored in the Regular Season by the Quintuplet of stars, Leo Avenido, Froilan Baguion, David Harrison Arnold, Justin Williams, and the aforementioned Scott. These five guys were probably the best starting 5 in the league before the string of unfortunate events occurred.

That’s the main problem. After those five stars, the talent and production drops off quite drastically. The local players do eventually get their burn, but they don’t have much production to prove themselves yet. 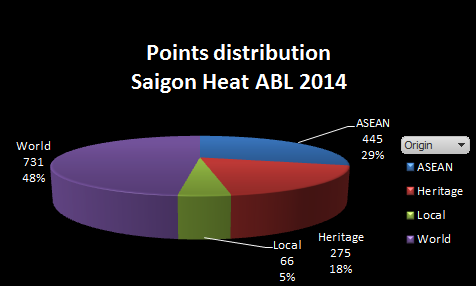 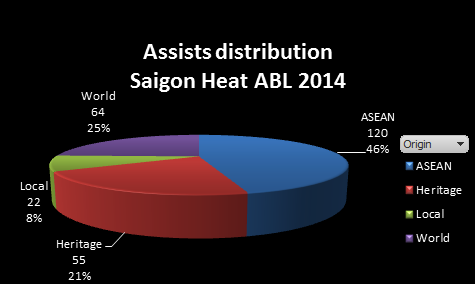 I don’t mean this as a slight to the Locals, they are all very hard working passionate players, but the fact are there and the opposing teams are ready to push the offense to tire and put the starting line up into foul trouble early in the game.

Another thing that came up in the statistics that might be alarming for Saigon Heat: They averaged 3.2 FEWER turnovers in their losses than in their wins. Again, this completely goes against common sense. How is that possible?

Look into the shooting stats and you find the answer:

It would be hard to exactly pinpoint what went wrong here, but it is possible that Justin Williams and Dustin Scott were attempting more long range shots in those loses. With those two shooting more, the shooting numbers go up, the rebounds drop because the main rebounders are out there shooting, and they have less people to go bang inside to draw fouls.

Chemistry is essential here. Dustin Scott was a great locker room presence and was an awesome glue guy for the Heat. We will have to see what kind of player Dijon Thompson will be in the locker room. On paper, Thompson is a perfect fit for the Heat, a scorer that can relieve Justin Williams of his scoring duties and draw more attention from Arnold and Avenido, but basketball isn’t played on paper.

Locals will need to step up. The steps of improvement have been visually for the locals. Man has been confident in shooting and defending and Nguyen Ngoc Thanh has been driving inside well, but they are still a bit away from actually posing a threat to opposing teams. If one or two locals can prove themselves in this 2014 ABL Playoffs, the Heat will make a big stride forward.

The Pistons probably didn’t have the kind of roller coaster season that the Saigon Heat have had, but the players they had fit too well.

Ben Wallace and Justin Williams are both defensive minded centers who both poorly shoot free throws.

Dijon Thompson could be a late season gift wrapped up and sent to the Heat’s doorstep, like Rasheed Wallace.

Leo Avenido and Tayshaun Prince are both long armed three point shooters that can defend down to the power forward position.

Rip Hamilton and David Arnold are smooth midrange shooters and can hit the shot of out of the screens as well.

Finally, Froilan Baguion and Chauncy Billups are the same sort of team leaders and even though their styles of play are a bit in contrast, you can’t deny that they both have big hearts.

Again, I might have been reaching a bit with this comparison, but it’s all fun and games.

The Heat are scheduled to play the KL Dragons on the 29th of October at 8.30PM at MABA Stadium for Game 1.

They will play on the 2nd of November at 4.00PM at CIS Arena for Game 2

If necessary, Game 3 will be played on the 4th of November at MABA Stadium for the Final Showdown.

That wraps it up for this year 2014 ABL Playoff preview. Hope this will be as an entertaining playoff as the regular season has been.