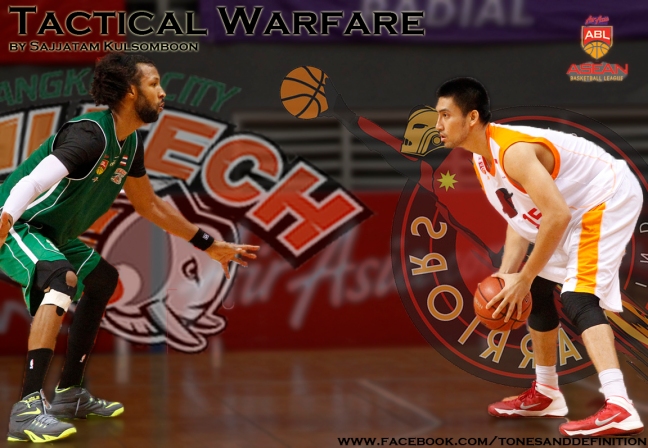 Basketball is fun because of all of the dunks that display unbelievable aerial abilities or the wild shots and buzzer beaters. Even a bounce pass can be fun in the right situation and circumstances. But amid all of that, one of the more entertaining parts of basketball is all that is going on behind the curtains.

The morning before the game, ASEAN Basketball League’s facebook page announced Indonesia Warrior’s signing of recent Thailand Basketball League’s Finals MVP, Michael Fey (who has been covered here, here, and here). Fey would be the fifth world import in the Warriors line up this season.

Tremayne Johnson has been with the Warriors since day one, and he has been their main offensive weapon since then. 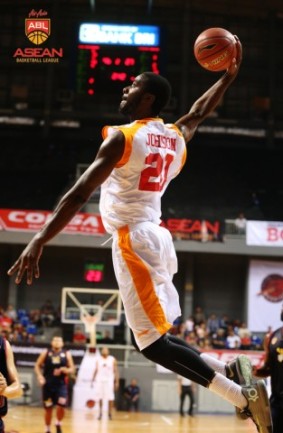 Tremayne played as the solo import until the Warriors eventually signed Chris Ellis and John Smith Jr. Chris was an awesomely efficient scorer, going for 17.0 points/game on 60% eFG and 60% True Shooting easily being in the top 5 in the ABL of both catagories. 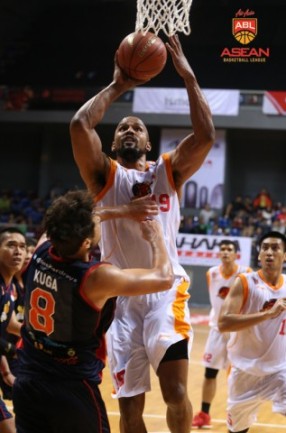 Chris Ellis reportedly suffered a knee injury, and the Warriors then replaced him with Justin Howard. Justin Howard came in for two games and he scored and rebounded well during that span (13.5 points/game and 13.5 rebounds/game), but he was a bit turnover prone and didn’t really defend the paint that well for a 7 footer. 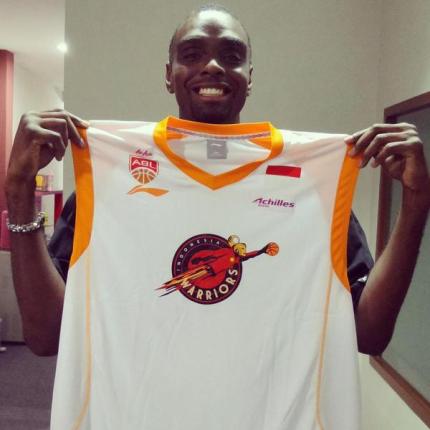 The Warriors moved on with Howard , who recently signed with the Singapore Slingers, and added O’Neal Mims. 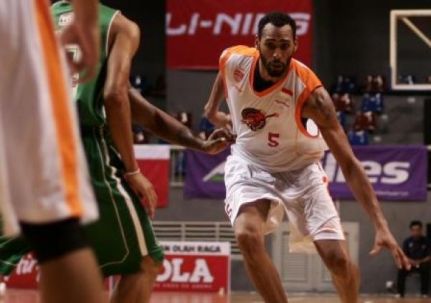 Mims was a workhorse on defense for the Warriors, ranking top five in the league in Steal% (4.6%) and Block% (4.5%) and his offense was pretty efficient, topping a bit over 50% in both eFG% and True Shooting% for an average of 15.0 points/game. He seemed to fit well in the system, being the second fiddle workhorse a la Steve Thomas to Chris Charles, Kyle Jeffers to Doir Lowhorn, or Dustin Scott to Justin Williams.

O’Neal Mims had a good run with the team, being a part of a three game winning streak against the top 3 teams of the ABL and never having lost a game. But then on the morning of the start of their potential 4th game winning streak, news broke of their signing of Michael Fey.

Having been a follower of the Thailand Basketball League (TBL), Michael Fey is a name that I am quite familiar with. The TBL Finals MVP averaged 15.3 point/game, good for 6th in the league, and 8.5 rebounds/game, good for 8th. 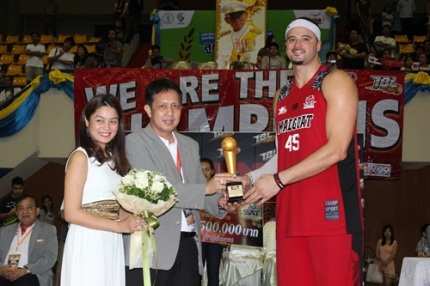 I know him as the inside player who operates well away from the basket as a very good mid-range shooter and a good passer from the free throw line. But Fey’s game was effective in the TBL for a couple of reasons

Teams would find it difficult to put a big guy on Fey, leaving Chaiwat with the size mismatch. If they put a big guy on Chaiwat, Fey would have the height advantage to get his shots off or pass around the ball more comfortably. And you don’t want Fey to get those midrange shots off too easily.

But here in the Indonesia Warriors system, Fey does not have the privilege of playing with another bruising big as he is the bruising big or at least that is probably the role team management imagined for him. The Warriors locals don’t have a true big guy (but then again, other than Devin Goh, who is?) and Tremayne Johnson is most effective operating from the perimeter. In this game, you could see that Michael Fey did seem a bit uncomfortable and confused from time to time.

Of course, this is just the first game of him with the team and we will be able to see how that progresses this Sunday when they play the Heat. It will be interesting to see how Fey will mesh and how the coaching staff will make it work. Former NBA Champions found a way to run a stretch four like Chris Bosh at Center and LeBron James at Point Power Forward, so it’s not like it can’t be done and Fey and Johnson showed signs of potential chemistry in some plays.

This was an interesting Tactical signing for the Warriors management who seemed like they were doing well with O’Neal Mims. September 15 was the deadline for the roster registration for the ABL, so teams are stuck with what they have now and we’ll see how that progresses for each team.

The score was tight throughout the game. Hitech had an 8 point lead in the second quarter, but couldn’t capitalize on that and the Warriors fought back to eventually take the lead two times in the third quarter.

The Warriors had kept it close with good zone defense rotation, moving out quickly on the Hitech three point shooters. On offense, they moved the ball nicely. The key man for that was Arki Dikania Wisu, one of the top local players in the ABL. 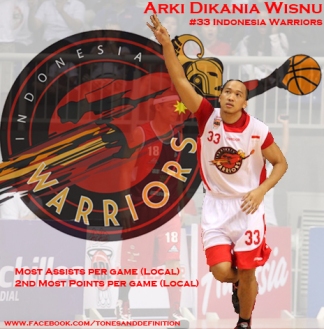 Wisnu is one of the best at penetrating the defense in this league, and he can do it from the perimeter or from the post, which he displayed many times in this game. Once he does get inside, not only is he an above average finisher, he has a knack of making good passes out of the crowded paint to the outside shooters.

D is for Defense

Talking about top local players, it is inevitable to mention Wuttipong “Reuben” Dasom. One of the better local scorers that excels in getting open for easy layups, open jumpshots, or electrifying dunks.

You may remember him for his dunks, but in my opinion, Reuben is able to get enough playing time to be reliable on offense because of his defense. Reuben got the assignment to guard the Warriors leading scorer, Tremayne Johnson, for most of the game and did a very good job.

In the end, TJ scored (18 points) a point shy of his average (19.14 points/game) but he did it solely off three pointers (4-6) and free throws (6-8) while missing all of his Field Goals (0-12) where he usually makes about 4.5 field goals/game. As a defender, you want the offense to do what they are not used to or do inefficiently and Reuben succedded in doing that.

Reuben has been a great defender, always being pitted against the opposing teams ace, as seen here guarding one of Thailand’s top talents, Ratdech Kruatiwa:

And it is fun watching him develop into a reliable two way player. You can’t help but picture him in that Kawhii Leonard role of the San Antonio Spurs. 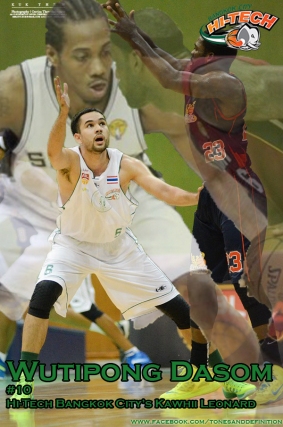 As mentioned, it was a tight game for three quarters. Headed into the fourth quarter, the Warriors were still trailing. Things had to be shaken up. So they switched from 2-3 zone to man-to-man defense.

And all hell broke loose.

I understand the rationale behind switching from zone to man to press the ball more to get ahead, but it gets a lot harder to help on penetrations and on inside posts. So Hi-Tech penetrated and posted inside.

Canada shredded his defender and got inside the paint at will. Other defenders collapsed on him, usually multiple defenders, leaving a lot of guys open. Canada would kick out to the perimeter, and perimeter players would move the ball smartly for the easy shot. Even when the defense settled down a bit, Big Steve Thomas would use his soft touch to put in the final two daggers.

Steve was be booed throughout the whole game during his free throws:

But in the end, he is still very beloved by the Indonesia Warriors fans, whom he had played for last year.

A scary moment for Hi-Tech fans after an Arki Wisnu drive which Wattana Sutisin fouled on. After stumbling back a bit, Suttisin walked for a couple of steps before finally take the knee and requesting a substitution.

Upon hearing the boos from the stands, I understand that they might have been wondering if he was feigning the injury as it seemed like here was little contact on that play. So to make the record clear, Sutisin had encountered a road accident earlier this year, causing him to miss all but the last 4 games of the season. The accident effected around his abdomen area, so that drive from Wisnu might have accidentally hit a spot that brought up the pain again. We wish a speedy recovery to Wattana Sutisin as he has been a very compotent scorer for the team as well.

Now for your commercial break!

So here in this recap, we got to focus on the tactical warfares behind the curtains of the stage that is the hardwood, whether it is the signing of Michael Fey or the defensive schemes of the Indonesia Warriors or how Hi-Tech countered to those defensive schemes. It’s these small bits and details that make basketball such a fun sport to spectate.

That’ll be all. Until next time.

Feature Image Courtesy of the ASEAN Basketball League website; Poorly edited by myself