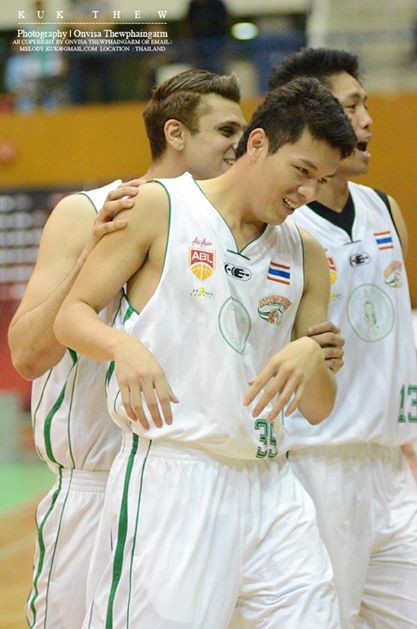 If there’s something basketball has taught me, it’s that if you pay attention enough, if you care about all the little details enough, eventually you will get a learn something out of it. Maybe it will be something of little significance, like learning about why Gilbert Arenas picked the number 0 as his jersey number. Sometimes you learn things that will make you better as a basketball player, like how to run a pick and roll properly, or how to defend a pick and roll properly against a certain opponent.

But sometimes, if you pay enough attention to the details, you get a whole life lesson like the benefits of pushing your own limits to exceed expectations.

Laskar Dreya South Sumatra came into this game on a five game losing streak debut to the ABL by an average of 23.2 points game. The games were pretty lopsided, which the winning side had used to their advantage to rest their starters.
Hi-Tech Bangkok City were on a four game winning streak won by an average of 13.2 points per game.

Yet here we were with 28 seconds left on the shot clock in the fourth quarter and the Bangkokians were up by a whopping 1 point. They were still pretty calm, as they had possession of the ball. All they needed to do was burn off 24 seconds to get a good shot off. Even if they got a bad shot off, they still had one of the best offensive rebounding duos in the league to corral that missed shot. Even if they couldn’t get the rebound, if they managed the shot clock properly, that would leave no more than 7 seconds on the clock for Laskar Dreya to make a counter attack. 7 seconds is more than enough to get a good look at the basket, but here’s what happened:

With Laskar Dreya playing a 2-3 zone and having competent ball handlers at the wings plus Jerick Canada, it is curious as to why they decided to give the ball to Christian Charles 20 feet from the hoop. No offense to Charles, he is definitely worthy of being the go-to guy and should be the first option in late game situations, but for him to receive the ball on the perimeter with a hound like Rexander Leynes waiting to pounce, this was probably not the best thing to do. 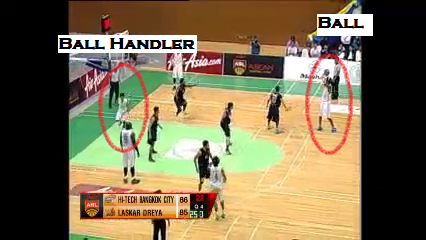 As seen in the clip, Leynes eventually got the steal and made a run for the other basket (quite clearly stepping out of bounds first though). 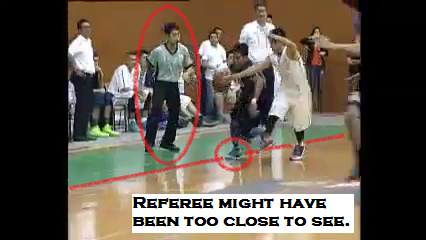 The key to this game being so close was that Laskar Dreya were forcing turnovers and finishing them efficiently. Hi-Tech gave away 15 turnovers and Laskar Dreya converted those turnovers for 17 points. Laskar Dreya pressed and ran just enough to keep the deficit within striking distance until finally the Hi-Tech offense ran into a stutter and allowed Laskar Dreya back in the game. 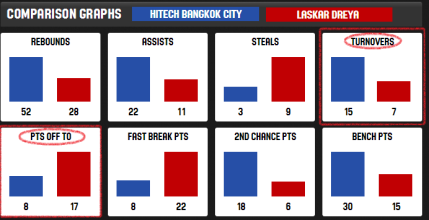 After the steal from Christian Charles, Rexander Leynes went sprinting towards the other basket and was fouled. Having been down for most of the game, suddenly they had a chance to take the lead with 15 seconds left on the clock. Leynes hit the first free throw, to be celebrated with a much emotional Nikola Kuga:

But then he missed the second shot. Laskar Dreya having been out-rebounded the entire game (+24 total rebound advantage to Hi-Tech Bangkok City) somehow ended up with the offensive rebound, the ball, and a chance for glory.

Leynes made a drive to the basket with a marvelous spin move and got a pretty decent floater at the basket, but the ball didn’t fall his way and we were headed in to overtime.

Other than continuously forcing turnovers, Laskar Dreya made it pretty clear throughout the game that their gameplan was to be as physical as physically possible with Steve Thomas and Chris Charles.

Charles found his way around this ploy, as he is capable of also being nimble en route to an MVP-calibre stat line of 37 points (11-14 FT shooting), 15 rebounds, 5 block shots, and only one foul. Thomas on the other hand,struggled a bit more. Though he ended with a monster stat line of 24 points, 14 rebounds and 4 assists, Steve only managed 39% free throw shooting (7-18, leaving 11 points off the board). He also wound up with 4 personal fouls, including one very dangerous retaliation foul on Rexander Leynes.

I understand that Steve might have been frustrated for having to endure that sort of physicality form Laskar Dreya for the entire game. I understand and admire him for having kept that in for so long.
But as a leader of the team, you can’t give the other team a chance to get two free shots and an attempt to close the gap to 3-4 points within the last 33 seconds by making an unsportsmanlike foul.

Among the fastbreaks and scoring off turnovers for Laskar Dreya, the main core of this offense was the slashing ability of the duo, Falando Jones and Rexander Leynes (Slash Brothers?)

Leynes is another Philippino ASEAN Import who mans the point guard position for an ABL squad. Interestingly, all play very different styles of basketball, which in turn makes each team quite significantly different in identity.

Al Vergera of the the Singapore Slingers is a veteran point guard who finds his pace calmly and doesn’t force much.

Rexander Leynes of Laskar Dreya on the other hand is like a rocket. He goes fast and hard into the paint to get his points.

To compliment him, is Falando Jones. As of now, he might be a bit underrated as the team’s consecutive losses continue to pile up. But If he is not one of the best players on the league, he is least one of the most athletic.

Jones may not enter the paint as violently as Leynes, but he finds a way to glide in and athletically place the ball into the basket. With these two guys slashing into the paint and newly acquired shooter, Nikola Kuga, waiting for the kick out 3 pointer, Laskar Dreya have a potentially scary perimeter offensive unit.

Pillsbury had a great game coming off the bench for 10 points including 3 quick drives to the basket.Though he is almost always the smallest player on the Court, Pillsbury never backs down on defense and is not afraid to drive to the hoop into the field of towering giants. Kids who think that they are too small to play basketball should reconsider once they see Pillsbury play.

By the way, 18/8/14 was his daughter’s, Penny, second birthday so I’d like to leave some space here to wish Penny a very happy birthday and that she will grow up to be successful in whatever she decides to do.

Nakorn Jaisanuk has had a torrid three-point shooting season hitting only 1-12 from downtown coming into this game. However, this game has been a story about exceeding expectations and that’s what “Rang” Nakorn Jaisanuk certainly did at the best time possible.

In quick instances of this game, we were treated with the match up between Chanachon Klahan and Brian Ilad.

I think if I wrote an entire column about how these two were long lost brothers and finally reunited on the basketball court, no one would even suspect that the story wasn’t real.

First applied by the University of Akron, the idea of putting twitter handles on jerseys seems to be a good idea of getting some additional PR for the team.

As society relies more and more on social media, seeing sports team embracing an applying that trend to their marketing ploys is an entertaining phenomenon to witness.

After watching this game, watching Laskar Dreya continuously digging their way back into the game though eventually prevailing, I got the feeling that I should get something out of this game. It has been an inspiration for me to keep on writing no matter what happens along the way and eventually, all the effort will pay off. I might not be today, but someday that day will come.

Featured Photo by KukThew. May she keep blessing us with these high quality pictures.

The next ABL game for Hi-Tech will be on 19.00 Monday, 25th August at Thai-Japanese Stadium where they will be facing a revamped Indonesia Warriors. If the schedule holds up, this means that they will have one days rest after dueling it out in the decisive game 3 of the Thailand Basketball League Finals which is to be played Sunday 24th August. We’ll see how that effects the players. Until then…see you next time.